In our last post, we studied all about proof testing and how it is carried out these days. The reader may also find it of interest to learn how it was carried out in the late 1800s and early 1900s as well. In this post, we will study how testing was done in England during this period, as the tests conducted there were generally regarded to be of high-quality.

It was discussed in our previous post that all firearms that were sold in England had to pass the tests of either the London Proof House or Birmingham Proof House. Even though these two proof houses had different proof-marks, the test procedures they used were identical.
The test procedures specified what types of propellant and bullets and their quantities would be used for testing, depending on the type of firearm being tested. For instance, in the early 1900s, the standard propellants specified for the various tests were powders of the following brands: "Tower Proof", Waltham Abbey's "RFG No. 2" with grain sizes between #4 and #5, Curtis's & Harvey's "TS No. 2", "Colonel Hawker's Duck-Gun Powder" and cordite. Bullets were to be of pure lead, except in the case of rifles where nickel plated bullets were to be used. In the case of shotguns, pellets of size #6 were to be used in the test.
Each manufacturer would deliver firearms to be tested, to a proof-house (either London or Birmingham) in an unmarked condition. The first task at hand was to attach each firearm with a unique identifying number. This ensured that the manufacturer of any particular firearm would be unknown to the testers conducting the tests, so that they would have no opportunity of spoiling the test results if they had a previous prejudice against any particular manufacturer.
The next step was to send the firearms to be tested into a gauging room. This is where the bore of the barrel would be determined. In this room, each tester was equipped with a set of 50-60 gauging plugs from the size of a pea to a couple of inches in diameter. Each tester would determine the exact bore of a barrel using these plugs and then pick up a corresponding steel punch and stamp a number on the barrel corresponding to the plug number that best fit the barrel.
After this, the firearms would be transported a short distance to a loading room. This room was divided into three compartments with very strong brick walls in between, so that in case of an accidental explosion, the damage would be confined to a particular compartment. To minimize casualties in case of accident, only necessary personnel were allowed into these rooms. The floors of these rooms were always kept well swept to ensure that there wouldn't be any loose gunpowder lying around. The floors were also always kept damp for extra safety. In the first compartment, a workman would have a set of numbered copper measuring flasks on a rack. The workman would look at the number stamped on the barrel from the gauging room and pick up the corresponding copper measuring flask and fill it with gunpowder. The measuring flasks were pre-calibrated to charge the barrel with extra gunpowder, depending on the bore of the barrel and how much overcharge was specified by the test procedures. After filling a barrel with gunpowder or an overcharged cartridge, the tester would then add a wad to the barrel and pass it through a small window into the next compartment. In the second compartment, a second workman would fill it with bullets specified for the particular barrel type, then ram the charges home with a copper rod and then pass it to the third compartment. In the third compartment, a workman would prepare the barrels for firing (i.e.) add priming powder or a percussion cap depending on the firearm type.
The prepared firearms would now be moved into the firing room. The firing room was a strongly built building lined with sheet iron and had ventilators that could be operated from outside. The door of this room was also made of iron and the room was designed to contain powerful explosions. Depending on the type of firearms, different proof tests would be carried out (a Provisional Proof Test and a Definitive Proof Test). Some firearm types only required one test (the provisional proof test), but most required both tests to be carried out.

As was mentioned in the previous post, a Provisional Proof Test is a test that is carried out in the early stages of the firearm manufacturing process. It is usually conducted for shotgun barrels, though other firearm types may also have this test. The idea behind a provisional proof test is to discover defects in the barrel early on in the build process, so that the manufacturer does not waste time continuing to build a firearm around a weak barrel. The Definitive Proof Test is generally conducted on a fully assembled firearm and tests the strength of barrel and firing action together.
In the case of the provisional test, the barrels to be tested would be lined up on a grooved rack. A thin line of gunpowder would be poured in a groove in the back, that connected all the barrels together. The thin line of gunpowder would be fired by using a hammer striking a percussion cap and the hammer would be operated from the outside of the firing room. On both sides of the barrels were large heaps of sand to collect all the bullets and ensure that there would be no ricochets. The tester would line up the barrels, leave the room, close all the vents and the door and then pull the firing mechanism trigger from the outside. The thin line of gunpowder would ignite and therefore fire each barrel in sequence. After each barrel in the train had fired, they would open the ventilators and allow the smoke to clear. The barrels would be collected from the room and those that had not fired were reprimed and placed back on the rack. The other barrels would be taken to an inspecting room, where they would be washed and inspected for flaws. In the case of "common barrels", they would be allowed to stand for 24 hours before washing, because any flaws in the barrels would become more obvious by the action of the acid residue of the gunpowder eating into them. All barrels that had no visible flaws would be stamped with the appropriate markings to show that a provisional proof test was done. 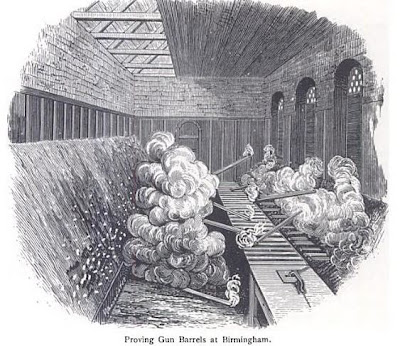 Provisional Proof Test conducted by Birmingham Proof House.
Taken from W.W. Greener's The Gun and Its Development Edition from 1910
Click on image to enlarge.
In the case of definitive proof tests, the test would be conducted with the barrel and its firing action attached to it. The definitive proof test was carried out individually for each firearm (unlike the mass-testing for the provisional test). Each firearm would be fired by using a thin thread to manipulate its firing mechanism from the outside of the room. The definitive proof test verified the strength of the barrel as well as the firing action. With the definitive proof tests, barrels that failed would either burst or suffer bulges. Bulged barrels would be returned to the manufacturer to readjust and resubmit for proof. It is said that in one case, a particular barrel was tested and bulged eight times, before passing on the ninth attempt! Firing actions that failed the definitive test would either blow up to smithereens or stay open at the area where the action meets the barrel. In the second case, the manufacturer would hammer the action back closed and case-harden it and resubmit for proving. Any firearms that fired the test charge successfully would then be taken to the inspecting room and cleaned and then examined for any flaws in the barrel or action. All firearms passing this test would be stamped with appropriate markings to indicate that a definitive proof test was done.
After the tests were passed, the firearms would then be sent back to the main receiving room, where the attached unique identifying numbers would be used to sort the firearms by manufacturer and then they would be shipped back to the manufacturers' factories. Only then would the manufacturers finish the firearm (i.e.) attach a quality stock, add engraving, stamp the manufacturer logo on it, adjust sights etc.
To give an idea of the scale of testing involved here, the Birmingham Proof House was equipped to conduct roughly half a million proof tests every year, during the 19th century. During the period 1804-1815, Birmingham manufacturers produced 3+ million firearms with an average failure rate of 2 per 1000 tests.
The proof test procedures conducted in England were of such a high standard that, in most other countries, the authorities would allow importers to sell all firearms with English proof markings without requiring any testing from their own proof-houses!
Posted by The Editor at 11:54 PM