The most common shooting positions used in rifles are: off-hand, kneeling and prone position. The sitting position is used to a lesser degree and the back position is not used as much these days. We will discuss all of them in this and subsequent posts.

It must be noted in our discussions, that we take the perspective of a right-handed shooter. For left handers, one may substitute "left" for "right" and vice-versa.

The first position we will study is the off-hand position, otherwise known as the standing position: 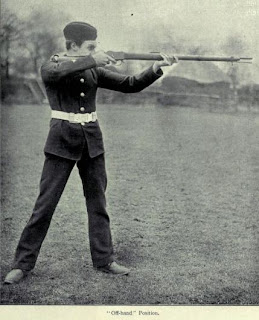 Image taken from W.W. Greener's The Gun and its Development, 1910. Image is now in public domain.
Click on image to enlarge
This is a commonly used position, often used for shorter ranges and in the field. It is also taught by the US military. Notice that the feet are positioned about a shoulder width apart. The left foot is forward and pointing roughly in the direction of the target and the right foot is placed back and is almost at a right angle to the target. The legs are positioned to give the shooter a firm stance. The rifle is positioned across the chest of the shooter and the left hand is located comfortably gripping the fore-grip. Notice that the left elbow is right below the rifle, not angled to one side.

It might be worthwhile to note that in the above image, we notice that the left arm is somewhat extended out. This is called the "arm-out" off-hand position and is more suitable for shooting at moving targets, because it allows the user to rotate the upper body easier to track a target.

For a more static target, some users prefer to position the left arm much closer to the body (i.e. the arm-back offhand stance) 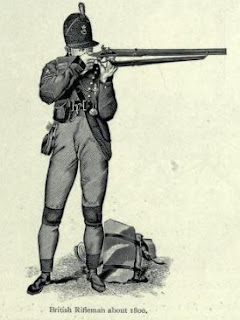 Notice that in the above image, the left hand is positioned close to the rifle action and the left elbow is very close to the body. While the arm-back position allows for more steadiness, it doesn't allow the user to readjust as easily as the arm-out position, if the target moves. Hence, this stance is more commonly used against static targets.

In the next post, we will look at the kneeling position.
Posted by The Editor at 10:09 PM