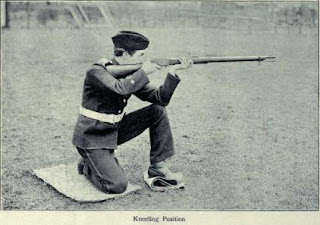 It takes a little while to get used to shooting from this position. Beginning shooters might find this position somewhat more uncomfortable, particularly because of the way the right foot is folded. This position can be quickly got in and out of and it also allows the shooter to use concealment behind low walls, rocks etc.
Posted by The Editor at 11:27 PM