During World War I, aerial combat between aircraft happened for the first time in history. It soon became apparent that machine guns were needed on aircraft, because pilots needed to get a large number of rounds on target to score a kill. However, the high rates of fire were also the cause of certain problems. For one, the frequency of jamming increased with the firing rate. Another problem was how to provide adequate cooling for the barrel after firing a large number of bullets. The gun we will study today attempted to solve these problems in an unusual way.

The Gast gun was invented by Karl Gast, a German, during January 1916. He was working for the Vorwerk Company at this time. Karl Gast's solution to the heating and jamming issues was, rather than using one gun, his idea was to combine two barrels and two actions into a single firearm. What was unique about this mechanism was that upon firing one barrel, the recoil was used to load and charge the second barrel. When the second barrel was fired, the recoil would be used to load and charge the first barrel and so on. Each barrel and action were fed by a separate drum magazine.

Side view of a Gast Machine Gun. Click on image to enlarge.

Gast gun seen from the top. Click on image to enlarge.

Each of these drums held 180 rounds of 7.92x57 mm. Mauser rifle cartridges (also known as 8 mm. Mauser -- it is still a popular hunting cartridge even in the 21st century). Because each barrel would fire alternately, this could easily achieve firing rates of 1600 rounds per minute without overheating or jamming issues. The firearm was also designed for ease of maintenance and could be field stripped in about one minute. Even if there were problems with one side of the weapon, it could still fire single shots from the other barrel. It was also easy to change the ammunition drums and an experienced operator could do this within a few seconds.

Karl Gast first demonstrated this weapon to the German military in August 1917 and they were highly impressed by its design and immediately ordered 3000 guns, with the first 100 guns to be delivered by 1st June 1918. They later changed their minds and ordered 6000 more guns by September 1918.

Plans were also made to manufacture a variant that fired 13x92 mm. TuF ammunition with curved box magazines. 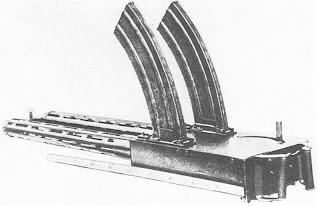 However, this variation of the Gast gun never reached the production stage.

While the gun was very successful, it wasn't very widely used and therefore, the Allies had no idea that it even existed by the time World War I ended. They only found out about it in 1921. Incidentally, Karl Gast had also applied for a US patent in 1920 and finally received it in 1923. The US Army got interested in the design and evaluated one. They found it very reliable, but felt that it didn't offer enough of an advantage over their existing machine guns to justify purchasing it.

The Gast gun was not used by the Germans during World War II, but this didn't mean the end of that design. The Soviets borrowed the concept to design their twin-barreled 23 mm. GSh-23 and 30 mm. GSh-30-2 series of autocannons, used on many of their aircraft in the 1960s and 1970s, such as the MiG-21, MiG-23, Sukhoi Su-25, Tupolev Tu-22 and Tu-95, Mi-24 and Mi-35 helicopters etc. A GSh-23 variant is being used in India's new HAL Tejas fighter aircraft in the 21st century, so this innovative design lives on.