What is +P and +P+ Ammunition?

In the world of firearms, some of you readers may have heard about the terms +P and +P+ (pronounced as "Plus-P" and "Plus-P-Plus"). So what is this all about anyway?

In the US, several firearms and ammunition manufacturers jointly formed a standards body called SAAMI (Sporting Arms and Ammunition Manufacturers' Institute) at the behest of the US government in 1926. This organization was charged with setting standards for the firearms industry and contributes its specifications and documentation to the American National Standards Institute (ANSI). All major manufacturers of firearms and ammunition in America are members of the SAAMI association, as are many of the smaller manufacturers. While the SAAMI association requires its members to follow the standards and guidelines that it sets, the US government does NOT enforce the SAAMI standards by law (unlike the European CIP standards, which are a compulsory standard enforced by law in several European countries). It is also not required for a manufacturer to be a member of the SAAMI association either (and some smaller ammunition manufacturers are not and therefore not required to follow SAAMI standards). These two facts are important as we will soon see.

One of the SAAMI association's jobs is to define the maximum pressure allowed to be generated by various cartridge calibers. Some of those standards were defined a long time ago (e.g. 9 mm. Luger, .45 Colt, .38 Special etc.) and it became clear that many modern firearms could easily withstand higher pressures than what the SAAMI standards said, because of improvements in metallurgy techniques. Some law enforcement departments began to clamor for more powerful cartridges to increase the effectiveness of their handguns and some manufacturers began to manufacture +P cartridges, with the +P to indicate that the cartridge was loaded to generate higher pressures than the SAAMI standard. The +P sign would be stamped on the cartridge box and on the base of the cartridge as well. 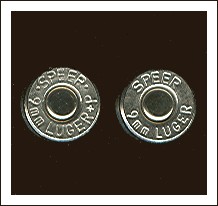 Soon, SAAMI got into the act and established an official +P standard for a few common cartridge types. Typically +P ammunition generates about 10% more pressure than the non +P type, though this is not true for all cartridge types. For instance, plain 9 mm. Luger ammunition is supposed to generate a maximum pressure of 35000 PSI (Pounds per Square Inch), but 9 mm. +P Luger ammunition can generate a maximum pressure of 38500 PSI per the SAAMI standards. The idea behind the +P standards is that older firearms can use the regular ammunition and newer firearms which are built to higher standards may be able to use both regular and +P ammunition safely. While there are SAAMI standards in place for +P ammunition for some calibers (SAAMI only specified them for 5 cartridges types), there are manufacturers that make "+P ammunition" for other calibers as well. Since the SAAMI standards are not enforced by law, manufacturers can mark any ammunition as +P even if SAAMI doesn't have a standard for it. This is even more so for manufacturers who are not members of the SAAMI association.

Soon, some ammunition manufacturers (such as Federal, Winchester and Remington) started making even more powerful ammunition than +P and called these as "+P+". These were meant to be sold to law enforcement officials only, but this is not always enforced. Some think that this was merely a marketing tactic to make it appear as though non-law-enforcement buyers were getting something really special and forbidden. 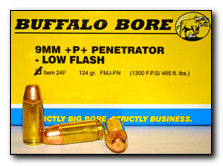 +P+ ammunition standards are not defined by SAAMI, but general industry agreement is that it should be about 10-15% more powerful than +P ammunition. For example, 9 mm. +P+ Luger ammunition generates a maximum pressure of about 42,000 PSI.