M16A4: This rifle is the fourth generation rifle in the M16 series. One of the main differences between this model and the models we've have already studied so far is that the carrying handle on this model is detachable. What the designers did was put picatinny rails on the rifle and also on the hand guards. The carrying handle is attached to the picatinny rail on top and can be removed and replaced with other accessories, such as a reflex sight, night vision device etc. In addition, other accessories may also be attached to the other rail mounts, such as a laser, vertical grip, flash light etc. 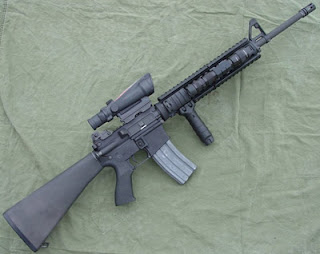 In the above image, note that the carrying handle has been replaced by a telescopic sight called an ACOG (Advanced Combat Optical Gunsight) and the rifle has an additional vertical grip attached to the hand guard in front. The M16A4 has the same firing modes as the M16A2 (i.e. single shot and 3 round burst) and also retains a bunch of other features from it.

The US Marines were the first to adopt this rifle model and are in the process of phasing out their existing M16A2 rifles with the M16A4. It is also used by some other countries' military forces around the world, such as Thailand, Turkey etc.

M4 Carbine: During the Vietnam war, Colt developed a carbine version of the M16A1, called the CAR-15. Around 1988, there came a need for another carbine design and Colt based it off the influential M16A2 design. The M4 carbine features a shorter 14.5 inch barrel and a telescoping stock. Therefore, it is more compact than the M16A2. It also borrows from the M16A4, by incorporating the rails and the detachable carrying handle, therefore allowing it to accept a wide variety of accessories. 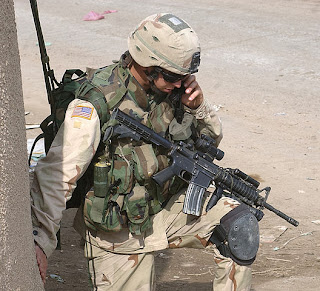 US Soldier carrying a M4 with accessories attached. Click on image to enlarge. Public domain image

Due to its shortened barrel, the ballistic performance of the bullets is slightly worse than the M16A2. However, the smaller length makes it more suitable for close quarter battle. The M4 carbine was first selected for use in 1994, by the US Army, initially to replace the M9 pistol and the M3/M3A1 submachine gun. Later on, they began to replace the M16A2 rifles as well and the US Marines also adopted it for use by officers. Other branches of the military started using it as well and it is also used by other countries around the world.

AR-15: The original prototype of the first M16 model was called the AR-15 (after the company Armalite, which was the original designer of this rifle family). However, after Colt bought the design, they called their model the M16 and made a civilian model of the design in 1963, which they named the AR-15. In this discussion, we will only talk about the civilian models released by Colt and other manufacturers, as few examples of the original Armalite design exist. The AR-15 was designed for civilian sales and while it does have a resemblance to other members of the M16 family, there are some very significant differences. The first major difference is that the AR-15 only has one firing mode (semiautomatic mode, which means you have to pull the trigger each time to shoot a new cartridge). Therefore, it is NOT an assault rifle, since it is incapable of switching firing modes. While the external appearance of an AR-15 is almost identical to a fully automatic M16 family model, the internals are very different. The hammer and trigger are of a different design and the bolt carrier and lower receiver are differently shaped that they cannot be interchanged with a M16 mechanism. This is done to satisfy United States firearm laws that semi-automatic weapons cannot be easily converted to fully-automatic weapons.

Colt AR-15 A3 Carbine Model. Click on image to enlarge.

There are multiple models of AR-15, resembling various other variants of the M16 family. While Colt officially holds the trademark to the term "AR-15", clones are made by many other manufacturers and they are unofficially all referred to as "AR-15". Many of these clones are designed to fire other calibers of ammunition, ranging from small pistol cartridges, to many different rifle calibers and even shotgun shells.

These are only some of the popular variants of the M16 family. There are other international variants that we will study in our next post.