The next shooting sport we will look at is called the Mad Minute. It has its origins in a British Army exercise, which is described in a manual called "The Musketry Regulations, Part I, 1909).

The aim of this exercise is to demonstrate rapid fire shooting with good accuracy. The original exercise required the soldier to fire at an official "Second Class Figure" target, at a distance of 300 yards, using a Lee-Enfield service rifle and hit it at least 15 times within one minute. 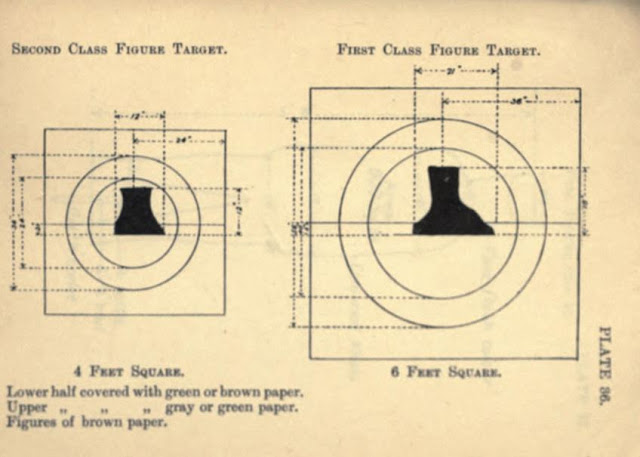 The figure in the middle of the target is intended to resemble the silhouette of a man with a rifle peering out of a trench and measures about 12 inches x 12 inches. The next image shows a close up of the silhouette, including details of the actual colors used. 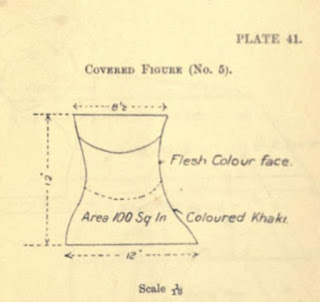 Details of the silhouette. Click on the image to enlarge. Public domain image.

As this was before World War I, notice that the silhouette resembles a man wearing a cloth cap.

A Lee-Enfield Mark I rifle. Click on the image to enlarge.

The soldier was allowed to load the rifle with one cartridge in the chamber and four in the magazine and get into the prone position. The target would then appear at a distance of 300 yards and the soldier would be expected to shoot with it. Reloading was allowed in groups of five cartridges from a pouch or bandoleer and the total time of the exercise was one minute.

As long as the target was hit anywhere with a bullet, that counted as a hit. However, points were scored as follows: hitting the silhouette scored 4 points, hitting inside the inner ring scored 3 points, hitting inside the outer ring scored two points. Soldiers would be classified based on their accuracy, as marksmen, first-class shot, second-class shot and third-class shot. This exercise was one of a set of training exercises to grade soldiers. People who scored enough points to be classified as "marksmen" were given extra pay and a special crossed-rifles badge.

While the exercise only required 15 hits on target within a minute, many people would continue to fire even after 15 hits, to see how many times they could hit the target within that one minute. The smooth operation of the Lee-Enfield rifle's bolt action allowed soldiers to fire rapidly and accurately. Several people in the British Army could hit the target over 30 times within this time period! There are records of soldiers in the British Army scoring 36 or 38 hits within a minute at 300 yards.

By the time World War I started, the average British soldier was a better shot than his French or German counterpart. During the Battle of Mons, several German units reported that they were facing British troops armed with machine guns, when in reality, it was groups of riflemen firing rapidly using their bolt-action Lee-Enfield rifles.

These days, while this exercise is no longer part of military training, some people still organize "mad minute" competitions to see how many hits can be scored in a minute.