In today's post, we will study a submachine gun that was in US service for 50 years and is still used by some military forces elsewhere in the world. Today's post will study about the famous M3 and M3A1 submachine guns, more popularly known as "grease guns".

The origin of this design has to do with the onset of World War II. In Europe, the Germans had developed the MP-40 submachine gun and the British had the Sten submachine gun. Both these weapons were chambered to fire the reliable 9x19 mm. Luger cartridge. In 1941, the US Army Ordnance Board conducted some studies on the effectiveness of these weapons on the battlefield and determined that there was a need for similar weapons for the US military as well. At that time, the US military had already adopted the Thompson submachine guns (which were developed at the end of World War I) into service in 1938, but the Tommy guns were relatively expensive to manufacture. The Ordnance Board wanted a weapon that could fire the same .45 ACP cartridge of the Thompson, but which could be manufactured much cheaper and could be fired as accurately as well.


The task of designing this weapon fell to George Hyde of General Motors' Inland Division. George Hyde was actually of German descent and had emigrated to the US in 1927, whereupon he changed the spelling of his last name from "Heide" to "Hyde". He was a well known gun designer in 1941 and was put in charge of designing the new weapon. Meanwhile, another engineer named Frederick Sampson was put in charge of preparing the tooling for mass production of this weapon. During the design phase, a conversion kit was also designed, which would allow the user to quickly convert the gun from firing .45 ACP to firing the 9 mm. Luger cartridge.

The prototypes were completed in late 1942 and approved for mass production. The Guide Lamp division of General Motors (the same people that manufactured the FP-45 Liberator pistol) was put in charge of manufacturing it. While the weapon was given the official designation of "U.S. Submachine Gun, Caliber .45, M3", many people noticed that it resembled grease guns used by automobile mechanics and therefore, the new weapon was nicknamed the "Grease Gun". 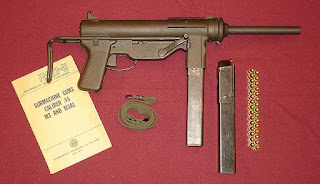 The M3 Grease Gun. Click on the image to enlarge.
Image licensed under the Creative Commons Share-Alike 3.0 Unported license by Curiosandrelics

The M3 was designed to be cheap. The manufacturing cost of one of these in World War II was around $18. Only three parts, the bolt, the barrel and the firing mechanism, were precisely machined. Most of the other parts of this gun were manufactured by using metal stamping and pressing technologies. Spot welding and seam welding were used to join most of the parts together and some other parts were riveted together. These processes allowed the gun to be manufactured very rapidly and with low cost. The stock was simply made from a single steel rod, which was bent into shape. The ends of the stock were drilled and tapped, so that it could be used as a cleaning rod, as well as a disassembly tool. In the M3A1 model, the stock also had a tool welded to it, to be used to load a magazine. The safety was a projection on the inside of the ejection port dust cover, which locked the bolt into the forward or rear positions. However, since the metal around the dust cover was so thin, it could get bent easily and the safety mechanism wouldn't work any more.

The two halves of the receiver were made by stamping sheet steel and then the two halves were welded together. The bolt was made heavy and made to run on two parallel guide rods, which had twin return springs. This allowed the receiver to be made to looser tolerances. The barrel was cold swaged to save time and cost. The weapon was designed to be striker fired, with a fixed firing pin inside the bolt.

When the M3 first entered service, no replacement parts were supplied. The weapon was originally intended to be a low-cost tool that could be discarded when it ceased working. However, due to a temporary shortage of M3s in the middle of 1944, the US Army Ordnance workshops manufactured some spare parts to keep existing weapons operational. There were also a number of issues with the M3 and several improvements were incorporated into the M3A1 model, which went into service in December 1944. During the Korean war, existing M3 guns were converted to the M3A1 standard.

While it was hoped that this gun would be produced in large numbers to replace the Thompson submachine gun in US service, this did not happen and there were about three times as many Tommy guns in service than M3/M3A1 at the end of World War II.

Due to its cheap cost and portability of the weapon, it was issued to paratroopers, tank crews and truck drivers. Even though it was withdrawn from frontline service in the US military in 1957, they were still issued to tank and truck drivers and were carried by US tanks during the 1991 Gulf war. The M3A1s were finally replaced starting in 1992, with the M4 carbine. That means it served in the US military for 50 years (1942 - 1992). It is still used by military forces in other parts of the world.