The History of Saltpeter - II

In the fifteenth and sixteenth centuries in Europe, saltpeter's purpose was well understood in the manufacture of gunpowder, but its sources were not. People were not too sure if it could be mined as a mineral or grown in a field like crops. As late as the 1770s, one noted chemistry lecturer admitted that 'we are much in the dark as to the origin and generation of saltpeter', although he knew that it was to be found around 'earth and stones that have been impregnated with animal or vegetable juices susceptible of putrefaction, and have long been exposed to the air... It is a product of elements, deposited in the bosom of the earth... and may not improperly be called the universal and unspecific mercury.' As saltpeter is found as an efflorescence on the surface of the earth, it was assumed by many chemists that it was of aerial origin. In 1821, John Davy, the brother of noted chemist, Sir Humphry Davy, after examining some niter-yielding caverns of Sri Lanka, concluded that it was formed from the nitrogen and oxygen in the air. Around 1890 is when the role of bacteria in the nitrification process was understood. In fact, the full process of nitrification was not understood until the twentieth century.

In some parts of the world blessed with the optimum weather conditions and soil chemistry, saltpeter could be mined right off the ground. However, there are few places in the world with this correct mix of factors: parts of Northern India, Egypt, Spain and the Atacama desert in South America are some of the well known ones. Northern India, in particular, was well known for its saltpeter trade and this was exported to the middle east in the thirteenth and fourteenth centuries, and from then on, to Europe. However, others had discovered artificial methods of making saltpeter as well and these came to European notice as well. We will study the artificial methods of making saltpeter first.

The technology of making saltpeter by artificial means seems to have been invented in Asia and spread westwards into Europe. As might be expected, the Italian states, especially Venice, with their trading interests with the Turkish empire and the middle east, were the first Europeans to gain the knowledge from Asia, of how to produce saltpeter by artificial means. The metallurgist, Vannoccio Biringuccio, from Siena, wrote a well-known book on metalworking, De La Pirotechnia, which was published in 1540, shortly after his death. In this book, along with dealing with metals and alloys, there are notes devoted to saltpeter production. It is known that Biringuccio had a monopoly on saltpeter production in Siena around 1524, so he must have had knowledge of the process before then. This book was copied by several authors and eventually translated into English, and this is how the knowledge of the process gradually spread northwards in Europe.

In most of Europe, and England in particular, they were initially content to simply purchase the ingredients and finished gunpowder from other sources. In particular, trading with the Mediterranean countries for sulfur, saltpeter and gunpowder and northern European countries for saltpeter and gunpowder. Northern Europe was preferred as a source of gunpowder because the commodities were strategically located for military operation on the European continent.

England's need for gunpowder accelerated under King Henry VIII. When he invaded France in 1513, his army carried 510 tons of gunpowder with them, but the siege guns consumed 32 tons of powder a day. Very soon, he was importing gunpowder from other European countries. He commissioned a German named Hans Wolf to travel 'from shire to shire, to find a place where there is stuff to make saltpeter of.' His successor, Queen Elizabeth I, faced the Spanish Armada, and caused the demand for gunpowder to go even higher. She granted a Dutchman, one Gerard Honrick, the sum of 300 pounds, to teach her subjects the art of saltpeter making. His rules:


The moistened ingredients were to be layered in beds to which ashes were added (ashes from oak leaves being recommended) and the resulting salts were to be leached out and boiled to form the crystals of saltpeter.

The following instructions come from a book called De re Metallica (it means, On the Nature of Metals in Latin), written by Georg Bauer, better known by his pen name of Georgius Agricola. It was published in 1556 and undoubtedly influenced by the above mentioned De la Pirotechnia. This was an influential book in the fields of chemistry and mining and remained an authoritative text on mining for 180 years after its publication. There is a chapter on saltpeter extraction, which we will describe below: 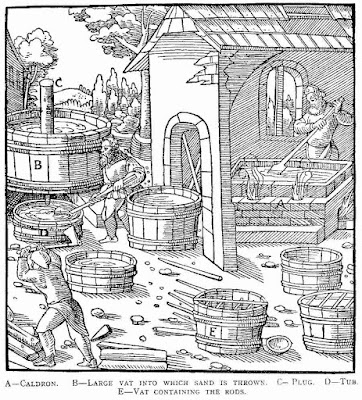 Saltpeter diggers would dig up soil found near stables or dovecotes, where there was a strong concentration of dung. The best saltpeter came from a dry, slightly fatty earth, which if retained for a while in the mouth, has an acrid or salty taste. Then, they would take a large vat, (B in the figure above), and fill it with layers of this soil and a powder in layers of a palm deep. The powder consists of two parts of unslaked lime and three parts of ashes of oak, holmoak, Italian oak or Turkish oak or some such suitable material. Alternate layers of soil and powder are filled in the large vat, to about three quarters of a foot from the top. Then water is added until the vat becomes full. As the water seeps into the material, it dissolves the saltpeter. Then the plug (C in the figure above) is pulled and the solution is drained into smaller tubs (D in the figure above). The solution is then poured into a caldron or reduction pan (A in the figure above), which is a flat shallow pan made of copper, which is placed on top of a fire. Here, the solution is boiled for several hours until about half of the water evaporates, and the solution is allowed to settle down. Any impurities in the solution form a dirty scum on top, which is then removed. Then it is boiled again and lye and rock alum are added to remove any further impurities and it is boiled again leaving behind a concentrated solution of saltpeter liquor. Then the concentrated solution is transferred to crystallization vats (E in the figure above). These vats have copper rods that act as nucleation sites for crystals of saltpeter to form on them. After three of four days, the rods are removed and the saltpeter crystals scraped off them. The solution left behind in the vats is partially used to wash the crystals after they are scraped off, and the rest of it is reboiled to concentrate the solution even more. The washed saltpeter crystals are placed on boards to drain and dry up.

Of course, as the demand for gunpowder and hence, saltpeter, went up due to the numerous wars in Europe, stables and dovecotes didn't provide enough saltpeter. The next solution was niter beds, which we will study in our next post.