A few posts earlier, we saw a mention of something called "black powder substitute". We will study more about this topic in today's post.

As we saw in several posts on the topic of black powders, it is a mixture that was used as a propellant for hundreds of years. Some of the problems with using black powder include

The most common black powder substitute in use today is called "Pyrodex", which was invented by the Hodgdon Powder Company in 1975. 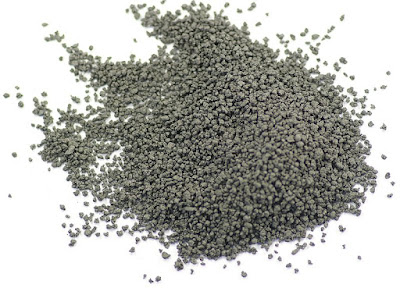 Ordinary black powder consists of  just saltpeter (potassium nitrate), sulfur and charcoal (carbon). Pyrodex also has these three ingredients, but also contains graphite, potassium perchlorate and some other proprietary ingredients. These additional ingredients make the properties of pyrodex behave more like a smokeless powder and therefore, it is not subject to the same strict regulations of black powder. This means that pyrodex doesn't ignite as easily as black powder and can be stored and transported just like a smokeless powder, which is why many retailers sell it.

It must be remembered that muzzleloading weapons are commonly loaded by volume using measuring tubes, this works out great when using a volume equivalent powder like pyrodex. However, black powder cartridges are loaded by weight. Therefore, if using pyrodex instead of black powder to load a cartridge, the user must actually load a lesser weight of pyrodex to retain the same amount of propulsive force.

Pyrodex powder has a similar burning sulfur smell as black powder and is also very corrosive in nature and produces about the same amount of fouling as ordinary black powder. Therefore, users need to perform the same cleaning procedures as when using normal black powder. However, since pyrodex is less susceptible to ignition, it is subject to the same regulations as smokeless powder, instead of the the much stricter regulations of black powder.

These days, pyrodex is also sold in pellet form, such as the image below: 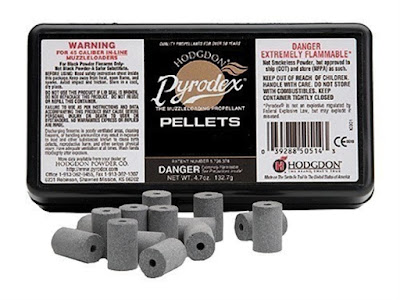 With this type of pyrodex, the user doesn't have to use a measuring tube to measure out the powder, since the pellets are all of a certain specific size. Instead the user simply takes a pellet or two and loads it directly into the firearm.

We will study more about black powder substitutes in the next few posts.