In the meat processing industry, there are certain tools that are used to enable a quick humane death of a food animal. There are two basic types of firearms used here: (a) captive bolt type and (b) free bullet type. We will study both types in this post.

The first captive bolt pistol was invented by one Dr. Hugo Heiss of Straubing, Bavaria, Germany in 1903. The captive bolt type of firearm serves to stun an animal into unconsciousness, so it may then be processed. The pistol is placed against the skull of the animal and the trigger is pulled. The captive bolt pistol, as its name indicates, does NOT actually fire a bullet. Instead, it uses the force of compressed air, or a blank cartridge, to push a bolt forward with great force, which drives it into the animal's skull, thereby stunning it. After the blow is struck, spring tension pushes the bolt back into the device, as the figure below illustrates: 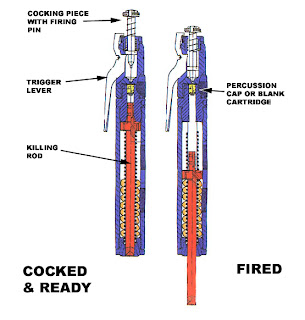 There are two types of captive bolt pistol: (a) the penetrating type, where the bolt has a sharpened tip and actually penetrates the skull into the brain of the animal and (b) non-penetrating type, where the bolt has a blunt rounded tip and doesn't penetrate the skull, but uses the concussive force generated to stun the animal. The pictures below show examples of both types:

Captive bolt pistol with non-penetrating bolt. Click on image to enlarge
Captive bolt penetrating type pistols driven by compressed air are now banned in the United States after a case of BSE (Bovine Spongiform Encephalopathy) was detected in 2004. This is because the compressed air (unlike using a blank cartridge) forces infected brain matter into the bloodstream of the slaughtered animal. Since cattle blood is reprocessed for protein supplements in animal feed and milk replacements for calves, it could potentially spread the disease to other animals. Penetrating type pistols using blank cartridges and non-penetrating types are considered safe.

Since the bolt (i.e. the projectile) does not entirely leave the pistol, captive bolt pistols are not regarded as "firearms" in many jurisdictions and hence do not need any special paperwork.

The other type of firearm used in the meat processing industry is the free bullet type. In this case, a real bullet is indeed fired out. They are essentially small-caliber pistols designed specifically for putting an animal down. One of the first practical ones was designed by the famous English firm W.W. Greener of Birmingham in 1865. Called the Greener Humane Cattle Killer, this device quickly became the standard of the British War Office in the Veterinary and Butchering departments, was adopted by the British Admiralty's Victualling yards and was adopted by many veterinarians and butchers.

It consists of a short rifled barrel with a bell shaped muzzle. The bell serves to muffle the sound of explosion as well as protect the operator from muzzle flash. It has an ordinary spring striker that is struck by a wooden mallet. The piece containing the striker is screwed off the barrel, a cartridge is then inserted into the chamber and the piece screwed back on. The instrument is placed on the animal's forehead and the back end is tapped with a mallet to discharge the weapon. This model uses specially designed low power .310 caliber "cattle killer" cartridges manufactured by Kynoch Ltd.

Even though they weren't considered "firearms", such devices had to undergo proof tests and since W.W. Greener's main factory was located in Birmingham then (the firm's headquarters are now in Chippenham), these devices were marked with Birmingham Proof House markings.

Despite the small caliber bullet, if placed in the correct spot, only a single shot is needed to put an animal down. Since this spot varies for different animals, Greener included a set of diagrams in the package, indicating the best spot to use for different farm animals.

W.W. Greener produced several versions of this, including a pocket version for veterinarians, which was very popular. The model finally became obsolete in the 1960s when its unique .310 caliber cartridges became almost impossible to obtain. Due to demand, the firm has recently started manufacturing a Mark II version that uses a .32 ACP cartridge. W.W. Greener also made other models manufactured in different calibers to put down horses, sheep, pigs etc. and even a special version designed for use on dogs alone.
Posted by The Editor at 10:28 PM