In our previous post, we started a series of posts on firearms being used for purposes other than to take human life. Our previous post dealt with the topic of flare guns (Very pistols). In this post, we will look into uses of firearms in construction (i.e.) a Direct Fastening Tool or Power Actuated Tool.

A powder actuated tool is actually a form of a nail gun, that is used to nail one object to another. Powder actuated tools are used in situations where one needs to nail something on to a hard substrate, such as steel or concrete. The technology relies on exploding a propellant (usually cordite) and using the resulting gas pressure to drive a nail (or, more correctly, a "fastener") instead of a bullet through the surfaces of the objects to be fastened together. The technology was first invented around World War I and used for submarine hunting and there is a US patent from 1921 (US patent # 1365869) describing one. During World War II, the Mine Safety Appliance Corporation (MSA Corp.) designed and built several powder actuated tools for the US Navy, that could be used to temporarily repair steel ship hulls in an emergency.
There are two types of powder actuated tools: high velocity type and low velocity type. In the high velocity type, the propellant directly acts on the fastener. In the low velocity type, the propellant acts on a piston, the other end of which acts on the fastener. A tool is considered low velocity type, if the fastener is driven slower than 492 feet per second. High velocity type tools are illegal to be made or sold in the United States, but there are some made decades ago, still in use by shipbuilding and steel industries, that were grandfathered in because they were made before the law took effect.
Since the fasteners are designed to go through very hard substances, they are usually made from high quality hardened steel. Fasteners need not be just nails, they could be specialized fasteners, such as ones that have a screw thread in the end, to attach a nut.
Powder actuated tools come in several types (e.g.) single shot or magazine type, manually fed (i.e. you load fasteners and cartridges manually) semi-automatic type (i.e. cartridges are automatically loaded from the magazine, but fasteners are manually loaded) or fully automatic type (i.e. both fasteners and cartridges are automatically loaded) etc. 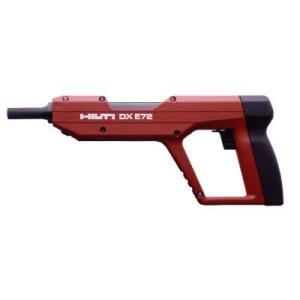 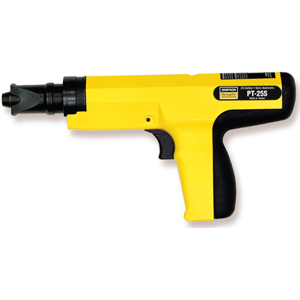 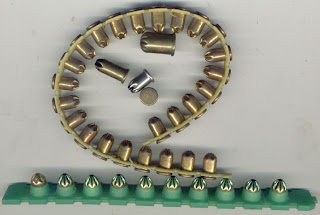 Public domain image of some cartridges used by powder actuated tools.
The main manufacturers of these tools are five companies: Simpsons Strong Tie, Ramset Fastening Systems, Powers Fasteners and Remington from the US and Hilti of Luxembourg. The above images show a Hilti DX E72 and a Simpson PT-25S tool and two strips of cartridges to be used by such tools. The cartridges may be unloaded from the plastic strip and manually loaded one by one for manual type tools, or the entire strip may be loaded directly into the magazine for semi-automatic and automatic type tools. Cartridges are usually sold in boxes of different colors to indicate their relative power. The plastic strip that the cartridges come in is also the same color to indicate the power. The colors used are (in order from weakest to strongest) gray, brown, green, yellow, red and purple. The video below illustrates the use of a powder actuated tool, different fasteners and different cartridge types

In some countries, powder actuated tools are very strictly controlled, e.g. the owner has to register the tool as a firearm and the operator of the tool requires specialized training and has to possess a license to use it. In the US, no new high velocity type tools are allowed to be made or sold, but older high velocity type tools that were made before the laws came in effect are grandfathered in. Low velocity type tools may still be made and sold in the US. US labor law also requires that operators receive special OSHA training before they are allowed to use such tools.
Posted by The Editor at 2:04 AM