In our discussion about carrying conditions a little while ago, it was mentioned that condition 4 is generally used by people who plan to store their firearms for a long while in a gun vault or safe (say, at the end of the hunting season). Which brings up a side topic -- the user also cleans their firearms before putting them into storage. This inspired the next series of articles which are going to deal with the subject of cleaning firearms.

First, we will look at some instructions for sportsmen, reproduced from W.W. Greener's book The Gun and its Development, Ninth Edition from 1910. Bear in mind that this was written for the English sportsman of the early 1900s. So while some of the cleaning equipment and solvents may appear to be a bit antiquated, these were possibly the best available from around 1850 to the early 1900s. The instructions proceed as follows:

To clean a gun after a day's shooting. If a gun be wet, it should be wiped dry at once, but the cleaning of the barrels and breech-action may be left until the sportsman or his servant has time to do it properly.


To clean the barrels. Use the cleaning-rod, with tow and oil, or turpentine. To remove the fouling, put muzzles on a piece of wood, and push the rod down to within an inch of the muzzle, and draw up to the chamber. Do this two or three times; and push right through. Use the bristle brush, or the rod with plenty of flannel; finish with the mop soaked in refined neatsfoot, pure Arctic sperm oil, or vaseline.


Never half-clean the barrels; always wipe them dry and clean before finally oiling, and do not put the mop used for oiling into a foul barrel. To remove leading from the inside of a gun barrel, soak well with turpentine; then clean well with a bristle brush, or even with a wire brush, but never use emery if the shooting qualities of the gun are valued.


Always wipe the bed, face, and joint of the breech-action with an oily rag or flannel. A little linseed oil may be rubbed over the stock occasionally.


Before putting the gun together, ascertain that all the bearing parts are free from dust and grit.


The joint may be lubricated with a mixture of half best Russian tallow and half petroleum. In most hammerless guns, if the cover plate underneath the breech-action body is taken off, the locks may be inspected, oiled, and any rust or clogged oil and dust removed from the bent.


The cocking-lifters of hammerless guns, the holding-down and top bolts, and the triggers, if they have a tendency to clog, may be touched up with a knitting-needle dipped in petroleum. They must be lubricated, whenever they require it, with chronometer oil, Rangoon oil, or finest neatsfoot.


Do not use a feather for the purpose of putting on any lubricant; a wire knitting-needle or bodkin is much better.


To remove rust from the inside or outside of a barrel, procure a tub, and with a kettle of boiling water well scald the barrels inside and out, inserting a wooden peg in one of the barrels to hold them by, wipe perfectly dry with flannel, and then oil. It is as well to do this before putting the gun aside for any length of time.


If the barrels are foul through using inferior powder, and the fouling has become hard and dry, cold water, or hot soap-suds, may be used to cleanse them. Water boiling hot kills rust.


Turpentine, often used successfully to clean the residue from gun barrels, will give great trouble if it gets into the fine-fitting parts of the mechanism of the breech-action and locks, and must therefore be used with care.


Rusty or tight breeches in muzzle-loading barrels may often be turned out, providing the breech-ends of the barrels have been soaked in petroleum, Very obstinate breeches may require to be well heated, as well as lubricated, before they can be turned out, but usually petroleum will be found a sufficient remedy for incipient rust of the working parts. All the parts of the mechanism may be cleaned with petroleum; it removes clogged vegetable and animal oils well.


So that was quite the read, wasn't it. A brief word on some of the solvents mentioned in the book:

Tallow is made by rendering the fat of beef or mutton, especially the fat found around the loins and kidneys of the animal. The process of "rendering" is as follows: raw fat is ground up and then placed in a vessel and heated with steam to drive off the moisture. As the moisture is removed, the fat is released from the fat cells. This fat is percolated off and the remaining solids are squeezed under pressure to release more fat as well (or they may be separated using a centrifuge). The tallow fat is a yellow liquid when hot, but cools down to a white creamy solid at room temperature.

Tallow being made. Note that it is currently a yellow liquid, as the tallow is still hot. 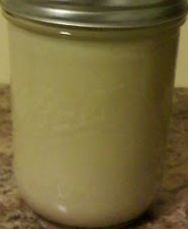 The tallow after it has cooled down to room temperature.

The tallow fat was traditionally used for soap-making, candle-making, food (it didn't spoil easily even without refrigeration), lubrication of  locomotive and steamship engines etc. Russian tallow was traditionally made from mutton mainly and by the 1860s, it was cheaper to obtain in England than English-made tallow and was much more available than tallow from other British colonies such as Australia, New Zealand, the East Indies and South America. People still make tallow today, for use in food (McDonalds used tallow for cooking french fries until 1990), lubrication, high end shaving soap, shoe polish, bio-diesel etc.

Neatsfoot oil is also still around today. Like tallow, it is also made by rendering beef parts, however the parts used are only the shin bones and feet (minus the hooves) of cattle. In fact, the word neat is an old word for cattle, which is where the word neatsfoot comes from. The resulting oil is a light yellow color. Neatsfoot oil is still made today and mainly used for conditioning leather products. It is available at places like amazon.com or Walmart. 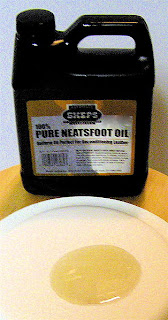 Arctic Sperm Oil is a bit of a misnomer, as it is not actually made from the Sperm whale, but from the Northern Bottlenose whale, Hyperoodon Rostratus. This whale is a lot smaller (adult size is about 32 feet long) than the sperm whale and is found in the northern arctic waters between Europe and North America. Whalers in the 19th century found that this whale is also capable of producing oil that is very similar in chemical composition to Sperm Oil from the Sperm whale, but its oil has a more pronounced tendency to "gum" up at lower temperatures, which is why Arctic Sperm Oil was always sold cheaper than the true Sperm Oil. Because the two oils could not be told apart easily, some unscrupulous producers of Sperm Oil would sometimes adulterate their product with the cheaper Arctic Sperm Oil. Note that while both Sperm Oil and Arctic Sperm Oil were used as lubricants, but Mr. Greener appears to be recommending the cheaper of the two. Both oils were used for oil lamps and candle production, but were gradually replaced by cheaper petroleum products starting in the 1850s. However, they were still used as lubricants well into the 1960s. As of the late 1960s and 1970s, due to whaling restrictions, neither oil is available in the market these days. Animal conservationists will be happy to note that the Northern Bottlenose whale species is thriving again and the species population status is classified as "least concern". Sperm whales are also on the path to recovery and are now classified as "vulnerable" rather than "endangered".

Chronometer oil was made from extracting the oil from the head and jaws of the porpoise family (i.e.) porpoises, pilot whales, killer whales etc., in a very similar process to extracting the oil from sperm whales and bottlenose whales. It was used to lubricate the working parts of fine watches and ships' chronometers. As with sperm oil, it is no longer used and is replaced by other alternatives.

Petroleum is also mentioned. Petroleum was known about 4000 years ago, chiefly because it was available from natural oil springs in the Middle East. By the 1850s, the process of refining petroleum to produce kerosene was invented and drilling started soon after. However, petroleum refining really took off only after automobiles became popular. Before then (as in the early 1900s), it was possible to buy raw petroleum at the local chemists.

Linseed oil is made by pressing seeds of the flax plant. The oil is edible, but it is mainly used in paints, as a hardener for putty, in the manufacture of linoleum and as a wood finish. Linseed oil was traditionally used to finish wood gun stocks for centuries and it still continues to be used for that purpose.

Rangoon oil is actually a heavy petroleum distillate roughly along the lines of kerosene and fuel oil. It has a slow evaporation rate and was used as a rust preventative by the British around the 1850s. They found that it worked rather well, especially in hot and steaming jungles. The name comes from the fact that the first source was from a natural oil well found in Rangoon (now Yangoon), Burma (now Myanmar). 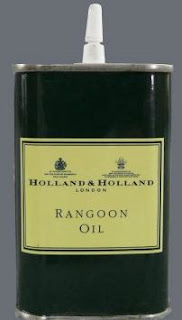 Rangoon oil may still be purchased today, especially from dealers who deal with antique and fine custom-made firearms.
Posted by The Editor at 12:38 AM