During the early 1980s, there was quite a bit of controversy about teflon-coated bullets. Some news articles even went so far as to label them as "cop killers". The reader is probably thinking at this point, "Teflon? Isn't that the stuff that they coat non-stick cooking pans with? Why is that so dangerous?" This article aims to clear up the mystery. 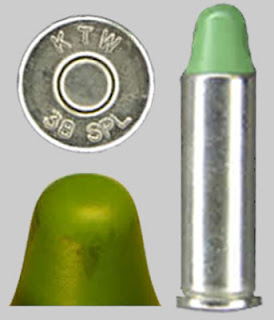 Our story starts in the 1960s, when a company called KTW Inc. (named after the founders last names, Kopsch, Turcos and Ward) from Ohio was trying to develop a bullet with better penetration characteristics. Common handgun bullets which were largely made of lead, had the problem of deforming upon hitting a hard surface, such as a car door or a windshield, and became less effective after they deformed. KTW was trying to invent a better bullet for use by police departments (in fact, one of the founders, Daniel Turcos, was a police sergeant at that time and the other two founders worked in the coroner's office of the Ohio police department).

They eventually settled on a bullet design that consisted of a steel core, with an outer jacket made of hardened brass. This bullet offered much better penetration than older lead bullets, but it had a problem because of the hardened brass layer on the outside of the bullet. This hard layer did not engage the handgun's rifling very well and the friction caused the barrels to wear out prematurely. To reduce the barrel wear, the inventors coated the outside of the bullets with teflon, because teflon is very slippery and is one of the best lubricating substances known to man (the same reasons why teflon is used to coat the surfaces of non-stick pots and pans).

In 1982, NBC ran a special television report on these bullets where they argued that these bullets were a danger to police officers (many police departments had requested NBC not to run that program). After that television show, many American gun-control groups started to call these bullets as "cop killers" because they could penetrate the ballistic vests that many policemen used to wear at that time. Unfortunately, many of these reports wrongly reported that the teflon coating was the reason that these bullets had better penetration, rather than the hardened brass jacket which was the real reason. Movies and TV shows continued to spread the myth that coating ordinary bullets with teflon suddenly made them capable of piercing armor plates.

KTW stopped producing these bullets in the 1990s and they're not encountered as much these days. However, there are other manufacturers who coat their bullets with other lubricating substances, such as molybdenum disulfide, wax, lubalox etc.
Posted by The Editor at 11:54 PM