The M1911 pistol is a legendary design that is still going strong well into the 21st century. We will study some of its history in this post. 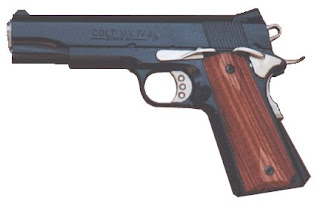 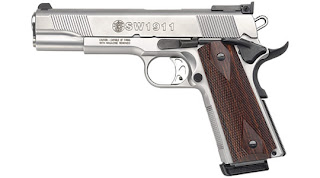 First, we go all the way back to 1884, when Hiram Maxim, an American inventor, was living in England. A couple of years before, he recalled that as a child, he had once tried to fire a rifle and was knocked over by the recoil. This gave him the idea that perhaps he could harness some of the recoil force to automatically extract the old cartridge and chamber a new one. He started work in 1882 and by October 1884, he had a prototype that he could demonstrate publicly.

While Hiram Maxim formed a company to manufacture machine guns, the principle he had demonstrated could also be used by pistols. By 1896, several companies began to manufacture pistols using the same concept of using recoil to automatically load subsequent cartridges.

Fast forward a few years and over in Asia, the Philippines-American war had broken out in 1899 and by 1904, Moro tribesmen in the southern Philippines had started a rebellion. US soldiers, who were then using the issued M1892 revolver, found to their horror, that the .38 Long Colt cartridge that it used was insufficient to stop charging Moro tribesmen, who were reportedly high and filled with religious fervor. Some servicemen found that the older M1873 revolver model, which used a bigger .45 Colt cartridge was much more effective at stopping the tribesmen. Word got back to higher ups and the Chief of Ordinance, General William Crozier, authorized some tests to determine a new sidearm for the US army.

Colonel (later General) John T. Thompson (of Thompson submachine gun fame) declared that among his requirements for the new firearm was that it should fire at least .45 caliber ammunition and should be capable of semi-automatic operation. In 1906, firearms from six different companies were submitted for trial and four were eliminated early on, leaving only designs manufactured by Savage and Colt for final trials. The Colt design was designed by the legendary firearms designer, John Browning. During the final tests conducted in 1910, the Colt design passed through the tests with reportedly no malfunctions, whereas the Savage design had 37 failures. Therefore, the Colt design was officially accepted in March 1911 and designated as the M1911 pistol.

While the military liked the Colt design, they suggested a number of improvements to it. Among them was the addition of the grip safety and the manual safety. After World War I, a number of minor changes were authorized and these were incorporated into the M1911A1 design in 1924. Among these changes were shorter trigger, wider front sight, longer grip safety spur, shorter hammer spur etc. These changes are relatively minor and people who are not very familiar with the design cannot really tell the differences.

Since then, the design has been manufactured by many other companies around the world, with a variety of different materials. Examples of manufacturers include Smith & Wesson, Taurus, Norinco, Wilson Arms, Les Baer etc. They can vary in prices from about $300 to over $5000 for custom made models.

The demand of this classic design is still going strong -- in July 2012, the US Marine Corps announced that they were looking to purchase 12,000 M1911 pistols for use by various personnel.
Posted by The Editor at 2:45 AM