With the London Olympics just around the corner, one of the events held there is the Olympic Trap Shooting competition. In this competition, shooters armed with shotguns attempt to shoot at clay plates that are thrown in the air. These plates are called "clay pigeons" or "birds", the machine that throws them is called a "trap", a hit is referred to as a "kill", a miss as a "bird away". So what are the origins of such terms. 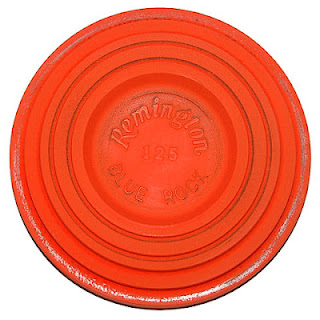 A clay pigeon target made by Remington Inc. Note the name "Blue Rock".
Click on image to enlarge. Image released to public domain by user Jeff Weiss at Wikipedia.

To understand some of these terms, we must go back to the end of the 1700s, when shooting sports were popular among the rich people of England. At that time, the targets were often live pigeons and the first record of such events dates to the 1750s when flintlock firearms were still popular. By the 1830s, it was a well known sport and several shooting clubs were operational around London. Firearm manufacturers even began to manufacture specialized firearms called "pigeon guns" for this purpose and these were often double-barreled percussion shotguns.

One of the oldest shooting clubs from that period was called The Old Hats public house on Uxbridge road at Ealing, near London. The name "Old Hats" derived from the way that the pigeons were held before releasing: small holes were dug into the ground and the birds were put into these holes and old hats were put on these holes to keep the birds in the dark and prevent them from escaping. A system of ropes and pulleys were used to pull the hats away and release the birds when required. The "Red House" in Battersea was another famed London club known for wager shooting. By 1856, the hats were replaced by box traps which had sliding doors operated by ropes. This is why the sport is now called "trap shooting" and not "hat shooting". The Hornsey Wood House club was the first one to start using traps (incidentally, the Hornsey Wood House club was formed in 1810 and was the first dedicated pigeon shooting club).

Now we can go into the origin of some of the terms that are still with us. In the old shooting clubs, when the shooter was ready and wanted a bird to be released, he would yell "pull" to tell the assistant to pull the rope and release the trap door. Modern shooters still yell "pull" when they're prepared to shoot a target for this reason. As you've probably guessed, this is why the target is still called a "bird", a hit is a "kill" and a miss is a "bird away".

If you look at the picture of the clay target above, note that it is named as "Blue Rock". There is a history behind that name as well. The favorite type of bird used in England for pigeon shooting was the Blue Rock pigeon. 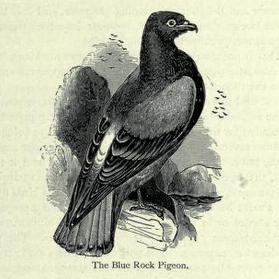 The Blue Rock Pigeon. Image taken from W.W. Greener's The Gun and its Development, which is now in the public domain.


According to W.W. Greener's book The Gun and its Development, the preferred variety was the Lincolnshire Blue Rock, which came from the Lincolnshire district of England. These birds were raised by farmers in Lincolnshire in cotes close to the coast, which made for a particularly hardy bird which was small in body size, but quick in flight and tough. Other Blue Rock pigeons were bred in Oxfordshire and Yorkshire, but were deemed inferior to Lincolnshire birds. Many birds were also imported from Antwerp, but they were not as game as the English birds, per the author. The second best preferred bird was the English Skimmer, which along with the Antwerp birds, were used in the second-rate shooting clubs.

The sport of trap shooting spread from England to Europe and America and became so popular that it became hard to obtain live birds. Therefore, enthusiasts started to make artificial traps to cover the shortage. The first artificial targets were glass balls and these were used from around 1865 to 1880 or so. Glass ball shooting originated in England and rapidly spread to the US. The platter shaped clay pigeons were first made around 1880 by Mr. George Ligowsky in Cleveland and began to replace glass balls almost immediately. These clay traps also gradually began to replace live traps as well and by the 1900 Olympic games held in Paris, trap shooting was an official Olympic sport. Incidentally, the 1900 Olympics had two additional shooting event as well, one using live pigeons as targets and another one that involved shooting running game. It was the only Olympics to have these two events. By 1921, it became illegal to use live targets in England and the clay traps were then used in all shooting contests since. A popular hand trap throwing device was invented in 1927 by Emile Laporte of France, which also gave a huge boost to the sport. This was a spring loaded device that gave a spinning trajectory to the clay pigeon and made the target stable in flight for at least the first 50 meters or so. Trap shooting is still a part of the Olympic games.

Interestingly enough, between 1900 and 1992, the Olympic sport of trap-shooting was one of the few sporting events where men and women competed against each other in the same event. It was the 1996 Olympic games that made separate events for men and women.
Posted by The Editor at 1:11 AM