In our last couple of posts, we looked into some of the equipment used in reloading ammunition: presses and dies and shellholders. In this post, we will look into tools that help measuring the amount of propellants used, as well as measuring the cartridges.

The quantity of propellant used in a cartridge is usually specified by weight in a unit called grains (1 grain is 65 mg. or 0.00014 lbs.) in the US, or grams and milligrams in metric speaking countries. Usually, the weight of the propellant is specified to a precision of 0.1 grains (or 6.5 mg.)

It must be noted that a lot of reloaders measure propellant by volume instead of weight. For this, they use a tool called a powder measure. The basic powder measure is a simple scoop of predetermined volume, such as the example shown below: 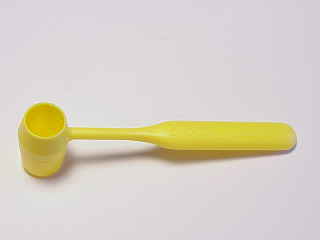 This type of powder scoop costs only about $1 and is made of plastic. The user simply inserts it into the powder container and scoops out enough propellant to fill the bowl. This type of powder measure generally comes with the cheapest reloading kits which are only designed for one particular caliber of cartridge and a specific brand of propellant.

Using such a scoop is somewhat slow. For more faster reloading, people generally use an automatic powder measure 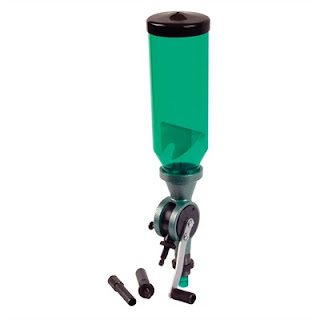 This consists of a hopper that can hold a large quantity of propellant material. The two black cylindrical objects in the bottom left of the picture are metering screws. The powder measure is adjusted to dispense a consistent amount of powder each time the lever in front is turned. The amount to dispense depends on the cartridge type being reloaded. Some automatic powder measures come with different sized nozzle inserts to adjust for different cartridge case mounts.

Regardless of whether a scoop or an automatic powder measure is used to get the powder, most users load the powder into the cartridge using a plastic funnel. 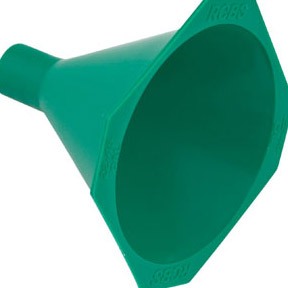 
It is possible to overcharge a cartridge case when measuring by volume, especially with faster burning propellants which use smaller grains. This is why some people prefer to measure propellants by weight, using devices such as the ones discussed below.

A device that is often used for loading propellant is a powder scale. These can come in various models. At the bottom end, we have mechanical balance beams, such as the model shown below: 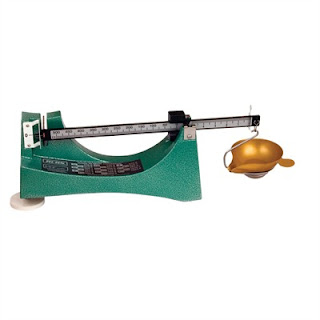 This simply consists of a balance beam with a pan on one end and a sliding weight on the other end. The beam is graduated so that different weights can be measured by moving the sliding weight appropriately to different positions. The powder to be weighed is placed in the pan until the beam is balanced. Models like this allow the user to weigh charges up to 500 grains (32.5 gm. or 0.07 lbs.)  to a precision of about 0.1 grains (6.5 mg. or 0.000014 lbs.). These devices cost about $50 - $70 or so, but require careful measuring and take more time to weigh the powder. 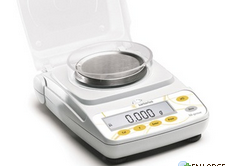 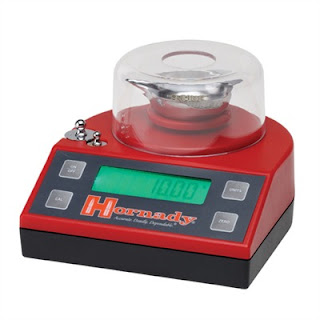 An electronic scale, such as the ones above, can measure loads much more quickly than a mechanical one can. They have plastic lids to eliminate the effect of air currents while measuring weights. They can range in price from $80 (for the second one) to about $325 (for the first one). The first powder scale is much more precise though and can measure weights upto 1850 grains with a precision of 0.02 grains.

In some cases, people have combined the powder measure and the electronic scale to produce combination devices that do both, such as the one shown below: 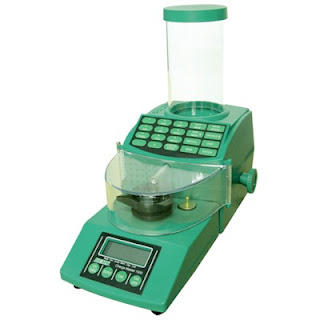 In the above image, we see a combination scale and dispenser made by RCBS. The user pours a large quantity of propellant into the transparent hopper on top and then enters the weight of the powder to be dispensed out. The dispenser automatically dispenses the correct amount to a precision of 0.1 grain. A device like this costs around $250 - $350 or so.


Electronic scales can not only measure powder weights, but also the completed cartridges, to make sure that they are within a consistent range of overall weight.


Finally, there are devices called powder tricklers, such as the one shown below: 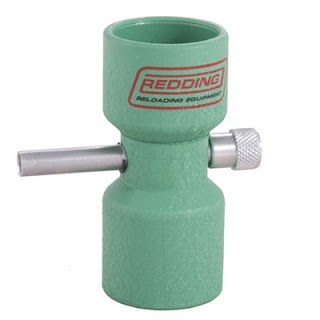 A powder trickler allows the reloader to dispense very small quantities of propellant (as in a few granules) at a time. This is often used by competition shooters and serious reloaders to produce consistent loads. People who use these devices initially load their cartridges below the desired weight and then add powder slowly using a powder trickler, until the desired weight of powder is reached. These are fairly cheap and cost between $10 and $15.

In addition to measuring the weights of the powder that is added to the cartridge cases, it is often necessary to measure the dimensions of cartridge cases. This ensures that the finished cases will work properly in the firearm and not get stuck inside. In order to check the dimensions of the ammunition, a reloader often uses a caliper or a screw gauge (also called a micrometer). 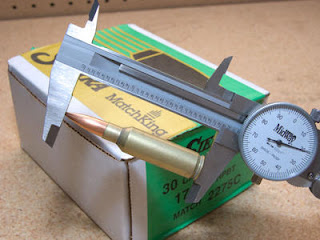 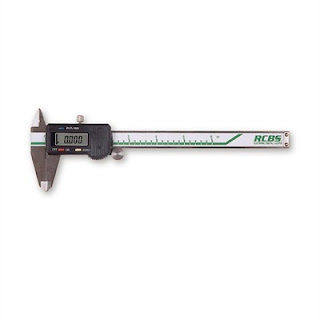 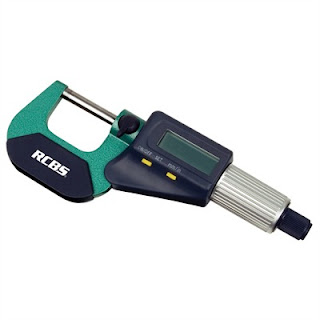 A selection of calipers and micrometers are shown above. These devices allow the user to measure dimensions of cartridges down to precisions of 0.001 inches (or 0.0025 mm.) or better. Prices of these vary depending on model from $25 for cheap models to $200+ for a very high-precision model. It is important to ensure that size of the ammunition is correct, otherwise the firearm may jam up during operation.