A die is simply a tool used along with a press and it is designed to cut or shape material, by pushing the metal object against the die surface. Dies are used a lot in manufacturing industries to make objects of a given shape. For the purposes of reloading, dies are generally sold in sets of two or three dies, though some sets come with four dies. Each set of dies is designed for certain calibers of ammunition only. 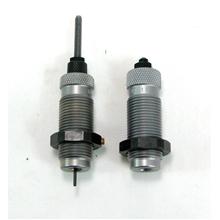 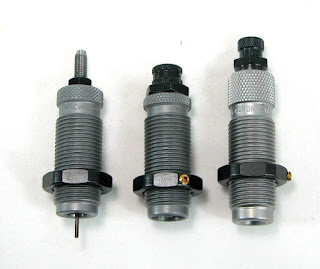 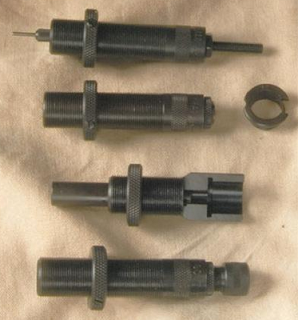 The number of dies in a set have to do with the shapes of the cases being reloaded. In general, a two die set is used for bottlenecked cartridge cases and three die sets are used for cylindrical (straight) cartridge cases. In the case of certain high powered cartridges like 357 magnum or 44 magnum, a four die set is sometimes used. The first die is used to resize the case back to proper size and also perform a decapping operation for many cartridge cases, though for some cartridge cases, the second die performs the decapping. In a two die set, the first die also expands the bottleneck of the case. In a three die set, the second die is usually the one that expands the neck of a straight case and in some cases, the second die also does the decapping operation. The last die in the set mates the bullet with the cartridge case and may crimp the bullet to the case. In case of four die sets, the fourth die may apply a stronger crimp to the bullet.

The purpose of the various dies are as follows:

Sizing dies: When a cartridge is fired inside a firearm, the brass cartridge case expands due to pressure and seals the chamber. As the bullet leaves the firearm, the pressure inside the chamber drops and the case springs back slightly, but it never goes back to the original dimensions that it had before it was fired. Thus, the used cartridge case may not fit a firearm correctly and will not grip a bullet correctly when reloaded. Hence, the user needs to use a sizing die to restore the cartridge case back to the dimensions that it had when it was manufactured in the factory. A lot of sizing dies also have a decapping pin to push out the spent primer from the case.

Neck-expanding die: These are used on straight cases (as the sizing die does this job as well for bottleneck cases) to expand the mouth of the case slightly, to help it receive the new bullet easily, without crumpling the edges when the bullet is seated inside the cartridge.

The dies are usually made of hardened tool steel or tungsten carbide and modern ones generally use a standard thread so that they can be used with all common brands of presses. For dies that are made of tool steel, the cartridge case needs to be lubricated before the resizing operation, due to the large amount of force involved in this. Rifle cartridges need every case to be lubricated, whereas handgun cartridges which are smaller and thinner, can be resized by alternating lubricated and unlubricated cases. Tungsten carbide cases are naturally slippery and don't need lubrication.

For people who like to make their own bullets, there are also dies called swaging dies.

These are used by enthusiasts to machine very precise bullet shapes.

There are other specialty dies as well. Bump dies are designed to move the shoulder of a bottleneck case back and are useful for people who own custom designed rifles which are machined to fine tolerances. Another type of die is the hand die, which has no threads and is designed to be hand operated

New die sets generally cost between $30 - $80 or so, depending on the type of material used to manufacture the dies. Some specialized die sets cost more than this, of course. Used die sets may be found for much cheaper prices in gun shows. The lifetime of a die is actually pretty long (some can last a generation or two), so purchasing used die sets may be advantageous for people who don't have much money.

In some situations, people also use shell holders along with dies. 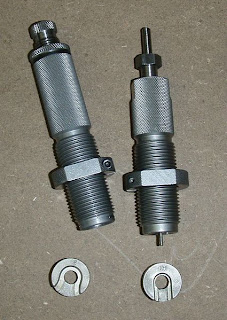 In the next post, we will look at more tools used for reloading.