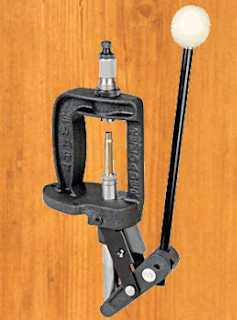 These are used to push the cartridge cases into the dies and use the principle of levers to apply the force required to do this. There are different models of presses, usually categorized by the letter of the alphabet that they are shaped like: "C", "O" (like the one pictured above) and "H" press types. They can also be categorized from the simple single stage models (like the one pictured above) to more complex progressive reloading models that can load multiple cartridges simultaneously and can switch dies automatically with each pull of the lever. 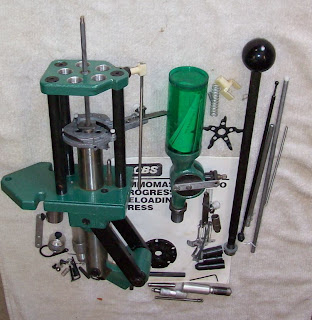 The most common types of press are the "O" and "C types, usually of the single stage models. When using a single stage model press, users generally reload cartridges in batches: i.e. they attach a die designed to decap a cartridge and then use the press to decap a bunch of cartridges one at a time first, then they switch dies to a type designed for loading and reload the same group of cartridges that have been decapped by the previous operation, one at a time. The "O" type is suitable for all stages of reloading cartridges as well as bullet swaging, whereas the "C" type is only suitable for all stages of reloading and cannot swage bullets.

Instead of a single stage model, the user may use a turret press model where the two or three dies needed for reloading are already mounted simultaneously on a turret and the user can switch between dies by rotating the turret. This saves the user the setup time required to take out one die and attach and re-position the next one when doing batches of cartridges. Older mechanically inclined readers may remember turret lathes, which use the same idea to load multiple tools on the lathe's tool post turret and switch between them using a lever.

Progressive presses like the one pictured above can handle several bullets at once, so the user can save more time by loading multiple bullets simultaneously. Progressive presses have multiple stations and hold a different die in each station. As the lever is pulled, a shell plate holding the different cartridge cases revolves under the various dies, so each case gets a different reloading operation performed to it in sequence. They can also have a device to automatically measure out the propellant and some even have devices to feed empty cases to the press with each pull of the lever. The user then needs to only hold the bullet on top the case and pull the lever.

A single "O" or "C" type press can be used to reload multiple calibers and shapes of ammunition, just by using the appropriate sized dies. The only exceptions are when large cartridges such as .50 BMG need to be reloaded, as these usually need specially designed presses to handle such larger cartridges and standard sized ones cannot do the job.

The "H" type is generally used for shotgun shell reloading, where each arm of the H configuration has a separate die to resize the shell, pack in the propellant, measure shot and push wads in and then crimp the shell. These are not as versatile as the "C" or "O" presses, because they can only be used to reload the one particular gauge of shotshell that they're designed for. The cost of re-configuring a "H" type press to reload a different gauge of shotshell (i.e. buying new dies, bushings, shot bar etc.) usually costs more than buying a new H type press for a different gauge, so most users simply buy a new press from the factory to reload a different shotgun caliber. Also, when using a "H" type press, users generally work on each stage of a cartridge reloading processes in sequence, instead of the batch mode operation done with "C" or "O" type presses.

In the next post, we will look at dies used for reloading.