When referring to firearms, we sometimes hear the term "point blank range". So what is the meaning of this term and how did it come about.

The popular usage of the term "point blank" usually means shooting a target very close to the muzzle of the firearm. However, in the field of ballistics, the definition is a bit different: "point blank range" is the range between which the user can hit a target without adjusting the elevation of the weapon. This varies depending on the size of the target and what range the firearm was zeroed at.

In our discussion about zeroing a sight many months ago, we mentioned that the sights are calibrated for a known distance (e.g. for the M16, the US military recommends zeroing the sights at 300 meters). Remember that bullets travel in a parabolic path, such as the diagram below:

There are multiple reasons given for the origin of the term "point blank". One reason given is that the traditional center of targets is a white circle and the French word for "white" is "blanc".

Another charming reason given for the origin of this name has to do with the famous Italian mathematician, engineer, designer of fortifications and bookkeeper, Niccolo Fontana, known to the world as "Tartaglia". The reason for his nickname has to do with an incident where he was badly wounded in the face by an invading French soldier when he was just a boy. The scars from those wounds affected his ability to speak normally and he picked up the nickname "Tartaglia" ("The Stammerer") as a result. As an adult in the 1500s, Tartaglia proved to be a skillful mathematician and was the first to translate Euclid's Elements from Latin into a popular European language (Italian), so it could be more readily understood by common people (only well educated people spoke Latin). During the 1530s, he started to develop an interest in military fortifications and gunnery. In 1537, he published a study on the science of gunnery and over the next 10 years, he invented an instrument known as a "Gunner's Quadrant" to help gunners aim their artillery properly. Incidentally, he was also the first to demonstrate the path of a bullet is always parabolic.

It consists of two wooden arms joined together at 90 degree angles to each other, similar to a carpenter's square tool. At the joint between the two arms is attached a thread with a weight at the end, called a "plumb bob". Between the two arms is an arc marked off into 12 divisions, called points. The cannon would then be fired at various angles of elevation and the ranges measured for each angle and noted down in a book called a "gunner's table". To use the device, the gunner would insert the long arm into the cannon barrel and then tilt the barrel up or down until the plumb bob would intersect the point that his gunner's table showed for the distance to the target. When the barrel was near vertical, the plumb bob would cross Point 12 and when it was near horizontal, the plumb bob would cross Point 0. 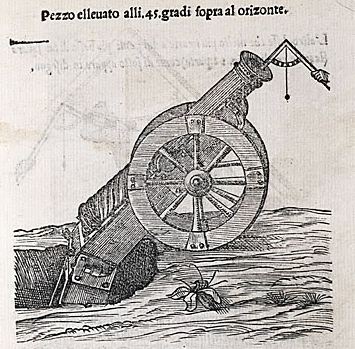 Using a gunner's quadrant with a cannon. Public domain image.

Remember though that this was 16th century Europe and most people were still using Roman numerals. Therefore the points on the arc were marked using Roman numerals I, II, III, IV .... XI, XII, since most people were used to seeing numbers written like this anyway. The concept of "zero" doesn't exist in the roman numbering system and therefore point 0 was marked with a blank and was called/translated as "Point Blank"!