A few months ago, we had discussed the amazing Soviet Space Pistol (TP-82), which was designed to be used as a survival weapon in remote areas. In today's post, we will look at a weapon that was designed in the US for a similar purpose. We are talking about the Armalite AR-7, known these days as the Henry Survival Rifle.

The Armalite AR-7 was designed in 1958 by Eugene Stoner, the same gentleman who designed the AR-15 and M-16 rifles. The AR-7 was based on the older AR-5 which was developed as a survival weapon designed to be used by aircraft personnel and carried in emergency kits stored aboard aircraft. The AR-5 was adopted by the US air force, but they only ordered very small numbers, therefore Armalite used some of the tooling that was originally developed for the AR-5 to create the AR-7 for the civilian market. The rifle was released to the civilian market in 1959. It was meant to be used by bush pilots, backpackers, hikers and amateur explorers.

As a bare-bones survival rifle, one of the primary requirements was for the design to be light and portable. Therefore, the AR-7 was made from plastics and aluminium alloys to reduce weight. The rifle was also designed to be compact so that it could fit inside a backpack. Therefore it was designed so that the parts could be disassembled and stored inside the plastic stock! 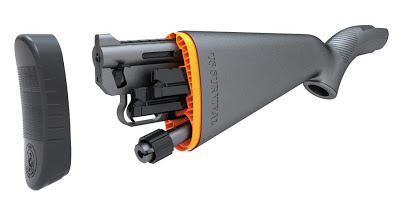 An AR-7 stored in a disassembled state. Click on image to enlarge.

When the rifle is stowed within its stock, the whole package can float on water! This rifle is designed to use the popular .22 LR cartridge, which is the most commonly available rifle cartridge in the world. It has a semi-automatic action and can hold 8 cartridges within its magazine. The entire rifle weighs 3.5 pounds (about 1.58 kg.) The rifle is also designed to be disassembled without any tools. The stock attaches to the receiver with a long screw bolt and the barrel screws on to the receiver, both of which can be manipulated using just a person's hands.The entire rifle can be assembled or disassembled in about 30 seconds. 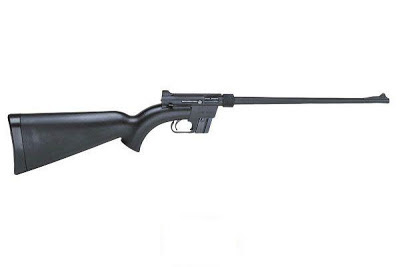 An assembled AR-7 rifle. Click on image to enlarge.

The rifle was designed for an 8 round magazine originally, but there are now other magazines for it that can hold 10, 15, 25 or 50 rounds as well. Accuracy is pretty decent and it can be used to hunt small game animals.

The version that is now made by Henry Arms has two 8-round magazines stored in the stock (latest versions have 3 magazines). The plastic stock is now made of ABS plastic which is tougher than the original plastic stock and does not crack easily. It is also much more water-resistant than the older stock. The receiver and barrel are coated with teflon for better corrosion resistance

An AR-7 was even featured in the James Bond movie To Russia With Love starring Sean Connery.