In our last post, we studied about a survival rifle that was designed for backpackers and hikers. Today, we will study an unusual firearm that was originally constructed in the jungles of the Philippines. We're talking about the Richardson R5 Philippine Guerilla Gun.

First, we will talk about an extraordinary gentleman named Iliff David Richardson, who was responsible for manufacturing and marketing this gun in the United States. Mr. Richardson originally enlisted in the US Navy as an ensign at the start of World War II and was stationed in the Philippines. His PT boat was one of the boats that was involved in the operation to evacuate General Douglas MacArthur out of the Philippines to Australia. He continued to serve on his PT boat until it was sunk by Japanese Navy float planes a month later. After this, he enlisted in the US Army and was involved in the fighting around Cebu city in the Philippines. He and a dozen other Americans attempted to escape in a native outrigger canoe to Australia, but the canoe sank in a storm and Mr. Richardson managed to reach the island of Mindanao after a long swim. There, he came into contact with Philippine resistance fighters and joined forces with them. Since he was a trained ham radio operator before the war, he was put in charge of setting up communications between the various resistance groups and allied forces in Australia and coordinating their efforts. He did this for about 3 years, until the US forces reoccupied the Philippines in late 1944. For his work in the war, General Douglas MacArthur made him a US Army Intelligence major and he had the unusual distinction of holding commissions in both the US Army and the US Navy simultaneously. His heroics came to the attention of the public towards the end of the war and Hollywood even made a movie, "American Guerilla in the Philippines", partly based on his adventures. 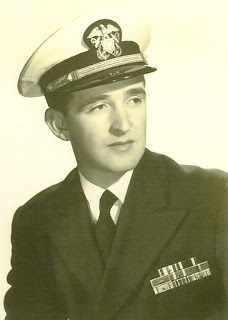 Iliff David Richardson in late 1944. Click on image to enlarge.

During his time with the Philippine guerillas, he noticed that they made simple firearms called Paliuntod and Paltik. These were one-shot weapons that were designed to be used to overcome an enemy soldier in a surprise attack and then take his weapon. In this, they were similar in purpose to the FP-45 Liberator pistol that we studied a couple of years ago. 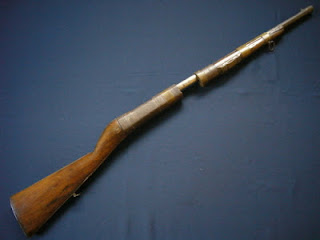 These weapons were originally invented and used by Filipino guerillas during the American occupation of the Philippines and continued to be used during World War II and can still be found in use currently. The shotgun above consists of a crude barrel made from a soft metal tube sliding over another tube. The user would push it forward (as shown in the image above) and load a cartridge into the back of it. The firing mechanism was extremely primitive as well. It consisted of a fixed firing pin, which was a nail that was fixed to the handle. To fire it, the user would simply slide the barrel back hard enough so that it slammed against the nail, which would detonate the cartridge and fire it. There was no rifling in the barrel and the weapon was only effective at short ranges and was mainly used to disable an enemy and take his firearm. Several guerillas who had fought with Richardson used these weapons against the Japanese.

After the war, Mr. Richardson came back to the US and found that he was regarded as a celebrity. He started a company called Richardson Industries in 1946 to manufacture the type of weapons that they used against the Japanese. He called his creation the Model R5 Philippine Guerilla gun. Compared to the guns used by the guerillas, the model R5 was made of comparatively better materials.

It consists of a simple wooden stock with a guide tube attached to it. At the back of the guide tube is a fixed firing pin. The barrel is a smaller diameter steel tube with no rifling, that can slide within the guide tube. The barrel is large enough to hold a 12-gauge shotgun shell. To load this firearm, the user slides the barrel out and inserts a shell into it. Then the user slides the barrel carefully back into the guide tube. To fire the gun, the user grabs the stock with one hand and the barrel with the other hand and strongly slides the barrel backwards to slam the cartridge against the fixed firing pin, which fires the gun. Note that the only thing that holds the breech closed is the strength of the user's two arms. There are no sights on this firearm and it is only meant to be used at close ranges. The little metal piece you see where the trigger should be is actually a safety device. It is simply a metal bolt that prevents the barrel from moving backwards far enough to strike the firing pin. A more advanced model of this rifle has a lever that looks like a trigger, but the mechanism actually controls a cam that prevents the barrel from sliding forwards or backwards until the trigger is pulled. The advanced model also has a grip attached to the barrel to make slamming the barrel back easier. The basic model has only 5 parts and the advanced model has 17 parts! The stock has the name of the manufacturer ("Richardson Industries Inc., East Haven, Conn., USA"), carved on one side and the words "Philippine Guerilla Gun, Patent Pending" carved on the other side (this message is visible in the image above). The stock is made of cheap wood and there is no butt plate.

Despite the fame of the creator, this gun never sold very well because it was very impractical to use and production stopped about one year later. The price of this gun, when it was first sold, was only $7, but it now sells as a collector's item for as much as $350-$400 today.