In the AK family of firearms, there are a huge number of different models. The Chinese type 56 rifle is one of these common variants. So how does a person tell that this is a Chinese made AK variant or some other model. This post aims to explain that.

First, many Chinese made AKs have markings in Chinese, so if a person is close enough to examine the markings, then this might be a good indication of where it was made. One place to look is near the fire selector lever, which selects the rifle's firing mode. 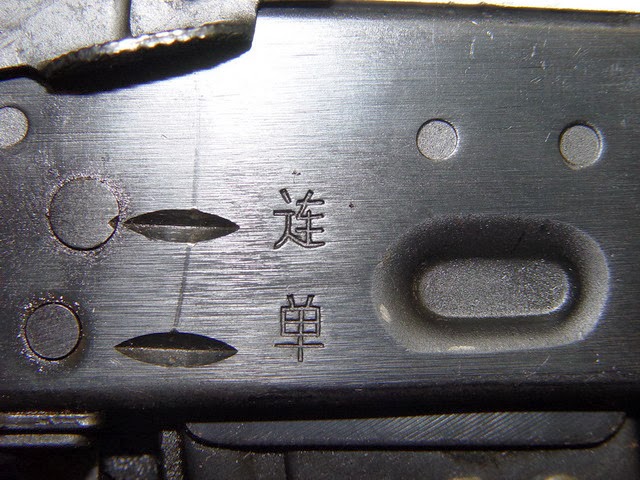 In some Chinese made AKs, the letters are transliterated into English as 'L' and 'D' instead (L for Lian and D for Dan) 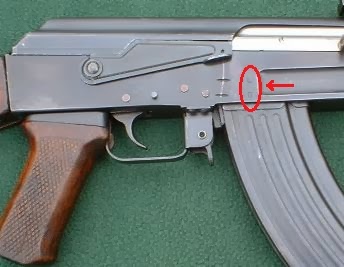 In the above image, you can see the letters 'L' and 'D' stamped in into the metal.

In some Chinese made AKs, there may be other markings in Chinese, or even say "Made in China" in English letters, especially in some imported models.

Even without getting close to the firearm, there are other ways to distinguish Chinese made AKs from a distance.

One of the distinctive features of Chinese AKs is that the front sight is a fully hooded type:

The front sight is inside a complete circle. This feature is distinct for Chinese made AKs and no other AK models have this type of sight (assuming that the original front sight hasn't been replaced, of course. It is possible for a non-Chinese AK to have a hooded sight if the owner decided to replace it. Conversely, the owner of a Chinese AK might have replaced the hooded sight with another one.) 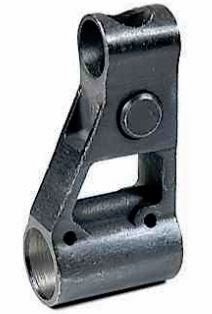 By the way, the rifle in the image above shows an earlier model type 56 and the receiver is milled, rather than being stamped. Note the deep horizontal groove in the receiver on top of the magazine. In later models of the type 56, the receiver was manufactured by using stampings and rivets, in order to speed up production. For example, we have:

As you can see, the hooded front sight is common to all these models. There is also one more common feature that is seen with later model type 56 variants. In all the above images, look at the three rivets in front of the magazine. For example:

As you can see in the image above, the three rivets form a triangular shape. You can see this triangular arrangement in most type-56 models, except some of the early models which had milled receivers. This is also something that is unique to Chinese made AKs only and rifles that are made elsewhere don't have this rivet pattern.