Is it a shotgun or a rifle? The Cape Gun

In our last post, we studied the Paradox gun, which could be used either as a shotgun, or as a rifle. The Paradox gun is one of the examples of a class of dual-purpose firearms. We will study another member of this family in today's post: the Cape Gun.

A cape gun is a long side-by-side double-barreled firearm, where one barrel is rifled and the other one is smooth. The user can use the rifled barrel to fire long range accurate shots against large game and use the smooth barrel to shoot shotgun shells at smaller animals. The gun has two triggers and allows the user to pull either one as needed. Cape guns were once very popular in South Africa, especially in the Eastern Cape province, but the guns themselves were mostly made in Europe. Cape guns made in Germany and Austria usually have the rifled barrel on the right side, whereas British made cape guns tend to have the rifled barrel on the left side. 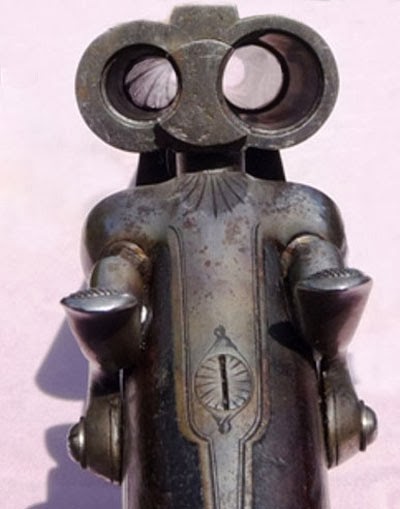 In the above image, we see a cape gun from the breech end. Note that the barrel on the left side has rifling visible and the barrel on the right side is smooth. This particular model is loaded from the breech, but there were many muzzle-loading models made as well. Hunters often used these in South Africa, where a wide variety of game could be expected. 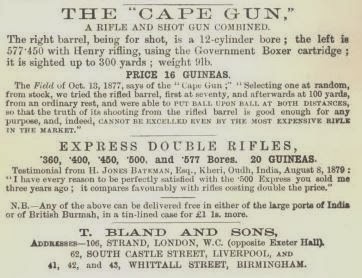 Vintage advertisement for a Cape Gun by T. Bland and Sons

The author W.W. Greener, in his book, The Gun and its Development, mentions that these guns were much esteemed by South African sportsmen and that it was useful in countries, where the kind of game that may be encountered cannot be determined beforehand. It was also found useful by poorer emigrants, who could not afford two different kinds of firearms. On the other hand, he mentions that it also has some drawbacks: A cape gun is pretty heavy compared to ordinary shotguns and the balance is also somewhat affected, making wing shots more difficult. As a rifle, it is light compared to ordinary rifles and has a larger recoil, when used with heavy-load cartridges. Therefore he recommends getting a separate rifle and a double-barreled shotgun instead, if it is practical to do so. It must be mentioned though, that Greener also manufactured combination guns and choke-bored rifles, which we will study in the near future.

Cape guns were made by a large number of manufacturers and are still found in auctions today. In the next post, we will study some more types of combined rifles and shotguns.