Is it a shotgun or a rifle? The Paradox gun

In the 19th century, the British Empire spanned a large portion of the globe. This was a time when rich English sportsmen would undertake expeditions to remote parts of the world to hunt exotic birds and animals. To hunt small targets that could be approached at closer ranges (e.g. birds, rabbits etc.), the best weapon that hunters could use were shotguns and to hunt larger furry animals that needed to be shot at longer ranges (e.g. deer, buffalo, tigers etc.), hunters would use rifles.

However, this meant that sportsmen would need to carry two different kinds of firearms for their expeditions: shotguns and rifles. Bear in mind that rapid reloading technologies were not yet fully developed at that time and the standard method of hunting in these expeditions was for the hunter to carry one loaded firearm and have a few assistants (called "gun bearers") standing next to him, each carrying another loaded firearm or two. After the hunter had fired his weapon, one assistant would exchange his loaded firearm with the hunter, so that the hunter could continue firing at targets, while the assistant reloaded the other firearm. Also, because there was a chance of parts breaking in the field, a hunter would typically pack several rifles and shotguns for an expedition, so that he would not have to return early, if one firearm broke.

Sportsmen of that era, expected to hunt both birds and animals on a long expedition and hence, they would pack both shotguns and rifles for their journeys. This made their baggage heavier, since these are two different firearm types. This was the situation until 1885, when a British colonel named George Vincent Fosbery, invented a firearm that could be used as both a shotgun and a rifle. His invention consisted of a large shotgun with a mostly smooth barrel, but the last few inches of the barrel near the muzzle were rifled with a special "ratchet" style. The famous British firearm manufacturer, Holland & Holland, immediately bought the patent rights for this firearm and began to market it as the Paradox gun in 1886.

Patent document from 1885 showing the design of the Paradox gun's special barrel.
Click on image to enlarge. Public domain image. 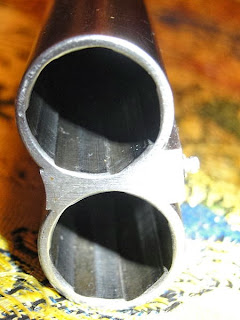 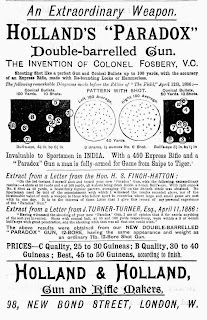 The word "paradox" means a statement that apparently contradicts itself. The reason that Holland & Holland chose to market this firearm with this name was because the defining nature of a shotgun of that era was its smooth barrel, but this was a shotgun with rifling in the barrel, hence it was a paradox!

The hunter could now carry one gun and two different types of cartridges and load the appropriate cartridge type, depending upon the target. Holland & Holland built about 1500 Paradox guns of various sizes between 1886 and 1930. They were built for a variety of bores: 8, 10, 12, 16 and 20 gauge.

While Holland & Holland owned the trademark "Paradox gun", they were not the only manufacturer of this type of dual-use firearm. Other British manufacturers made them for sale under their own names or for other companies to sell under their brand names (e.g.) Westley Richards and G & S Holloway. Westley Richards started manufacturing these guns in 1905 and sold them under the trademarks "Explora" (for larger bore 12-gauge gun models) and "Fauneta" (for smaller bore 20 and 28 gauge gun models). Some of G & S Holloway's products were resold in India by P. Orr & Sons, a high end jeweler and watch dealer in Madras (now Chennai), India, so their products are marked with both G&S Holloway and P. Orr markings. Some of these firearms occasionally show up in firearm auctions. P. Orr & Sons are still in business, although they have stopped selling firearms since around 1970 and only sell clocks and watches now. 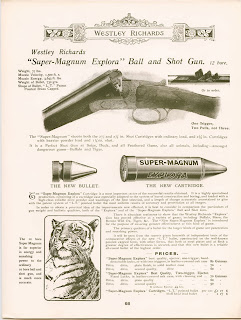 Vintage advertisement by Westley Richards for their Explora model gun. Click on image to enlarge

In 2006, Holland & Holland announced that they would start manufacturing Paradox guns again, after a break of over 70 years and they are currently selling new models.