In our last post, we looked at an early weapon that was capable of rapid reloading, the Kalthoff repeater. In today's post, we will look at another weapon's system from that era that attempted to solve the same problem, the Lorenzoni repeater.

As was mentioned in our previous post, the main issue with early firearms was that, after shooting a shot, the user would have to spend some time reloading the weapon, before he could fire again. Before the invention of technologies such as cartridges and breech-loading weapons, reloading was a process that took a minute or two. Since a firearm is useless unless it is loaded, gunsmiths were trying to reduce the reloading time as much as possible. One of these inventions was the Lorenzoni repeater.

The Lorenzoni repeating system was invented by a gunsmith named Michele Lorenzoni from Florence, Italy around 1660 or so. He used it for both muskets as well as pistols. 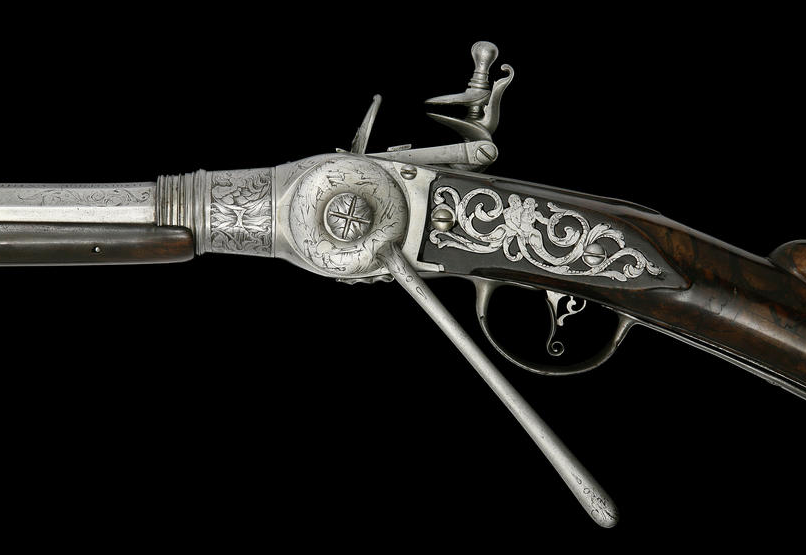 It consists of a firearm which has two magazines located above the trigger. The top one holds bullets and the bottom one holds the gunpowder. There is a long lever located on the left side, which can be used to move a revolving breech drum. The drum has two chambers within it.

To reload this firearm, the user points the gun downwards and rotates the long lever forward and back. On the forward motion, a measured amount of gunpowder and a single ball fall from their respective magazines into their separate chambers in the revolving breech drum. As the lever is pushed to its forward most point, it also cocks the flintlock and closes the frizzen cover. Then as the lever is pushed back, the ball and gunpowder that were loaded into the revolving breech chambers earlier, fall into the firearm breech. A little extra gunpowder falls into the firing pan and the gun is now ready to fire.

A pistol using the Lorenzoni system. Click on image to enlarge.

The revolving breech block is very precisely made, so that it seals off the powder magazine when the long lever is moved back into position. This is so that when the weapon is fired, the flame does not travel backward into the powder magazine and ignite it. A typical weapon of this type holds about 6-10 shots and it only takes a few seconds to reload between shots. Therefore, this weapon gave its user an immense advantage over other firearms of that era.

Here's a video demonstrating how the system works from the Forgotten Weapons blog:

As with the Kalthoff system, a firearm using this system needed very skilled machinists to manufacture and repair it. Therefore, this was not used for mass produced firearms. Also, because black powder burns dirty, powder fouling becomes a problem after a few shots. Firearms using this system were of high quality and usually purchased by wealthy people.

Michele Lorenzoni is known to have made a few of these weapons using this system, but they are very rare today. His family continued to make weapons using this system, well into the 18th century. His invention was also used by other people. It is recorded that an English gunmaker named Abraham Hill appropriated and patented the Lorenzoni system in London on 3rd March 1664. The very next day, the famous English diarist, naval administrator and member of parliament, Samuel Pepys, recorded in his diary that "There were several people by trying a new-fashion gun brought my Lord this morning, to shoot off often, one after another, without trouble or danger, very pretty".

The Lorenzoni system also saw use in America, in the form of the Cookson gun, which we will study in the next post.