It has been four years since this blog was first started and guess what? We haven't talked about magazines yet. In the next series of posts, we will discuss different types of magazines that are used in firearms.

With that said, let us discuss a couple of terms which many people get confused about: what is the difference between a clip and a magazine? Many people believe that they are the same thing and use the words interchangeably. However, they are incorrect and there are some major differences between the two.

A magazine is a device that is used to hold cartridges for feeding into a firearm's chamber, during the operation of the firearm. It may be of a fixed type or a detachable type and comes in a variety of shapes (box, tube, drum etc.).

A clip, on the other hand, is used to conveniently hold a bunch of cartridges, before inserting them into a magazine. They are generally used for quicker reloading of magazines. Depending on the type of clip, it may or may not remain inside the magazine during operation of the firearm.

A magazine also has some kind of feeding mechanism (usually powered by a spring), which is not present in a clip. A clip may sometimes have a spring too, but a clip's spring is not part of a feeding mechanism, it is just there to hold the cartridges in the clip.

For some reason, many people incorrectly refer to a detachable magazine as a clip, even though they are very different devices.

In this post, we will only look at a few types of clips and then study magazines in more details in the following posts. Remember, they are different devices!

A moon clip, such as the one shown in the image above, is usually used to quickly reload a revolver.

There is also another type called the en bloc clip, that was used by Mannlicher in 1885 and by some other rifles since. In this type of clip, the cartridges and the clip are inserted together into the fixed magazine of a rifle. When the last cartridge is chambered or fired, the clip is ejected out. 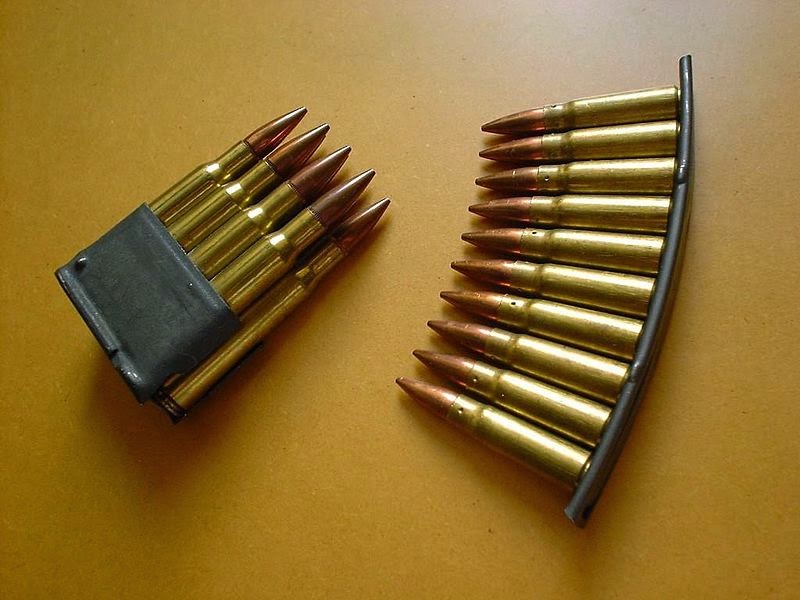 With that said about clips, we will study different types of magazines in the next few posts. Remember, clips and magazines are different devices!