In our last post, we studied the basics of magazines and also the difference between a magazine and a clip. In today's post, we will study a particular type of magazine, the tubular magazine.

Tubular magazines were among the very first types of magazines to be used in repeating weapons. It consists of a tube that can hold cartridges placed end-to-end. In many cases, there is a spring on one end of the tube, that serves to push the cartridges into the chamber. The tubular magazine is usually placed under the barrel, or in the butt-stock of the firearm. These are usually used with lever-action rifles or pump-action shotguns. Tubular magazines are also usually of the "fixed" type (i.e.) they cannot be detached from the firearm in normal usage. 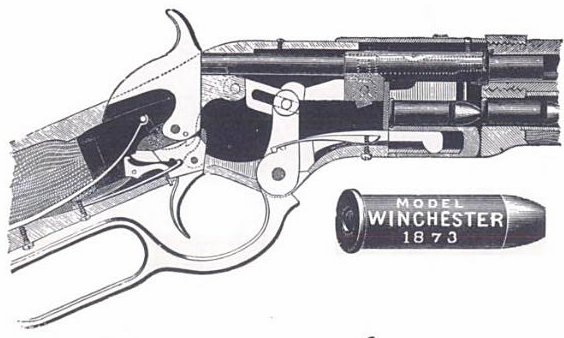 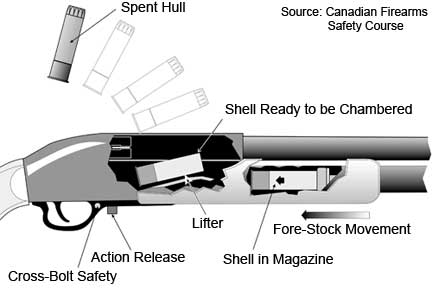 In the above image, we see a pump-action shotgun. You can clearly see the extra shells being stored in a tubular magazine under the barrel.

Not all tubular magazines are necessarily under the barrel though. Let us look at a very early repeating weapon, the Spencer carbine (and its larger cousin, the Spencer repeating rifle).

The Spencer rifle and carbine were invented in 1860 and preceded the Winchester model 1873 that we just studied above. Unlike the previous examples where the magazine is under the barrel, this weapon stores its cartridges in a magazine in the stock and there is a spring mechanism at the butt end of the stock that pushes the cartridges out of the magazine and into the chamber.

Not all tubular magazines were necessarily spring fed though. In very early repeating rifles such as the Kalthoff repeater and the Girardoni air rifle, both of which we studied a couple of months ago, gravity is used to feed a new bullet from the magazine. The user typically tilts the rifle upwards and manipulates a lever to load a firearm. Due to gravity, a bullet rolls down from the magazine and into the chamber. Of course, this mechanism was used before the invention of cartridges and also when bullets were round balls.

In some of the above images we've seen above, note that the cartridges have pointed bullets (a.k.a. spitzer bullets). If the cartridges are of the centerfire type, this means the pointed end of each bullet is resting against the primer cap of the cartridge ahead of it. In early repeating rifles, these sometimes caused problems because the pointed nose of one bullet could sometimes detonate the cartridge ahead of it, if enough force was applied. This could happen if the user were to accidentally drop the weapon, or even due to recoil after firing a cartridge. Sometimes, this could also result in a chain fire, where every bullet detonates the cartridge ahead of it. The risk of premature detonation increased as rifles got more and more powerful because of the increased recoil forces. Therefore, tubular magazine are generally seen these days on weapons that don't use pointed spitzer type bullets, but use other types of bullet shapes, such as shotgun shells (which have flat tips), round-nose bullets or rimfire cartridges (because the primer is in the rim, rather than in the center of the cartridge base). This is why they are usually seen today in shotguns and rimfire rifles mostly. They also don't generally have the capacity compared to some other magazine types (typically, they hold 3 to 12 cartridges). Another issue is that it is usually not possible for the user to see how many cartridges are left in the magazine. On the plus side, it is a very simple magazine mechanism and has been used for several decades.