In our last post, we studied tubular magazines. In today's post, we will study a type of magazine that is commonly seen in modern firearms, the box magazine.

There are two types of box magazine: the internal (or fixed) magazine and the detachable magazine.

Internal magazines are generally seen on bolt-action rifles and usually hold about 5 to 10 cartridges. They can be filled by hand, or more quickly by using clips, such as stripper clips or en-bloc clips to shove in multiple cartridges at a time. An internal magazine is not easily removable from the firearm.

A Lee-Enfield No. 1 Mark III rifle. Notice the internal magazine in front of the trigger. Click on the image to enlarge. Public domain image.

The above image shows a Lee-Enfield Mark III rifle. Note the internal magazine in front of the trigger. This rifle is loaded by opening the bolt on top of the rifle and pushing cartridges into the magazine. The magazine holds up to 10 cartridges. The cartridges can be fed in one at a time by hand, or by using a stripper clip containing 5 cartridges and pushing them into the magazine simultaneously. The video below shows how this is done. 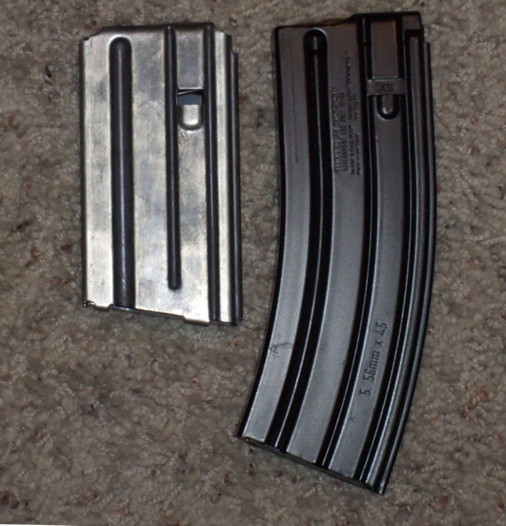 Two detachable box magazines. Left is a 20 round magazine made by Colt, right is a 30 round "High Reliablility" magazine made by Heckler & Koch.
Click on the image to enlarge.
Image licensed under GNU Free Documentation License v 1.2 or later, by user Raygun on wikipedia.

The video below shows how to interchange detachable magazines on a pistol.


The invention of the box magazine is generally credited to two Scottish born Canadian brothers, James Paris Lee and John Lee. In 1878, they invented a rifle, whose box magazine design was used by the Lee-Metford and later, the Lee-Enfield rifles. 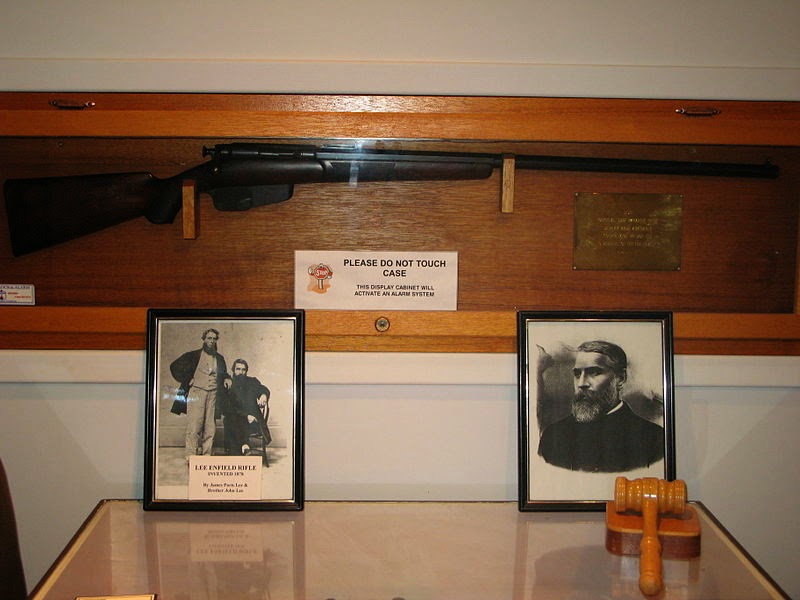 The above image shows the first Lee rifle prototype. The box magazine is visible under the stock, just ahead of the trigger guard. The magazine that this rifle uses is an internal magazine.

A single column (single stack) magazine. Click on the image to enlarge.
Image licensed under the Creative Commons Attribution 3.0 Unported License from Martin Meise at Wikipedia.

A double column (double stack) magazine. Click on the image to enlarge.
Image licensed under the Creative Commons Attribution 3.0 Unported License from Martin Meise at Wikipedia. 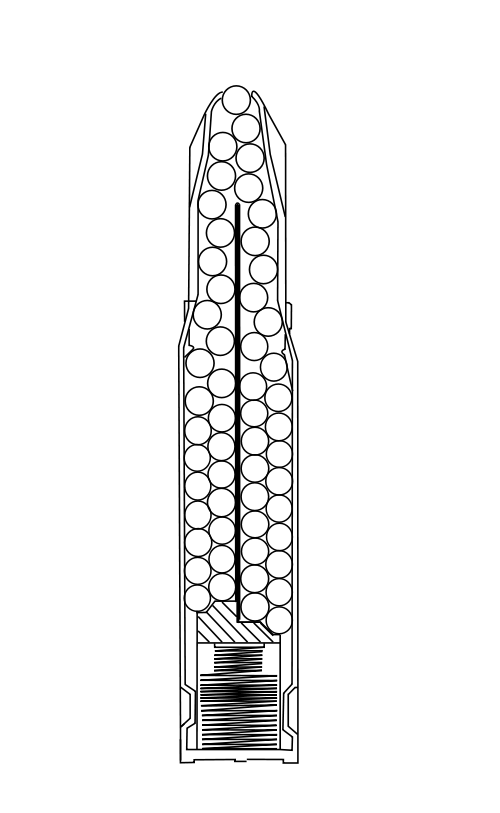 A quadruple stack (casket) magazine for a Spectre M4 submachine gun. Click on the image to enlarge.
Image licensed under the Creative Commons Attribution-Share Alike 2.0 License from Evers at Wikipedia

In the above illustrations, notice that each magazine has a spring and a follower piece at the bottom of each magazine. The spring and follower keep the cartridges pushed towards the top of the magazine, where they may be picked up by the firearm's action.

Box magazines can be made of either metal or plastic. In some firearms, the plastic magazines are made of a transparent material, which allows the user to easily see how many cartridges are left in the magazine. 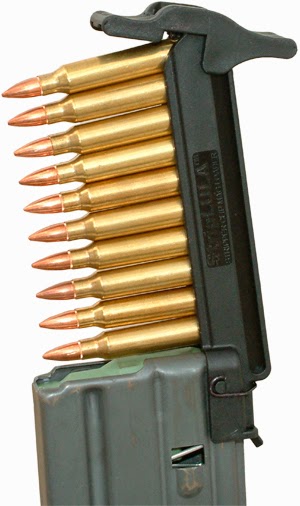 A bench loader and a strip loader for M16 magazines. Click on the images to enlarge.
Images are in the public domain.

People who use pistols may be familiar with a device called a "thumb saver", which is sometimes used to load magazines. Basically, a box magazine is usually pretty easy to load by hand, except for when the magazine is almost full. The last couple of cartridges are usually very hard to push in manually and thumb savers reduce the effort required to do this (and prevent sore fingers and thumbs!).

Box magazines have a number of advantages over tubular magazines:


Because of these numerous advantages, box magazines are the most common type of magazine used by modern pistols, submachine guns and rifles today.