There is really only one somewhat famous model of rifle that ever used the capsule magazine. However, this rifle was pretty influential and was adopted as the military rifle of three countries: Denmark, Norway and the United States of America. This rifle was the Krag-Jorgensen rifle.

The Krag-Jorgensen rifle was designed in 1886 by a Norwegian officer Ole Herman Johannes Krag and a Norwegian master gunsmith, Erik Jorgensen. Captain Krag had already had some experience in designing firearms at this point, as he had designed the Krag-Petersson rifle (with Swedish engineer Axel Petersson) in 1876, which was already used by the Norwegian navy. The earlier Krag-Petersson rifle, as well as the Jarmann rifle (used by Norway and Sweden) both used tubular magazines and Captain Krag was somewhat dissatisfied with the reliability of the tubular magazine. Therefore, he enlisted the help of a master gunsmith called Erik Jorgensen to design a new type of magazine for a new rifle. The result was the capsule magazine.

The interesting thing about this magazine is that unlike the tubular magazine, which is a straight tube that is generally positioned under the barrel, this magazine wraps around the action of the rifle. The cartridges in a capsule magazine are loaded parallel to each other, similar to a box magazine and unlike a tubular magazine. The following pictures will make it clear how the magazine works. 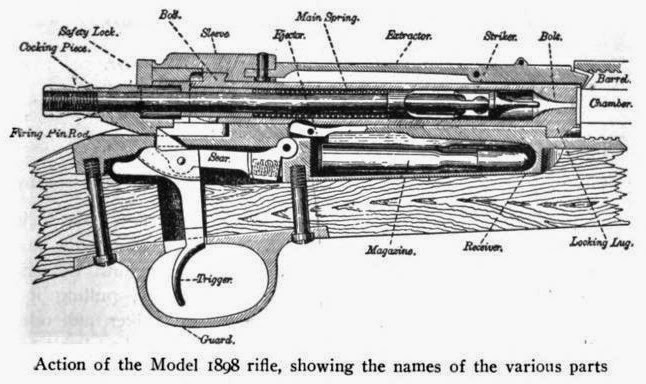 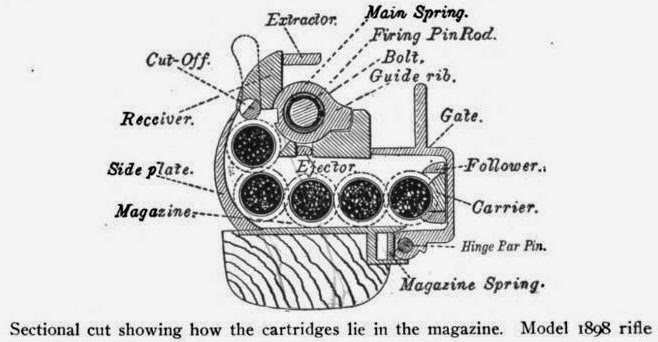 Side view and sectional view of the Krag Jorgensen rifle. Click on the images to enlarge.
Images are in the public domain.

In the above  images, we see two views of the rifle, a sideways view and a sectional view of the magazine. The second picture makes it clear how the cartridges wrap underneath the action and are loaded into the chamber.

There is an opening on the right side of the rifle, which is covered by a hinged door. Cartridges are pushed one at a time, through this opening and the spring and follower push the cartridges around and up into the action. A nice feature of this type of magazine is that it is easy to refill it, and unlike the internal box magazines we saw in the previous post, the user does not need to lock the bolt back to do this.

The original Krag-Jorgensen rifles were designed to hold 10 cartridges in the magazine. In 1886, the Danes held a trial for a new military rifle and an early Krag-Jorgensen rifle was submitted as an entry to the competition. The feedback of the Danish military revealed the need to lighten the rifle and therefore, the designers reduced the magazine capacity to 5 cartridges.

One more interesting feature of this rifle is that it has a magazine cut-off lever, which can be seen in the second picture. The reason for this lever is because of the military thinking of the day. Generals believed that if they gave soldiers the capacity to rapidly fire at long ranges, they would spend less time aiming carefully and would waste ammunition. However, if there was a need to charge at the enemy, or to defend against an enemy's charge, then a rapidly firing weapon was needed. This is why the cut-off lever was included. When the lever is flipped up, it blocks the cartridges in the magazine from being picked up by the bolt action. This means, the soldier has to open the bolt manually, load a single cartridge in the chamber, push the bolt back and use it as a single-shot weapon. When the cut-off lever is flipped down, it allows the bolt to pick up a new cartridge from the magazine upon closing the bolt. The military thinking was that soldiers could load the magazine up fully, but flip the cut-off lever up and use the rifle in single shot mode when firing at enemies at long distance, thereby conserving the ammunition stored in the magazine. If they needed to charge an enemy or defend against an enemy charge, they could flip the cut-off lever down and use the ammunition stored in the magazine for extra firepower. 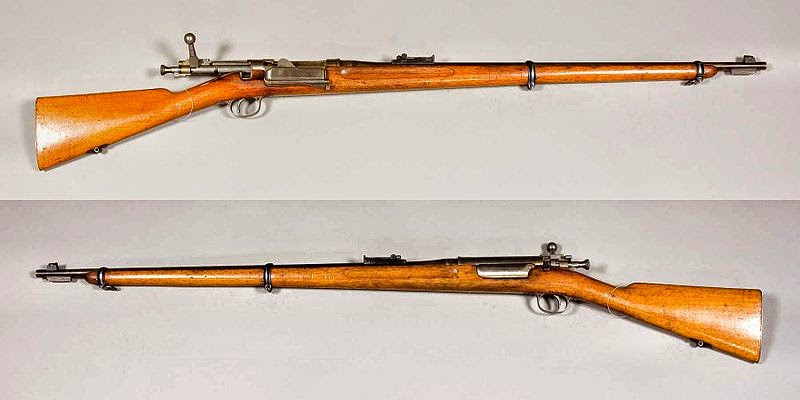 A Krag-Jorgensen Model 1892 rifle. Click on the image to enlarge. Public domain image.

The Krag-Jorgensen was selected by the US military in 1892 and served until 1903, when it was replaced by the Springfield M1903, which could handle more powerful ammunition and could be loaded faster via stripper clips. So far as your humble editor has heard, the Krag-Jorgensen was the sole user of the capsule magazine and no other firearm has used this unique type of magazine.

In the next few posts, we will study other types of magazines.