The first real MMG was the Browning designed M1919 medium machine gun. This is a weapon that fires .30 caliber rifle cartridges from an ammunition belt. It was designed as an air-cooled variant of the M1917 heavy machine gun. Unlike the M1917 which weighs 103 lb. (47 kg.), the M1919 only weighs 31 lbs. (14 kg.) The minimum number of people needed to operate it is two, but sometimes upto four people were involved: a gunner (who fired the gun and also carried the tripod and some ammunition, when moving the gun), an assistant gunner (who fed the ammunition and carried the gun, when on the move) and two other people to carry extra ammunition, barrels, tools etc. 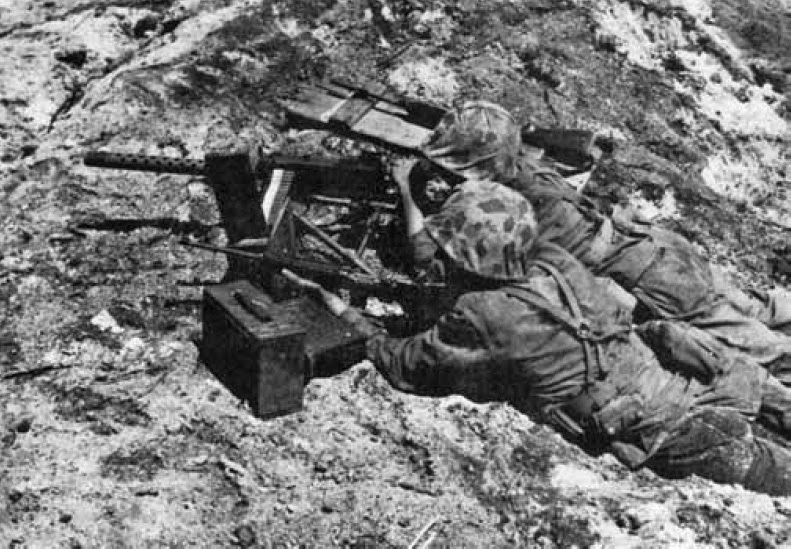 US Marines operating a M1919 A4 during World War II. Click on the image to enlarge. Public domain image.

This weapon was heavily used in World War II by different branches of the US military. It was used by infantry troops, mounted on jeeps, tanks, armored personnel carriers, aircraft etc. and continued to be used well into the Vietnam era. It was also used by other military forces around the world and modified to take other rifle cartridge calibers as well, such as .30-06, 7.62x51 NATO, .303 British, 7.62x54 mmR etc. In fact, it is still in use in some parts of the world.

In our next post, we will look at some more medium machine guns.