Metals Used in Firearms - I

Over the years, we've briefly discussed the properties of some of the metals used to construct a firearm (such as here and here). In today's post, we will revisit the topic of metals used in firearm construction in greater detail.

In today's post, we will skip over metals used from a bygone era (e.g.) brass, iron, bronze, gunmetal etc. and restrict ourselves to metals that are used in modern firearms. The main metals and alloys used are: steel, stainless steel and aluminum. Of course, there are different grades of these, such as AISI 4140, AISI 4150 etc. and we will study what all this means in today's post.

Briefly speaking, a metal used for gun barrels should be capable of handling large stresses, because it will experience large amounts of pressure (over 50,000 pounds per square inch or 340,000 kpa for metric speakers). It should be strong and elastic and ideally, it should be easy to machine and somewhat cheap. With that said, let's look at the first of the metal alloys: steel.

Steel is an alloy of iron mixed with other elements. The most important of these "other elements" is carbon. Pure iron is actually a soft metal and the addition of carbon allows the steel to be hardened much more than iron. However, an excess of carbon in the steel makes the steel brittle, so the quantity of it has to be carefully controlled. As we have studied previously, steel consists of crystals and it can exist with different crystalline structures. The shapes of these crystalline structures control the physical properties of the steel (such as hardness, elasticity, melting point etc.), The different crystal structures are sometimes called "phases" and there are several of these, such as ferritic phase, austenitic phase, martensitic phase, ledeburite phase, pearlite phase, cementite phase etc. 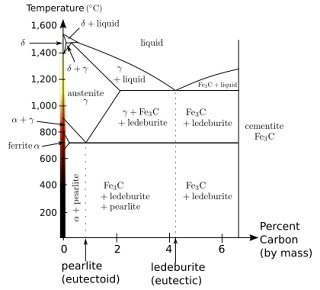 Steel can be switched from one phase to another, by heating, adding or removing other elements and controlling the cooling rate. The diagram above shows different steel phases and how it changes from one phase to another one, based on the temperature and carbon content. However, carbon isn't the only element added to iron to make steel, there are also other elements added, which also help to change the properties of steel. For instance, adding nickel and manganese makes steel more elastic, vanadium adds hardness, chromium adds hardness, increases melting temperature and adds corrosion resistance. Adding tungsten keeps the steel from forming cementite and forming martensite instead.  Sulfur, nitrogen and phosphorus make the steel more brittle, so these are removed during steel manufacture etc.

In America, the Society of Automotive Engineers (SAE) is responsible for maintaining standards for different grades of steel. Some of these specifications were originally developed by the American Iron and Steel Institute (AISI), but since SAE and AISI were often developing standards for the same materials, they decided to combine their efforts and AISI has turned over maintenance of standards to SAE since 1995. In other countries, there are similar organizations, such as the British Standards Institution (BSI), European Committee for Standardization (EN), Japanese Industrial Standards (JIS), German standards (DIN) etc.

Other countries have similar standards for steel grades. For instance, in Europe, the EN standard 42CrMo4 steel is about the same specifications as SAE 4140 steel, as are the British standard EN 19, Japanese standard SCM 440, German standard 42CrMo4 etc.

Now why did we mention 4140 and 4150 steels? That's because these are steel grades that are heavily used in the firearms industries to make barrels (they are also used to make gears, axles, connecting rods etc. by the automotive industry). These steels belong to the "chrome-molybdenum" or "chrome-moly" family. While these alloys do contain chromium, it is not as much as the chromium content found in stainless steel and therefore, they have less corrosion resistance compared to stainless steel. However, chrome-moly steels can be surface hardened, where the interior of the piece retains its properties, but the surface is hardened against wear and tear.

The standards for 4140 and 4150 grade steels has been around since about 1920 or so. As we noted a few paragraphs above, the difference between 4140 steel and 4150 steel is the carbon content (about 0.40% for 4140 steel and 0.50% for 4150 steel). So the difference between these two steel alloys is only that 4150 steel has approximately 0.1% more carbon. However, this extra 0.1% makes a big difference in the hardness, heat resistance and resistance to wear of 4150 steel, compared to 4140 steel. It also makes 4150 steel so much harder to machine and therefore increases the cost of manufacturing barrels.

The US military wants their barrels to last longer and work well under automatic fire, therefore they are willing to pay the extra costs associated with 4150 grade steel barrels. When you see barrels labelled "mil-spec", these are likely made of 4150 grade steel. That does not mean 4140 grade steel is bad -- in fact, it works well for civilian applications and does last for a long time as well, which is why you find so many manufacturers making barrels out of 4140 steel.

In the next few posts, we will study other metal alloys used in firearms.