A few posts ago, when we studied heavy machine guns, it was mentioned that one of the features of some of these machine guns is a jacket filled with water, which surrounds the barrel and helps to prevent it from overheating.

Of course, if several rounds were to be fired rapidly, the intense heat of the barrel would cause the water to turn into steam and evaporate, thereby reducing the cooling effectiveness of the jacket. In the early Maxim heavy machine guns, the users would simply unscrew a cap on the top of the water jacket and refill it with more water, whenever the water level in the jacket got low. 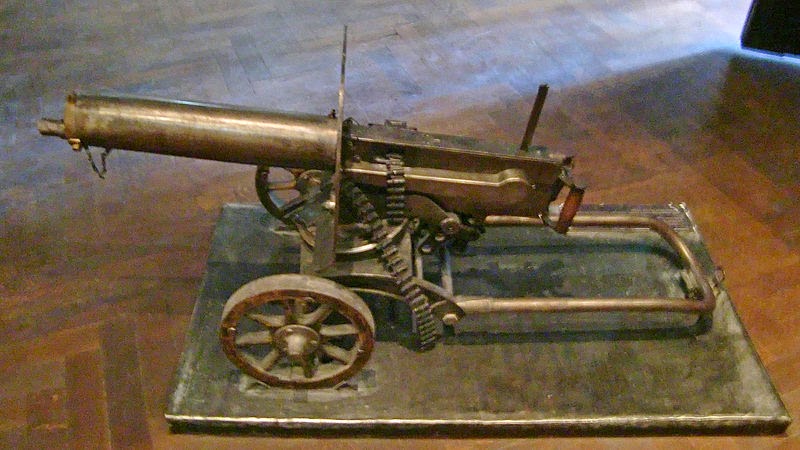 However, this presented a logistical problem to its users because then they needed to position the heavy machine gun next to a supply of water and this was not always possible in the battlefield. Resourceful users found that they could urinate into the water jacket in an emergency, but it is not possible to do that on demand, therefore it is preferable that a reliable supply of water be nearby. Another problem was that the steam rising from the barrel could also give away the position of the machine gun. This was a problem in trenches and rough terrain, since heavy machine guns cannot be moved as quickly by troops without a vehicle. Another issue was that if the steam was not allowed to escape out of the water jacket, the steam pressure inside could build up to the point of rupturing the jacket.

To counter these issues, newer models of heavy machine guns at the end of World War I were issued with steam chests. A steam chest, or more properly, a steam condensing chest, is simply a container that is placed below the barrel and is connected to the water jacket via a short pipe (or pipes). When steam is created by the hot barrel, instead of allowing the steam to escape out of the water jacket, it is transported through the pipe into the steam chest, where it condenses back into water. Periodically, this water is poured back into the water jacket for reuse. This system allows users to conserve their water supply for much longer and also prevents steam from rising and revealing their position to enemies. 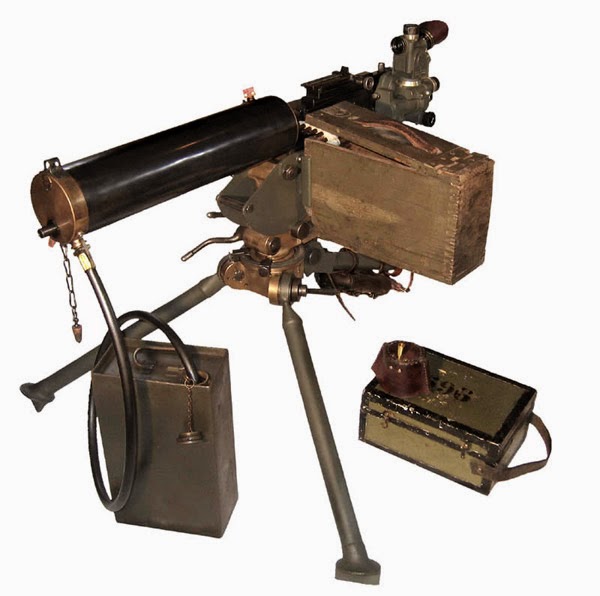 A Browing M1917A1 machine gun. Note the steam chest attached to the front of the water jacket.

In the above image, note that the can is a custom made device with its own folding carrying handle. However, any convenient container could be used as well, as the image below shows: 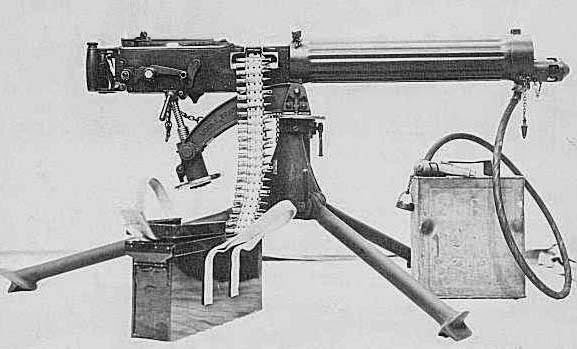 A British Vickers machine gun with its condensing chest. Click on the image to enlarge. Public domain image.

In the above example, we see a Vickers machine gun, as used by the British military. The steam chest on the right of the picture has some faint lettering on it, which may be discerned by clicking on the image to enlarge it. Still having trouble reading the letters?? The image below shows a closeup of the steam chest with the letters clearly visible: 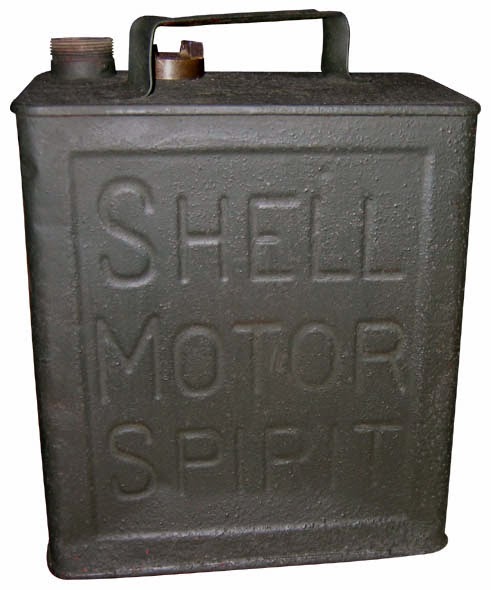 A can of Shell gasoline! Public domain image. Click on the image to enlarge.

Yes, that is a can originally meant to hold gasoline (or petrol, for non-American readers), made by Shell, the well known oil company. These cans were issued to British troops as standard equipment with Vickers machine guns, to be used as steam chests! 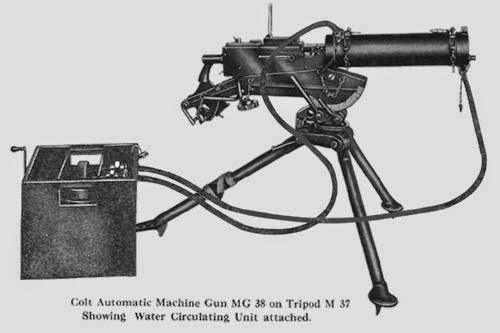 A Colt MG 38 machine gun. Click on the image to enlarge.

It must be noted that steam chest systems aren't air-tight, so a little steam does always escape out. However, they allow their crews to re-use their water for a lot longer.

Steam chests were supplied with most heavy machine gun models made in between World Wars I and II. As water-cooled heavy machine guns began to be phased out of military inventories and replaced with air-cooled models, the need for steam chests went away as well. With the invention of improved metallurgical techniques for making barrels last longer at higher temperatures, as well as the development of quick-change barrels, the extra weight of the water jacket, water and the steam chest were simply not worth the trouble for most users. That is why no modern machine guns use steam chests any more.