All About Scopes - I

Many months ago, we had studied about rifle scopes briefly, when studying different types of sights. In today's post, we will cover the subject in a bit more detail.

There are two types of telescopes available to shooters:
To understand more about these two types, let us first look at the main parts of a scope: 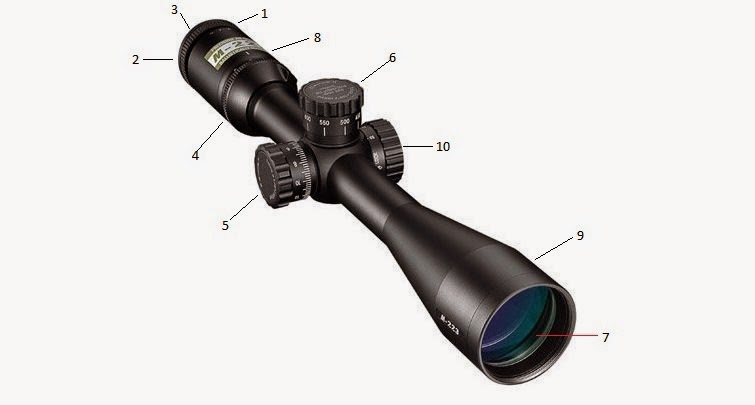 A scope made by Nikon.

In the above image, 1 is the eyepiece, which is the end of the scope that the user looks through. The eyepiece encloses a smaller lens, called the ocular lens (2), through which the user views the target. The eye piece generally has a focusing control at the end of the sight to obtain a sharp image of the target and the reticle.

The power ring (4) is a feature that is only found on variable power scopes. By turning the power ring, the user can change the magnification power of the scope. This feature is not found in a fixed power scope.

The objective lens (7) is the large lens which is further away from the user. This lens concentrates the light that goes through the scope. Larger lenses let more light in and in general, the larger the lens, the higher the magnification power of the scope. Typically, the diameter of the larger lens is measured in millimeters.

Variable power scopes of higher quality have a parallax compensation control (10). Basically, parallax is an optical effect caused by the objective lens not being coincident with the reticle. Therefore, putting the eye at different points behind the ocular lens makes the reticle crosshairs appear on different points on the target, which could cause aiming errors. The parallax compensation control allows the user to adjust for the parallax effect.

Some scopes (both fixed and variable types) also have a brightness control for the scope's reticle, so that the crosshairs can be seen in low light conditions. Some high-end scopes also have a feature called Ballistic Drop Compensation (BDC) which allows the user to adjust for the effect of gravity acting on a bullet (i.e. the amount the bullet drops as it travels a certain distance horizontally).

In addition to all these, we must also define a term which we used above: magnification. This is the ratio of the size of the image as viewed through the scope, compared to if it was viewed by the naked eye. For instance, if the magnification factor is 4x, this means an object appears 4 times larger in the scope than if the object was seen without it.

In the next post, we will study some more details about scopes.