All About Scopes - III

In our last couple of posts, we studied about different types of scopes and what they look like from the outside. In today's post, we will look at some of the stuff inside a scope. Specifically, we are going to study about a part called the reticle.

We actually dealt with reticles a little over four years ago, when we studied telescopic sights originally. A reticle is a device consisting of fine lines, which is embedded into a telescope and helps the user to line up a target precisely. The classic image of a telescopic sight is a target centered around two crosshairs, such as the image above. This is usually what is shown in movies and TV shows. However, there are many different types of reticles, which we will study. 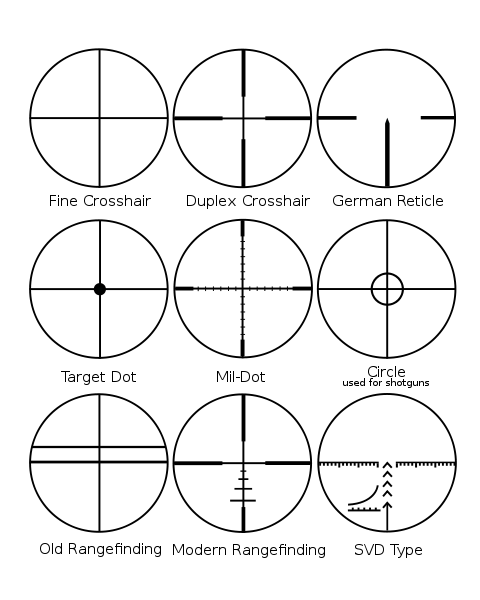 
Thanks to movies, most people are familiar with the Fine Crosshair type of reticle above. Fine crosshairs allow the user to see more of the target and do not block out much light. However, it is easier for the user to lose sight of the lines, especially in complex backgrounds. Thicker lines are more visible, but they block out more of the image and lose some precision. Therefore, modern telescopic sights use a mixture of both (i.e.) thicker lines on the outside and thinner lines closer to the middle. Examples of this would be the Duplex Crosshair, the Mil-Dot and the Modern Rangefinding reticle above. The thick lines allow the user to quickly figure out where the center of the reticle is and the thinner lines allow for precision aiming.

Back in the day, the crosshairs of reticles were made of  natural fibers, such as hair or spiderweb. Later on, they were made of thin wires (and many scopes still use wire crosshairs to this day, especially cheaper ones). The wires are mounted on the inside of the telescope tube. By flattening the wire in different places, the manufacturer can make Duplex Crosshairs or Target Dot type crosshairs. The nice thing about wire reticles is that they don't block out much light and are very durable.

Another technique to make the crosshair lines is to etch the lines onto a thin plate of glass, using a diamond cutter. The thin plate of glass is then mounted inside the scope. The etched lines allow for more complex crosshair shapes, including circles, lines that don't need to touch or have gaps in between. This allows them to have features such as estimating range and bullet drop (such as that seen in the Modern Rangefinding and the SVD type above). The etched lines block off a bit more light and the thin glass plate may reflect some of the light back instead of letting it through. Modern scopes usually coat the glass with special coatings designed to minimize the reflected light.

For aiming in low light conditions, many scopes have illuminated reticles. The illumination is usually provided by a few methods. The first is to use a bit of fiber optic cable to collect ambient light from the outside of the scope and deliver it inside to the reticle. Another technique is to use a battery powered LED to provide enough light to illuminate the reticle. While this method requires the user to carry a battery with the scope, it has the advantage that the user can usually adjust the brightness by turning a knob. The user may also be able to change the color of the backlight illumination, if the LED method is used. The third method, which is used in military scopes, such as the Trijicon ACOG, or the British SUSAT sight, is to use tritium, which is a mildly radioactive form of hydrogen, to provide illumination. The tritium slowly decays and emits light as it does so. The nice thing about this is that tritium glows for a long time and could last 11 years or more before the tritium tube needs to be replaced.

As you may have observed in movies, if the crosshairs are backlit, they are usually red, though some products use green or yellow. There is a good reason for this. Red happens to be the color that least interferes with the user's night vision.

We will study more about the advantages and disadvantage of FFP and SFP scopes, when we study the topic of scopes and rangefinding tomorrow.