All About Scopes - VII

In our last post, we looked at lenses used in a scope, as well as lens coatings. In today's post, we will study some more details about modern scopes.

One of the requirements of a good scope is that it must be usable in all weather conditions. In the early days of telescopic sights, moisture and dust particles would enter the body of the scope and deposit on the lenses from the inside, which causes distortion of the image. Many modern scopes are now made weatherproof or waterproof. There is a difference between the two terms: weatherproof scopes can withstand a bit of light rain, but cannot really be immersed in water, whereas waterproof scopes can generally be immersed completely in water for a little while and still work. Fully waterproof scopes are completely sealed using multiple neoprene rubber O-ring seals around the external facing lenses and the control knobs. This ensures that not only water is kept out, but so are dust particles and small debris as well.

Back in the early 1940s, one of the major problems of scopes was that the lenses would fog up, when exposed to rapid temperature changes, especially in humid areas. The fog or mist would settle on the lenses and make the scope unusable. This is one of the reasons that legendary Finnish sniper, Simo Häyhä, used his iron sights instead of his telescopic sight, during the Winter war between Finland and Russia. A scope can be affected by fog, even if it is completely sealed. This is because the air inside the scope may contain water vapor and oxygen, while it is is being sealed in the factory. The solution to this issue was first invented by Leupold in 1947. The story goes that Marcus Leupold, son of the company founder, Fred Leupold, was an avid hunter, and one day while deer hunting, he missed a big  Oregon Blacktail buck because his scope fogged up. He came back out of the woods swearing, "Hell, I can build a better scope than this!". Leupold's solution was to replace the air inside the barrel tube with a gas that has no moisture content and therefore, cannot form condensation on the lenses. The first fog-proof scopes made by Leupold were filled with nitrogen gas. These days, fog-proof scopes are usually filled with nitrogen, argon or a mixture of argon and krypton gases. The scopes are hermetically sealed to prevent the gases from leaking out. It must be noted that just because a scope is waterproof, doesn't imply that it is fog-proof, because the scope may have been completely sealed to make it watertight, but the air inside it could still contain water vapor. On the other hand, if a scope is fog-proof, it implies that it is waterproof as well, and the air inside it has been purged out and replaced with a dry gas containing no water vapor, before it was sealed. Quality scope manufacturers will often advertise that their scopes are "nitrogen purged", "argon purged" etc. What this means is that the air inside the scope has been replaced by nitrogen or argon.

One more thing to note about fog-proof scopes is that only the interior lenses in the sealed scope body will not fog up. It is still possible for condensation to form on the surfaces of the two outside lenses, because these are exposed to the atmosphere.

It must be noted that before good seals were invented for scopes, mold and fungus could also form on the inside lenses of a scope. Now, with the scopes being hermetically sealed and filled with a gas that does not support life, this does not happen any more. 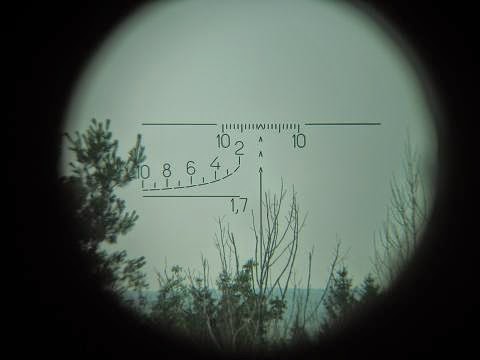 View from a Romanian-made PSO-1 scope, originally invented by the Soviet Union

The above image shows the view from a Romanian PSO-1 scope, which was originally designed by the Soviet military for the SVD rifle. The PSO-1 is completely sealed and filled with nitrogen gas to prevent fogging, and it can reliably function with temperature ranges of -50 C to 50 C (-58 F to 122 F)

The outside of the scope body also needs to be tough, but light. Back in the day, when the first scopes were developed in the 1830s and 1840s, they used to be made out of brass, due to its resistance to corrosion. In 1855, William Malcolm opened a factory to make rifle scopes in Syracuse, New York. His scopes were among the first to use a seamless steel tube for the body of the scope. While steel is a much more durable material than brass, it is also much heavier. During the 1940s, due to inventions made by the aviation industry, aluminum alloys were developed and the prices of aluminum dropped as well. Many modern scopes today have bodies made of aluminum alloy. An aluminum body is also pretty durable, but it is much lighter than steel. In order to resist corrosion, most aluminum bodies are anodized or hard anodized. High quality scope manufacturers use 6000 series grade of aluminum, which are generally referred to as "aircraft aluminum alloys", because these are heavily used by the aviation industry. Examples of these aluminum alloy grades are 6061-T6 and 6061-T651, and if a high end manufacturer is using these, they will let you know in the advertising, because these grades of alloy are much more expensive than ordinary aluminum alloys.

In our next article, we will discuss parallax error and how to work around it.