All About Scopes - V

In our last few posts, we studied telescopic sights from the outside and in our previous post, we studied one part that is inside the scope, namely, the reticle. We also talked about terms like First Focal Plane (FFP) and Second Focal Plane (SFP) in our previous post. In today's post, we will look into the parts of a telescopic sight in more detail and find out what FFP and SFP really mean.

Before we dive into a telescopic sight, let us first study lenses, in particular, a type of lens called the biconvex lens (also sometimes called a converging lens). A biconvex lens is thicker in the middle and thinner at the edges. It is typically made of a transparent material, such as glass. Since glass has a greater density than air, light bends as it passes through it (you can observe the same effect if you look into a pool of water, as objects at the bottom of the pool appear to be at a different location than where they really are, due to the light rays bending as they enter it.) In a lens of this type, when light from a great distance passes through it, the light is concentrated to a spot on the other side of the lens, called the focal point, as shown in the diagram below: 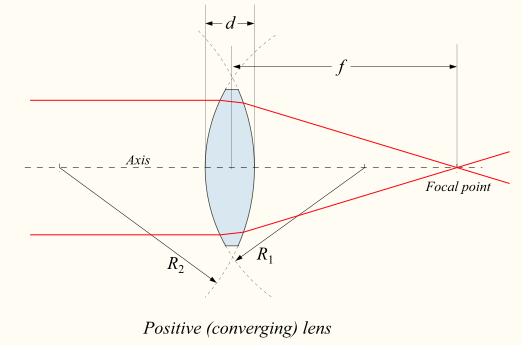 The distance between the center of the lens and the focal point is called the focal length of the lens (marked as 'f' in the figure above). Before you start yawning after reading this material, you may actually be familiar with the concept of focal length, but not realize it. As children, many of us have used a magnifying glass to burn holes into a sheet of paper (admit it, you did it too). The trick is to move the lens up and down to adjust the focus, until a tiny concentrated image of the sun appears on the sheet of paper. When the paper starts to burn, the distance between the lens and the sheet of paper is the focal length of the lens.

Now let us consider an object as viewed through a lens, as shown in the image below:

The main thing to notice in the above diagram is that the image is upside down because of the way that the lens bends the light reflecting from the object. As you can imagine, this is not very useful for telescopic sights because people aren't used to seeing things upside-down. We will study how this is rectified later.

The above image shows how light passes through two lenses. The lens on the left is the larger objective lens, which has a longer focal length, and the lens on the right is the eyepiece lens (otherwise called the ocular lens). We encountered these terms a few posts ago, when we studied the external parts of a scope.

As you can see from the images above, the two lenses collect more light than a human eye can by itself, and give the user a brighter magnified image. Note that because of the way that the light bends, the image that the user sees is upside-down. The fact that the image appears upside-down doesn't matter when viewing symmetrical objects such as stars, the planets, the moon etc. However, it does definitely matter when viewing targets on the earth, as users prefer to see their targets aligned in the proper direction.

Therefore, scopes work around this issue by having another set of lenses in between the objective lens and the ocular lens. These intermediate lenses also flip the image, therefore when it comes out of the ocular lens, the double inversion causes the image to be turned back to the correct direction, the way that most users like to see it. The image below shows how this works:

Internals of a telescopic sight. Click on the image to enlarge.

Light passes through the objective lens and the image is inverted, as we have already seen a few paragraphs above. It then passes through another set of lenses, labelled as the picture reversal assembly (also called "erector lenses") in the image above. These lenses serve to invert the image again, which means by the time it passes through the ocular lens, the image is flipped back to the correct direction. In variable power scopes, there is a mechanism to allow the erector lenses to be moved back and forth, which changes the magnification power of the scope.

We will study more about the internal parts of a scope in the next post.