Here's wishing the readers of this blog a very happy and successful 2016. In today's post, we will study a particular type of snub-nosed revolver in history, with some very interesting and unusual features. We will study the FitzGerald Special, otherwise known as "Fitz Special", "Fitz Colt", "Fitz" etc. 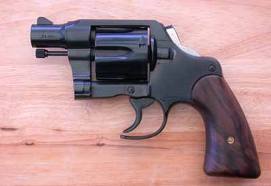 The first thing that the reader will no doubt notice, is that part of the trigger guard is missing. This was actually deemed "a feature" by its creator, who we will study about first. 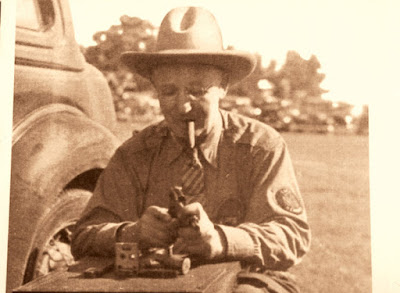 John Henry Fitzgerald was born in 1870 in Manchester, New Hampshire. As a teenager, he developed a passion for firearms and became very good with revolvers and pistols. He grew up to become a large man with big hands (which we will see the importance of, soon enough) and joined the New York Police Department (NYPD) as a street cop. During this time, he also participated in several shooting competitions and became well known as a champion shooter.

In 1918, he retired from the NYPD and was promptly hired by Colt, because of his fame as a shooter. During his first few years at Colt, Fitzgerald worked to test new handgun models that were being developed by Colt. Because of his reputation, Colt also used him for marketing their handguns. They regularly sent him around the country to give shooting exhibitions using Colt products. As part of his job, he also gave training lessons and demonstrations to various police departments around the US.

Fitzgerald's work with police departments made him start thinking about concealed snubnose revolvers, which were much needed by plainclothes policemen and detectives. At that time, most of Colt's revolvers were models with longer barrels, frames and grips. While these models were good for accuracy in competitions, their large weights and sizes made them less suitable for defensive situations. In the 1920s, he began working with existing Colt revolvers such as the New Service, Police Positive and Police Positive Special models, modifying them to be more easily concealed. In 1926, he revealed his first prototypes.

There were some good reasons for all these modifications. First, he reasoned that a shorter barrel would make the revolver easier to conceal and also pull out more quickly out of a pocket or holster. Also, since most police shootouts happened at relatively short ranges, he determined that a 2-inch barrel gave sufficient accuracy for most of these situations.Also, a short barrel could be used more easily in confined spaces, such as from the inside of an automobile. Finally, he thought the short barrel would actually increase the reliability of the weapon. His idea was that while the ammunition quality at that time was quite unreliable, it would be impossible for a bullet to get stuck in such a short barrel!

The front sight was also reduced in height, because he determined that short-range gunfights didn't need taller sights. Also, rounding off the corners of the front sight, filing down the hammer spur and rounding the grip made the revolver less likely to snag on clothing, when drawing out the revolver. Removing the hammer spur also made the revolver's primary use as a double action model, which is faster than firing in single action mode, a benefit for defensive shooting. However, for people that wished to use the revolver in single-action mode, he serrated the top of the hammer instead, so they could still use it as a single action revolver if needed.

Finally, the most controversial feature: the removing of the front part of the trigger guard. It must be remembered that Fitzgerald was a street cop earlier in his career and he had walked several winters in New York in the snow. He knew from experience, that it was hard for a man with big hands and wearing gloves, to be able to pull a trigger easily under these conditions. Therefore, he removed the front half of the trigger guard, so that the trigger would be much more accessible. Some accounts say that this modification also made it possible to fire the revolver from the inside of a pocket if needed. As it happened, Colt used to stamp their proof mark on the left side of the trigger guard, so sawing off the guard removed this marking. Therefore, genuine Fitz specials generally had the proof mark restamped elsewhere: usually on the frame behind the serial number under the cylinder crane, or on the rear of the trigger guard.

In 1927, Colt introduced their Colt Detective Special model, which was a snub-nosed version of the Colt Police Positive Special revolver. It rapidly became popular with police departments and became easier for Fitzgerald to modify, as it already came with a short barrel by default. 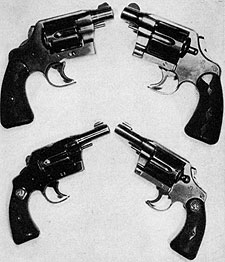 The Fitzgerald Special models were very custom guns modified by Fitzgerald himself and carried by some very famous people. For instance, Colonel Rex Applegate, who worked for the OSS (a precusor to the CIA during World War II) carried one, as did Charles Lindbergh. Notorious bank robber Clyde Barrow (of Bonnie and Clyde fame) also carried one, which was believed to have been stolen from a police officer, and was recovered when he was killed by the police. Fitzgerald allegedly also modified a few M1911 pistols as well, two of which were gold-engraved models carried by legendary Texas Ranger, Manuel T. "Lone Wolf" Gonzaullas, which are now on display at the Texas Ranger Museum in Waco.

Fitzgerald himself only modified about 100 revolvers or so, and since every one of them was customized, they are very rare these days and worth quite a bit of money. Part of the reason for the high prices have to do with the fame of their creator, as Fitzgerald was a well recognized authority on firearms and was an in-demand instructor for defensive shooting tactics. In 1930, Fitzgerald even wrote a book called Shooting, where he discussed various handgun shooting techniques and tactics. A genuine Fitzgerald modified revolver can easily be worth about $10,000 at auctions today and double that, if its previous owner was also a famous personality.

However, other people made the same modifications themselves and there are many fakes out there. In fact, the practice of sawing off the front part of the trigger guard is called "Fitzing" and a weapon thus modified is referred to as being "Fitz'd". For many decades now, amateur gunsmiths have been making this particular modification in their home workshops. Not only have Colt revolvers been "Fitz'd", so have models from other companies such as Smith & Wesson, and other weapon types such as pistols and rifles.

It must be remembered that while Fitzgerald himself was an expert shooter, removing the front part of the trigger guard makes it easier to accidentally pull the trigger, therefore extra special care must be taken while handling one. Also, a genuine Fitz Special often had the trigger pull lightened as well, so a much smaller force is required to discharge it.

For safety reasons, large firearm manufacturers don't offer handguns with part of the trigger guard removed. However, the rest of Fitzgerald's innovative modifications (short barrel, shorter grip, bobbed hammer etc.) are still being offered as standard on production revolvers made by different companies.