Effectiveness of Old Firearms - I

When this blog first started, we talked about the accuracy (or rather, inaccuracy) of old firearms, especially those of the muzzle-loading variety. Back in the day, military commanders would line up their troops and tell them to shoot at the enemy at close range, with the hope that at least some of the shots would hit their enemies. However, trials on weapons of the day showed they seemed to be more accurate during controlled tests, but not so accurate under battlefield conditions. So what is the cause of this inaccuracy, when used in the field?? Was it because of the limitations of the weapons technologies? Was is because of the training of the soldiers? We will study the causes in the next couple of posts.

For the purposes of today's discussion, we will consider two early firearm types today: the arquebus and the musket. These were generally muzzle-loading weapons using matchlock technologies. 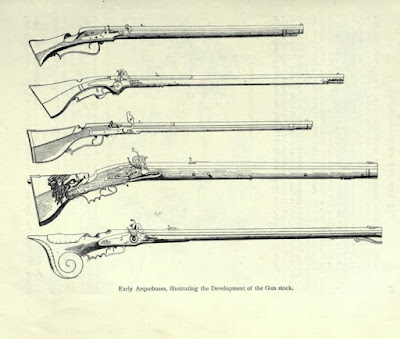 The arquebus is one of the oldest types of firearm used in Europe. The first use of arquebuses in large numbers was in Hungary in the late 1400s by King Matthias Corvinus. The idea spread westwards, and soon, Italian troops and then, Spanish and Portuguese troops started using arquebuses in the early 1500s, followed by the French around 1560. Typically, the weapon weighed about 5 kg. (11 pounds) and fired a ball about 12 - 20 mm.  (about 0.5-0.75 inches) diameter.

The musket was simply a larger version of the arquebus, with a longer and heavier barrel. Since the barrel was heavier, a typical musketeer would also carry a couple of sticks to rest the end of the barrel on. A musket also has more recoil than an arquebus, therefore its user needed to be correspondingly stronger to withstand this recoil. Specialized troops, such as the Turkish Janissaries, Russian Streltsy and the French Musketeers, were formed to use this weapon. These soldiers were paid more than ordinary soldiers.

We will also consider early handguns in our study today.

During 1988 to 1989, staff members of Steiermärkisches Landeszeughaus (Steyr Provincial Armory)  in Graz, Austria, conducted tests using 16 firearms dating from 1571 to post-1750, with equal numbers of specimens from the 16th, 17th and 18th centuries. The guns were mostly mass-produced specimens, such as might be typically issued to infantry troops. Three of the weapons had rifling, the others were smoothbore guns. A couple of the guns were rejected after early inspection revealed that they had potentially dangerous weaknesses in the metal. The remaining 14 weapons were test fired 325 times under controlled conditions, in a testing range operated by the Austrian Army.

The results were summarized in a paper by Dr. Peter Krenn (Steiermärkisches Landeszeughaus) , Colonel Paul Kalaus (Austrian Army), and Dr. Bert Hall (University of Toronto), in a paper titled "Material Culture and Military History: Test-Firing Early Modern Small Arms". Dr. Krenn and Col. Kalaus conducted the firing tests and did the original study and Professor Hall edited and translated their work and added his own conclusions to the end of the paper.

The guns were mounted on rigid frames (to absorb recoil consistently), sighted on to the target, fired using electrical means (bypassing their original firing mechanisms) and velocities measured carefully using modern electronic chronographs. Modern black powder ("Koln-Rottweil Number 0" grain 0.3-0.6 mm.) was used for these tests. The exact weight of powder charge was determined to be approximately one-third of the ball weight, but this varied from piece to piece, so they determined the optimum charge of each one experimentally and reported results with that charge. As part of the tests, they also brought two modern production assault rifles and a modern pistol used by the Austrian military, so that they could compare the results against modern firearms. The modern firearms used for this test were:


Targets were shot at distances of 30 meters (about 100 feet) for pistols and 100 meters (330 feet) for the muskets, arquebuses and rifles. Target size was 167 cm. tall and 30 cm. wide (about 5 feet 6 inches tall and 1 foot wide), basically the frontal area of an average standing human soldier. Accuracy tests were done by measuring the scatter pattern of the bullet holes in paper targets. For penetration testing, the targets were generally made of spruce or mild steel, and additional penetration tests were also done to blocks of soap, gelatine, modern steel plate and 16th century armor plate.

The ancient pistols fared much better in the tests: they were much more accurate at 30 meters, scoring hits with 85% and 99% probability (by comparison, the modern Glock pistol scored at 99.5%). Of course, bear in mind that these tests were done at 30 meters, rather than 100 meters, so the accuracy of older weapons seems to depend on the distance to the target.

It is interesting to note that these tests show that the accuracy of these firearms did not significantly improve between the 16th to the 18th centuries. Note that human error was completely eliminated in these tests, as the guns were all fitted to rigid frames and sighted into the target and the ignition was done by electrical means. Also, the gunpowder used for testing was made with modern methods, so it was much more stable and consistent than the gunpowder used in the 16th to 18th centuries. So what was the cause of this inaccuracy over longer distances then? Well, one of the primary causes is the Magnus effect, named after Gustav Magnus, a German physicist who studied it in 1852.

The Magnus effect, on a backspinning ball in an airstream. Image licensed under Creative Commons Attribution-Share Alike 3.0 Unported license

The Magnus effect causes the round spinning sphere to experience an aerodynamic lift, which changes the direction of travel of the sphere. Anyone who has watched or played ball sports such as tennis, golf, baseball, paintball etc. has observed this effect. For instance, any time a tennis player or golfer hooks or slices a shot, the ball will start curving in some direction. Baseball pitchers use this same effect to throw curve balls. The effect becomes more apparent, the further the sphere moves.

For a smoothbore weapon, nothing can be done to eliminate the Magnus effect. Other features in the gun can make it more inaccurate, but even the best quality smoothbore weapon cannot overcome this fundamental problem. The inherent ballistic qualities of such smoothbore weapons meant that they were only effective when used in mass formations and at close ranges.