In our previous discussion that covered some early portable firearms, we've seen how the early firearms were used by soldiers. To recap, they would hold the weapon with both arms and try to manipulate a lit rope (a slow match) with the tips of their fingers towards a touch hole on the side of the barrel, while still holding the weapon with their hands. Needless to say, the technique was extremely cumbersome and prone to inaccuracy. Hence, one of the first major developments in small arms history was the invention of the matchlock.

As far as firing mechanisms go, the idea of using a trigger to activate a weapon was not a new invention, as they had been used by crossbows in centuries before. So it was only logical that the idea would be borrowed for firearms as well. 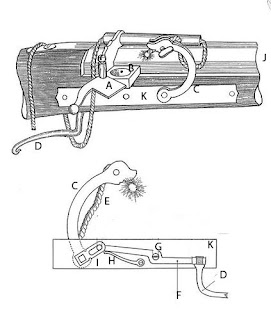 Part List:
The soldier would load the barrel with gunpowder and a bullet. Then, they would pour a little extra powder into a flash pan (part B in the picture). The flash pan has a tiny touch hole leading into the main gunpowder charge inside the barrel. Many rifles featured a cover on top of the flash pan, so that they could keep the powder in the flash pan safe from the elements, until the moment of use. A slow match (E) would be attached to a curved lever called a Serpentine or a Cock (because it resembled a rooster's head in some early weapons). You can see the serpentine labelled as C in the above figure. The trigger D is connected to a sear lever F, which is connected to a tumbler link I. When the trigger is pulled, the serpentine C is pulled towards the flash pan B and lights the gunpowder charge in the flash pan. This in turn burns through the touch hole and ignites the main charge inside the barrel. A flat spring H is used to return the sear lever back to its normal position.

You can see an animation of the mechanism working below (if you cannot see the animation running below, click on the image and it will open into a larger window that shows an animated image):

This was the first real firing mechanism used in small arms. It wasn't always reliable though - many a time, the gunpowder in the flash pan could be blown off or become wet in the rain, or the slow match could go out. As a precaution against the rain, the slow match rope would be lit on both ends, so that if one end went out, it could be re-lit from the other end. Sometimes when the trigger was pulled, the contents of the flash pan would ignite, but it wouldn't burn through the touch hole and therefore fail to ignite the main gunpowder charge inside the barrel. Such a phenomenon was called a flash in the pan. This phrase is still part of the English language and now means "something which starts off initially very bright and showy, but soon fails to deliver anything of value."

Disadvantages
Nevertheless, matchlock technology stayed alive for a very long time. The Janissary troops of the Ottoman empire were using these weapons in the mid 1400s. By 1526, they were introduced into India by the invasion of Babur, the first Moghul ruler of India. In 1543, a Portuguese vessel was wrecked off Tanegashima island in Japan and some of its crew showed the local Shogun their matchlock weapons, which the Japanese were very quick to clone and use for their own local wars. Well into the 19th century, matchlock weapons were still being used in India, China and Japan. There were even some records of rebels using matchlocks in East Timor well into the 20th century.
Posted by The Editor at 10:32 PM