The flintlock was the next big advance in firing mechanisms. The flintlock was based on a Spanish invention called the miquelet lock. The flintlock took its ideas from the snaphaunce lock, which was itself an improvement over the snaplock. In a flintlock, the pan cover and the steel plate (a.k.a, the "frizzen") are combined together. 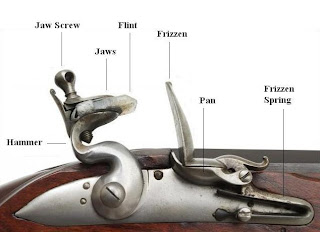 Like the snaplock and the snaphaunce, this weapon has a serpentine hammer, which has jaws at the end, to which can be screwed on a piece of flint. Like the other two weapons, it has a steel (called a "frizzen") facing the piece of flint. When the trigger is pulled, the flint strikes the steel and releases sparks. Here's where the flintlock's innovation comes in. The steel frizzen is shaped like the letter 'L'. The horizontal part of the 'L' covers the firing pan where the priming gunpowder is. So the flint on the falling hammer strikes the frizzen and causes sparks of hot steel to form. As it is falling, it also pushes the frizzen away from the flint, thereby opening the pan cover and exposing the pan's contents. So the generated sparks will fall into the pan and light the priming powder that is in the pan.

While the half-cock position was supposed to be "safe", sometimes a faulty safety mechanism would release the hammer from this position and it would strike the frizzen. Striking the frizzen from the half-cock position wasn't supposed to have enough force to cause sparks to form, but occasionally this would happen and the weapon would discharge. This is the origin of the modern-day phrase "going off half-cocked", which means "to take a premature action".

Flintlocks stayed with us for a very long time. The mechanism was invented in the 1600s and was used till at least 1850 or so. Some flintlock weapons are manufactured even in this present day, for hunting enthusiasts who prefer to use black-powder weapons.
Posted by The Editor at 10:35 PM