In some of the previous posts, we've discussed matchlocks in detail. One of the major problems of a matchlock is keeping the slow match lit during damp conditions. Another problem is that it is easy to determine the position of a matchlock man in the dark, since the flame from the slow match gives away his position. This second issue is not a problem for large groups of men, but is a problem for individuals who wish to stay concealed.

It is not surprising then that after the wheel-lock was invented, it was quickly adopted not only by sportsmen and hunters, but also by highwaymen and burglars. The technology behind the wheel lock is similar to cigarette lighters and the clockwork wind-up cars that were common during the 1950s to the 1970s. The wheel-lock was first invented in the Nuremberg area of Germany in 1517. 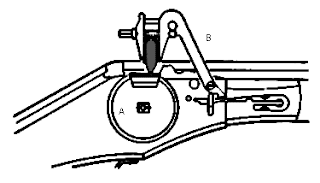 It consists of a steel wheel A which has a serrated edge and a serpentine arm B. On the end of the serpentine arm is a jaw mechanism. As you can see above, there is an item (marked in dark gray) held between the two jaws and the screw around the jaws is tightened so that the item is held in place. This dark gray item is a small piece of iron pyrite. The serpentine arm itself can be placed in two positions. In the first position, the serpentine is moved so that the iron pyrite piece is not touching the wheel and it is in the "safe" position". When it is ready to use use, the serpentine arm is moved so that the iron pyrite piece touches the wheel A and the arm is held in place under spring pressure. The wheel itself is attached to a round mainspring (like the kind used in old wind-up clocks and watches), which is wound tightly using a key. When the trigger is pulled, the wheel is released and spins round and sparks fly from the iron pyrite piece (similar to a modern cigarette lighter). Some sparks will fly on to the pan that is just under the pyrite piece and light the priming gunpowder in there. There is a tiny hole in the pan that leads to the main charge of gunpowder in the weapon's barrel. If all goes well, the gunpowder in the pan burns and the flame travels through the hole in the pan and ignites the main gunpowder charge in the barrel, thereby discharging the weapon. If all does not go well, only the gunpowder in the pan burns and therefore you get the classic "flash-in-the-pan" i.e. a spectacular start, but no results.

To make sure that the priming powder does not get wet in the rain, the trigger mechanism is also sometimes attached to the pan cover. In some models, pulling the trigger does two things simultaneously:
This mechanism has quite a few advantages over the old matchlock:
On the other hand, constructing a wheel-lock requires knowledge in metallurgical techniques such as the ability to make a spring that can be wound up and clock-making technologies in general. So it is no surprise to discover that Nuremberg was also a big clock-making center around the time the wheel-lock was invented (some people even credit a Nuremberg watch maker by the name of Peter Henlein with inventing the first mechanically driven pocket watch).

In the 1500s, clock-making technology was strictly guarded by certain guilds and thus, wheel-locks mechanisms were more expensive to manufacture than matchlocks. There was also the problem of somewhat unreliable springs in early models, but this problem was quickly solved. Maintenance of the parts also required a skilled gun-maker who was familiar with clockwork mechanisms as well.

Due to the cost of manufacturing, wheel-locks were not as widespread as matchlocks. However it was more convenient to use on horseback and also by rich hunters. Soldiers who were in charge of guarding the gunpowder also preferred wheel-locks, since it didn't have a lit fire source unlike the matchlock. Thus there wasn't a danger of lighting the gunpowder supply by accident.

Robbers and highwaymen also quickly adopted it because it allowed one to carry a concealed weapon. It was also popular with assassins for the same reason and thus it was banned by several European city-states and throughout the Holy Roman Empire. By 1532, the Nuremberg city council complained that although law-abiding citizens were not allowed to own wheel-lock handguns, highwaymen and robbers all carried them, so that the law was unenforceable.
Posted by The Editor at 7:57 PM