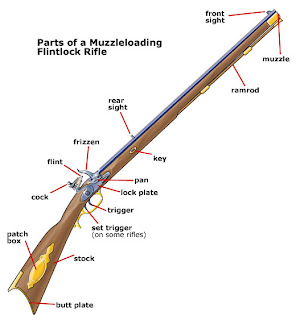 To load the weapon:
This procedure is a bit cumbersome and many developments were done to speed this up. For instance, in the above diagram, you may note that the gun has a compartment (patch box) in the side to store patches of lubricated paper or cloth, so that's one less thing that the user has to fumble around to find.

In later flintlocks, the gunpowder was developed so that there was no need to carry around any separate priming gunpowder. The user would simply pour gunpowder down the barrel and a little would dribble out of the bottom of the barrel through the touch hole into the pan and the user would top it off with a little more from their powder horn. The same gunpowder was fine enough to be used as both a priming powder, as well as the main powder charge.

Then came the invention of the paper cartridge. Instead of the user carrying around a powder horn, a bag of bullets, another bag of patches, a separate horn of priming powder and a measuring flask or two, the user would simply carry paper cartridges, each containing a bullet and a pre-measured quantity of gunpowder. The outer paper casing of the cartridge would be lubricated with grease, lard or beeswax so that it could be used as a patch. The greasy outer casing also had a couple more advantages: it made the cartridge somewhat water-resistant and on firing, the grease or wax would melt and mix with the gunpowder residue, making it easier to clean the barrel. All the user had to do was tear off the top of the paper packet with their teeth, pour the gunpowder in the cartridge into the muzzle, then use the paper to wrap the bullet and push it down the tube with the ramrod. A little bit of the left over powder could be used to fill the pan if needed.

These advances made loading muzzleloaders much faster. The new cartridges were also one of the causes of the Great Indian Mutiny. A rumor that spread among the Sepoys (i.e. Native Indian soldiers) was that the cartridges were greased with the fat of cows and pigs (which were animals revered by the Hindus and treated as offensive by the Muslims) and by tearing the cartridges with their teeth, they would defile themselves.

Muzzle loading weapons stayed popular for quite a while. Famous weapons such as the Brown Bess musket served the British infantry for over 100 years.
Posted by The Editor at 9:50 PM