Due to the price of the wheel-lock mechanism, it was generally only popular among the elites of society and among people who were close to major clock-making centers and had access to the materials and technologies needed to construct one. For instance, wheel-lock mechanisms never really caught on in Russia, China, India or most of Asia in general. The matchlock was still the weapon of choice for the common soldier due to its lower price and simplicity of construction.

However, there was still a need to develop a more reliable ignition system than the matchlock, but without the huge price of a wheel-lock mechanism. That need was fulfilled with the invention of the snaplock system in the late 1540s in Southern Germany. 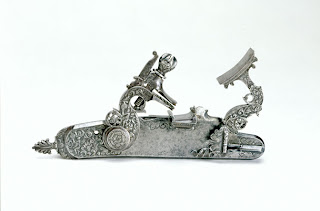 This system consists of an S-shaped "cock" as seen on the left with a clamp on top with two jaws. The name "cock" is because it historically strongly resembled the head of a rooster. In other countries, the shape resembled a dog's head more and therefore is called a "dog" in some languages. In between the jaws is held a piece of flint, which is screwed on between the jaws. To the right of the mechanism was a steel plate (simply called the "steel" or later, "frizzen"). To prepare the weapon to fire, one would move the cock back under spring pressure (so called "cocking the weapon"). One would then position the steel plate so that it was over the pan (the pan is in the middle of the picture above). Upon pulling the trigger, the cock snaps forward with great force due to the spring pressure. The flint piece comes in contact with the steel plate and strikes it hard. The force of this drops hot steel sparks into the pan. The pan contains some priming gunpowder and a tiny hole that leads to the main gunpowder charge in the barrel.

If everything works right, the falling sparks ignite the gunpowder in the pan which burns first and the flame travels through the hole and ignites the main charge in the barrel, which discharges the weapon. If everything doesn't go to plan, no sparks may be generated or sparks may be generated and not fall into the pan or the powder in the pan may burn without igniting the main charge in the barrel (the classic "flash-in-the-pan", a strong flashy start initially with no result).

Like the matchlock, the snaplock sometimes had a cover over the pan to protect the priming gunpowder from adverse weather. Right before using the weapon, the gunner would slide the cover out of the way manually and then fire the weapon.

The resulting mechanism was a lot cheaper to manufacture than the wheel-lock. Like the more expensive wheel-lock, a snaplock weapon could be carried around with the weapon cocked and ready to fire at a moment's notice. The delay between pulling the trigger and the weapon firing was longer for a snaplock and it also had a higher rate of misfire than a wheel-lock. So for those who could afford it, the wheel-lock was still considered a more dependable choice. For the military exchequer who purchased weapons in the thousands, the matchlock was priced lower and hence the common soldier was still supplied with matchlocks. The people who really used the snaplock were mounted knights who wanted cavalry pistols. Hence it didn't see as much widespread use as the matchlock and didn't really catch on until the 1600s.

Even though it didn't see as much widespread use as the matchlock, it was the snaplock that influenced the design of other later firing mechanisms, the Spanish lock (miquelet), the snaphaunce lock, the English lock and later, the flintlock. These mechanisms will be discussed in the following articles. Due to the development of these more reliable firing mechanisms, the snaplock was considered obsolete and a peasant's weapon by the 1640s and fell out of fashion in most of Europe, except in Russia.
Posted by The Editor at 10:22 PM