In the previous post of this series, we've discussed the development of the muzzleloader . Now we will consider the other loading mechanism: the breechloader. To recap, a muzzleloader is loaded via the open end of the barrel (or muzzle). A breechloader is loaded near the closed end of the barrel (i.e.) near the trigger. The barrel is usually opened via a hinge or a plug, the gunpowder and bullet are put in and then the hinge is closed. One of the main advantages of breechloading weapons over muzzleloaders is that they are much quicker to reload. Another advantage is that the shooter doesn't need to expose himself to enemy fire to reload the weapon. With a muzzle loader, one must stand the weapon up vertically, put the safety on, stand up and pour the powder down the barrel and then use the ramrod to shove the bullet home into the base of the barrel. With a breechloader, one simply breaks open the breech, loads in the cartridge and then closes the breech and fires. The figure below shows a 16th century breechloading weapon that opens via a hinge. 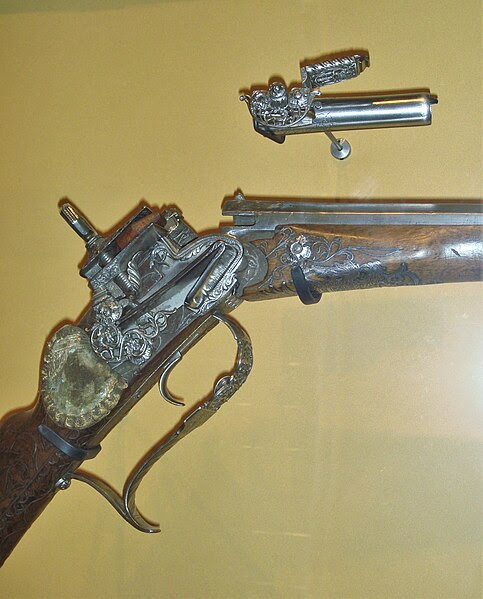 Public domain image courtesy of wikipedia.com
The breechloader mechanism was known in the early history of firearms, but didn't really become popular until around the mid 19th century, because breech loading weapons need more precision manufacturing than muzzleloaders to actually work. After the 19th century, when manufacturing techniques reached the required standards, virtually all modern weapons made since then are breechloading.

The main challenge of breechloading weapons is to find a good way to seal the breech so that the expanding gases don't escape out that way. One of the early ways was by using a screw plug, as in the case of the Ferguson rifle, which will be studied below. The later development of metallic cartridges contributed much more to modern breechloader development.

The Ferguson rifle was invented by one Major Patrick Ferguson of the British Army in 1776. 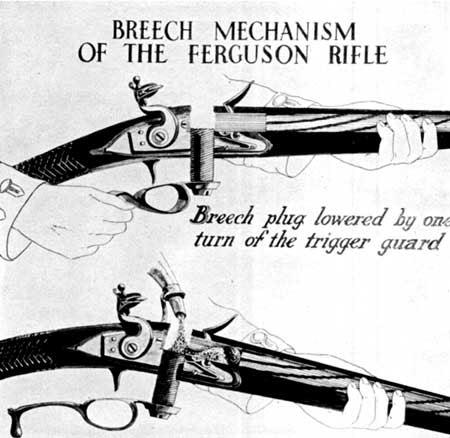 Public domain image courtesy of wikipedia.com
It consisted of a screw plug at the breech, which could be unscrewed by turning the trigger guard. The user would tilt it forward and initially load in a lead ball of a slightly larger diameter than the barrel. The lead ball would roll forward and get stopped by the start of the barrel threads. Unlike most muzzleloaders, the ball did not need to be wrapped in a cloth or paper patch to provide a tight seal, since it was a slightly larger diameter than the barrel. Then the user would pour in some gunpowder to fill the loading chamber and then turn the trigger guard the other way to screw the plug back in. Excess gunpowder in the breech would be sheared off by the screw plug rising back up. Then the user could cock the weapon and be ready to fire. The firing mechanism itself was a flintlock, which was the height of firing mechanism technology at that time. Upon firing, the lead ball would slightly deform and keep the tight seal as it made its way through the barrel.

Such a loading mechanism was already known in Ferguson's time. In fact, one John Warsop had invented a similar mechanism and received a patent back in 1720. However, Warsop's design had a single threaded screw and needed 4 to 12 complete turns to open the breech for reloading. It was also loaded from the bottom and therefore more cumbersome to load. The innovative features of Ferguson's design were:
A good rifleman using a Ferguson rifle could load and shoot up to 6 rounds per minute. Major Ferguson himself demonstrated the rifle to senior officers on a very rainy summer day of 1776 and got their approval. To quote a newspaper of that time,

"Length 50 in.; weight 71/2 lbs.; bayonet 25 in. long and 11/2 in. wide, and being of fine temper and razor edge was called a sword bayonet; folding rear sight with leaves of 100 to 500 yds. The rotating breechblock has 12 threads to the inch, and opens or closes with one complete whirl of the guard. When open, the top of the screw is level with the breech bottom, a ball dropped in slides forward into a chamber slightly larger than the rifled diameter, the muzzle is tipped downward, powder put in to fill the chamber back of the ball, the guard is turned and the screw rises to the top and removes any surplus powder, while making the breech gas tight. When fired, the ball takes the rifling."

Unfortunately, there is a big difference between getting approval and gaining widespread acceptance and orders were initially placed for 300 weapons, of which only 200 were made and these were delivered to Ferguson's own unit (and were withdrawn from service shortly after, in spite of their success in the Battle of Brandywine).

There were a couple of reasons for the failure of this innovative weapon. The first was that the senior military officials didn't think it was manly at that time for soldiers to reload and fire while lying under cover in a prone position. Standard tactics of that era called for soldiers of opposing sides to meet face to face and shoot each other standing up.

The second reason for failure was the cost of manufacturing. It cost approximately 4 pounds to manufacture a Ferguson rifle, whereas a muzzle loading "Brown Bess" musket cost only 2 pounds at that time. It also took a skilled gunmaker more time to make a Ferguson rifle than a Brown Bess. Manufacturing a twelve-start thread screw plug required very specialized skills and not all gunmakers at that time could make those. At a time when the British Army would need to manufacture 50,000 rifles to replace their existing Brown Bess muskets, the total capacity of skilled gunmakers in England who could make the twelve-start thread screw plug was approximately 1000 per year. While mass production technologies for manufacturing were being pioneered during the time that the Ferguson rifle was being developed, no one in England thought to apply them to gun manufacture. It was left to the Americans, specifically Eli Whitney, to do this in 1790.

So despite the success of the weapon in the Battle of Brandywine, Ferguson's superior ordered the rifles to be locked up in a New York warehouse and his own unit was re-equipped with Brown Bess muskets. The remaining orders were also cancelled and thus the Ferguson faded into obscurity. It was not until a century later that breechloaders became popular again.
Posted by The Editor at 10:42 PM