The History of Saltpeter - XIII

In our last post, we saw how various European countries realized that the eastern regions of India were capable of supplying good quality saltpeter and they all fought to establish trading posts there. In today's post, we will study the process of manufacture there in some detail and also why this region produced so much high quality saltpeter.

A few weeks back, we'd studied some details about the conditions necessary for saltpeter crystals to form. We will revisit that now in some detail. The main factors needed are:


As it happens, large parts of India were agricultural in nature, which meant availability of large amounts of wood, plants and cattle. This was particularly so in the eastern regions of Bihar and Bengal, which are plains with the Ganges river flowing through the middle of it, where most of the land was cultivated agricultural country, with a high proportion of domestic animals. These regions have the characteristics of hot summers, strong monsoon rains and presence of limestone in the soil. The farmers living in these areas were also working in conjunction with saltpeter makers for centuries and they had the whole process of manufacturing in sync with the rhythm of the seasons. Other regions in India also had many of these factors, but not as well as Bengal and Bihar. In particular, just three districts in Bihar: Tirhut, Saran and Champaran, were responsible for over two-thirds of all the saltpeter being exported from Calcutta to England annually in the nineteenth century. We have many accounts of the process written by authors such as R. W. Bingham, David Hooper, Arthur Marshall, Leather, Mukherjee and others, about how the industry worked.

During the rainy season, which lasts from June to October, the process of nitrification happens on the warm, moist soil, aided by the addition of organic refuse. This refuse was typically cow dung, wood and straw. Since cow dung and wood were used for fuel in rural India, villagers would collect pats of dung and straw and stick them onto the sides of huts to use later. The nuniahs would also plough special areas in the villages and spread an earth called 'sithi' on top and they had agreements with the richer villagers to let their cattle stand there for half an hour each morning and evening, so that their dung would drop on these special areas. Typically, the soil in these special areas would be so salty that ordinary crops would not grow there anyway, and the nuniahs wouldn't have to go digging about in the regular fields where agricultural crops were grown, thereby keeping everyone happy. The soil's natural supply of inorganic bases was increased by the villagers throwing fuel ashes onto the soil outside their houses and in the special areas. The villagers were paid by the nuniahs in advance, for doing this work during these months and allowing access to the specially prepared areas on their land.

During the end of October and early November, while the rains stopped and fine weather returned, the nuniahs would visit the villages and scrape the walls of the huts and the surface of the soil of the prepared areas up to the depth of one or two inches, using ordinary spades, broken tiles or even shards from a broken pot. They would carry this nitrated soil away in baskets to be stored elsewhere. The nuniahs would return to each prepared field every four days or so (in some areas, they would come every fortnight) and repeat the process, until they had collected as much nitrated earth from the leased areas as they could before the rains returned. They would store this soil (which is rich in nitrates) in 2-4 feet high conical heaps under long sheds about 40x25 feet (or around 12x7.5 meters) where it would be protected from the weather and the precious stuff could not be washed away by the monsoon rains. The sheds would also protect the nitrated earth from direct sunlight and allow the bacteria to do their work for a few months. The amount of nitrated earth collected during this season was enough to easily keep the nuniahs and their families busy for months afterwards, doing the next stage in the process.

During the hot season months of April, May and June, the filtering and boiling process would start. The nuniahs would build earthen filtering chambers (percolators) called "kuria" or "kothi" with wet mud, which was allowed to dry. Each earthen chamber would either have circular walls about 5 to 6 feet (1.5 - 1.8 meters) in diameter or oblong walls, and a floor which slopes slightly from back to front. In the front wall is a hole at the level of the bed, under which a large earthen pot is buried, and the hole allows the nitrate liquor to drain into the pot. Above the bottom of each earthen chamber, a false bottom is laid, consisting of brushwood, bamboos and matting placed on a few loose bricks. 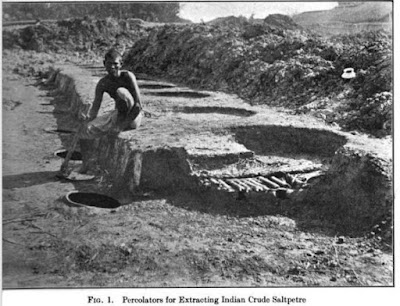 A set of earthen filtering chambers (kothis) used for filtering the saltpeter. Click on the image to enlarge. Public domain image.

In the above image, you can see the man building a series of circular filtering chambers. The false bottom is clearly visible in the chamber in front. Also note the series of buried pots on the left side of the image, one in front of each filtering chamber, to collect the liquid coming out of the filters. The nitrated earth which was stored in the sheds for the previous 5-6 months would now be carefully packed into these chambers, as shown in the image above. Stones are removed from it as far as possible, and the nitrated earth is put in slightly moist and trodden down so as to leave no channels, through which water can run too rapidly or settle in. Wood ashes are generally mixed with the earth, so that the potash in them may convert into saltpeter, the nitrates of lime and magnesia. A small piece of matting is  placed on top of the nitrated earth and water is cautiously poured on top. The purpose of the matting is so that the water that is added distributes evenly. After about an hour or so, the water  passes through the filter and becomes a very strong nitrous brine solution, which trickles out of the hole in the bottom into the collecting pot. The first batch of liquid that percolates through the filter is more concentrated. More water is poured to the top of the filter after the first batch comes through, and subsequent batches of liquid are collected until the liquid trickling out of the bottom is deemed too weak to work, at which point the exhausted soil is taken out of the filter and thrown into a heap, which will be reused later (as we will see shortly).

Meanwhile, the stronger liquid from the first few batches is transferred to a large earthenware or iron pan called a karahi, which is supported by a brick fireplace, where the liquid may be evaporated down (in other parts of India, such as Punjab, the liquid would  be transferred to shallow masonry trays, in which the concentration of the nitrates takes place through the action of the very dry air and the heat of the sun). 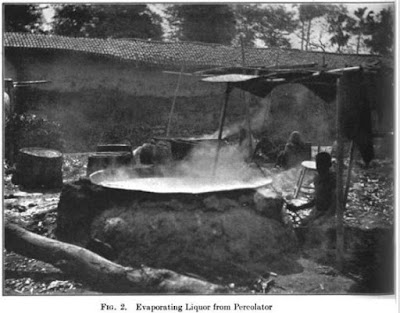 Evaporating the liquid in an iron pan (karahi). Click on the image to enlarge. Public domain image.

You can clearly see the shallow iron evaporating pan in the above image, placed on top of a fireplace. The pan is generally constructed from iron sheets which are riveted together. The liquid is boiled in the pan and lighter impurities, which float to the top, are skimmed off periodically. The liquid is boiled for about 7 hours until it is sufficiently concentrated. To determine this, a drop of the liquid is taken out and placed on a thumb nail. If crystals appear at once, this means the boiling process is complete. The hot boiled liquid is then transferred to open vessels made of clay and allowed to cool and the crystals that are formed are collected next morning, by filtration. The crystals are separated from the liquid and allowed to dry in the sun, but the liquid left behind is not wasted. Instead, it is combined with the next batch of liquid from the earthen filters and the solution is again boiled in the pan to get more crystals and so on.

After several cycles of boiling, the remaining liquid becomes very saturated with salt. At this point, it is thrown on the heap of exhausted earth that was left behind by the filtration process (mentioned three paragraphs above) and left exposed to the air for a few days. This allows the exhausted earth to become nitrated once again, at which point it is filtered and boiled to extract more saltpeter and so on. The nuniahs were very careful to not lose any of the nitrates, because they often owed money that needed to be paid to the villagers and landowners for the next season. Therefore, they always strived to get the maximum yield of saltpeter possible. At the end of the hot summer season in June, the nuniahs would go back to the villages and pay the villagers an advance fee to use their lands for the next season.

The saltpeter refined by this process was somewhat crude and contained some impurities such as sodium chloride. However, it was pure enough (about 50-70% potassium nitrate) to be used for reasonable quality gunpowder, or it could be sold to other people for further refinement to produce the high-quality gunpowder.

In other parts of India, where the climate was drier (such as Punjab in northern India and parts of central and southern India), the crude saltpeter could be extracted by the heat of the sun instead of boiling artificially. We will study that process in the next post, followed by another post or two about the process used to produce refined saltpeter.