The History of Saltpeter - XVI

In our last post, we saw a brief description of how crude saltpeter was refined into a higher quality product in India. In today's post, we will study a detailed description of the process from an actual factory. Our source of this description is an article by Mr. David Hooper, published in The Agricultural Journal, Volume 3, 1905. The author says that his observations are from visiting a refining factory in a village called Jajmou near the city of Cawnpore in the United Provinces of India (now the suburb of Jajmau in the city of Kanpur). Later on in his article, he also mentions the owner of the factory as one Mr. Gurmuk Rai Durga Pershad (or more properly spelled as Gurmukh Rai Durga Prasad). As was mentioned in our previous post, European merchants found it more convenient to deal with the larger Indian refiners, who had well-established connections with the saltpeter men (nuniahs) in all the small villages for generations.

Your humble editor has reproduced the article almost verbatim in red italic font, but has taken the liberty of correcting some spelling from British to American English and has also translated some of the units of measure to both imperial and metric units for the benefit of readers of this blog from around the world. Furthermore, your editor has also in-lined some of his own notes about the process in blue italic font


The Refining of Saltpeter

A saltpeter refinery consists of a large fenced yard with office and godowns and sheds for the factory occupying several acres of land. One portion of the yard is covered with earth suitable for crude niter production. When a refinery is first established, niter earth is obtained (from the nuniahs) and spread on a part of the yard. The salt from the nitrous earth obtained from this area is extracted in the ordinary way with water, and the exhausted earth is spread out on this portion of the yard to receive the furnace ashes and nitrous by-products from time to time. The ashes, soil, and washings are mixed intimately, and fresh niter is constantly generated from the "factory soil." It is a common opinion that such earth is better than new earth collected from outside. At any rate, it is a continual source of crude niter to the refiner, and it enables him to use to the best advantage, all the products of his factory which otherwise might be wasted. (Like the nuniahs, these refiners also tried to extract the maximum amount of nitrate possible from the soil) 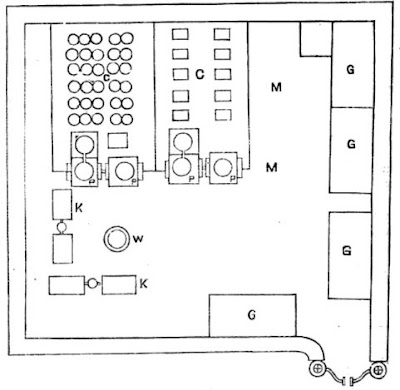 A saltpeter refining factory in Kanpur, India. Click on the image to enlarge. Public domain image.

The accompanying is a sketch of a refinery in Jajmow, Cawnpore, in the United Provinces (now called the suburb of Jajmau in the city of Kanpur in the state of Uttar Pradesh, India). The yard is enclosed with a high mud wall and gate. One portion of the yard (M) is covered as described above with lunamatti or niter earth. At the left corner, there are two pairs of filters or kurias (KK) for extracting crude niter from nitrous earth. A well (W) supplies the water for this process, as well as for making solutions for the refining process. There are four iron evaporating pans (PPPP) supported on masonry fireplaces. Here the niter liquor is boiled. Near each pan is another empty pan or wooden vessel to serve as a settling tank. From this, the liquid is transferred to the crystallizing tubs (C) arranged under the sheds. These tubs are so arranged that each day as two or more are filled, two or more are emptied, and the crystals collected. The round tubs are for making crude niter or small refined crystals; the larger oblong vessels are for the production of the higher quality or kalami saltpeter. One of the most important utensils in the refinery is a boiler or iron pan for evaporating the liquor. The pan is from 10 to 12 feet (3.05-3.66 meters) in diameter and costs Rs. 260; if well made, one will last ten years. It is supported on a brick-and-chunam (limestone) furnace, which is 25 feet long, 15 feet broad and 4 feet deep (or 7.62 x 4.57 x 1.22 meters). Two sloping slides enable men to carry the crude niter to the pan. In the front is the door of the furnace. At the other end nearest the sheds is a cistern of solid masonry or a spare pan. Under the sheds are arranged the crystallizing vessels, which are wooden oblong tanks, 7 feet long, 5.5 feet broad and 2 feet deep (2.13 x 1.68 x 0.61 meters), where the niter crystals form.

The process followed varies in different refineries and in different parts of the country. But as the chloride of sodium is the principal impurity and as its solubility is practically constant, all the processes followed are based on the varying solubility of nitrate of potassium in hot and cold solutions. (We talked about how potassium nitrate  and sodium chloride dissolve differently in water of different temperatures in our previous post.)

To start a refinery, the niter earth obtained from the factory soil is filtered in the two pairs of kurias. The crude niter solution obtained from these is boiled down, clarified by sedimentation and set out to crystallize. In from six to ten days the crystals are extracted and the residual tor or mother-liquor is then available for future use. Crude saltpeter is dissolved in this mother-liquor to which sufficient water or washings are added to keep up the volume. The main supply of crude niter is obtained by purchase from small manufacturers (the previously mentioned nuniahs, who were responsible for making nitrous earth and crude saltpeter crystals and sold their products to the larger refiners, who had business connections with them for generations). A well near the center of the yard supplies sufficient water, usually of a saline character for the operations. When crude niter is dissolved in tor or mother-liquor and the solution is concentrated by boiling in the large evaporation pans, a dirty white granular substance known as sitta falls into the bottom of the pan. The sitta as it forms is removed by means of a large iron spade fixed to a handle 6 feet (1.82 meters) long. The sitta thus obtained is sometimes washed and the washings are returned to the pan. In Bihar, where sitta is not excised, it is mixed with the refinery earth. About 2.5 maunds of sitta is separated from each pan of liquor. At a  factory near Cawnpore, the proportion of sitta was said to be 20 percent of the crude saltpeter.

The evaporation of the liquid in the pan is continued at the temperature of boiling water. In some factories, the froth or scum, called zag, zoga, mail or phain, is removed from the surface at this stage, in others it is removed after transfer to the settling tank. After boiling for three hours, or until the liquid changes from a dark to a light yellow color, the concentration is considered complete. The liquid is emptied out of the pan by means of an iron scoop known as a dal hung at four corners by ropes. Two men stand on opposite sides, each holding two ropes. They deftly raise the liquid in the dal from the pan and pour it into the wooden trough which leads it to the settling tank. Here the hot liquid is allowed to settle for about 2 hours. The scum or zag is taken off with an iron perforated jhara, and the clarified liquor is decanted, or siphoned off with a bent brass tube, into one or more crystallizing vats. At the bottom of the settling tanks is found a substance called matiaree, which is a by-product containing nitrates, and is accordingly carried off and mixed with the nitrous earth in the factory yard. The crystallizing vats under the sheds are filled with niter liquor to about 6 inches from the top. In the United Provinces, on the surface of each is floated a trellis work made of interlaced bamboo sticks (called tattis in Cawnpore). This device facilitates the formation of good crystals. (This is because the bamboo stick framework provides good nucleation sites for crystals to form) After seven days, the bamboo frames are removed and the adhering niter crystals are shaken or picked off, and the crystals at the bottom and sides of the trough collected into a heap and drained. At Kheora, Cawnpore, troughs of two sizes are used. There are some 3 by 5 feet (0.91 x 1.5 meters), which require the liquor to remain eight days, and others, 6 feet (1.82 meters) square, where the liquor remained ten days. The larger the vessels and the longer the liquor stands, the larger and longer are said to be the crystals.

The damp saltpeter is contaminated with the mother-liquor adhering to it, and minute crystals of salt (i.e. sodium chloride), and these must be removed by washing before the salt is ready for the market. Plain water is used for this purpose. Alum is occasionally used for the same purpose as indigo blue to whiten the saltpeter. Alum is also used in admixture with saturated nitrous liquor before it is run into the crystallizing vats, in order to precipitate matter in suspension in the liquid. Bags containing the refined substance are placed over an empty tub or vat, which is slightly tilted to allow the liquor to drain. Cold water is sprinkled from time to time upon the saltpeter through the open mouth of each bag. The water trickles slowly through the saltpeter crystals carrying with it inferior salts in solution. Some saltpeter is also dissolved, but the loss is not great. (This is because potassium nitrate does not dissolve as easily in cold water as it does in hot water; whereas the solubility of sodium chloride is more or less constant. We discussed this in our previous post.)   After the washing, the refined saltpeter is spread out and dried, and after remaining a few hours, is conveyed to the store godown.

The mother-liquor or tor from the crystallizing vats and all washings of the refined saltpeter, and of the settling and setting vats and of sitta are returned to the evaporating pans and used for dissolving fresh crude niter. It is thus seen that the utmost economy is practiced at every stage of the refining process, and, practically speaking, no niter is wasted.

One evaporating pan is capable of dealing with two boilings (40 maunds (3291.44 lbs. or 1492.97 kg.)  of crude niter) per day. The boiling begins early in the morning and is finished by midday. It is calculated that one maund of crude niter according to its quality will yield from 15 to 23 seers (37.5 to 57.5 percent) of refined niter.

The fuel used at Hansi is cotton stalks, and costs Rs. 1 per day. At other factories, other cheap fuel, such as dried castor stalks and wild shrubs, is used.

The author goes on to mention that a sample of saltpeter refined from a factory similar to this yielded the following in a chemical analysis:


This was sufficient purity for manufacturing cordite in the Government factory, which only specified that the sample must contain not less than 95% potassium nitrate and less than 0.85% sodium chloride.

The average amount of saltpeter (both crude and refined) exported from India to the world kept rising until it reached a high mark in the 1850s of about 30,000 tons yearly, falling down to about 20,000 tons yearly by the early 1900s, with the advent of smokeless powders and the discovery of nitrate deposits in Chile. In our next couple of posts, we will study how the British managed to secure their supplies of saltpeter in India, as well as the refinement process of crude saltpeter from India in England's Royal Waltham mills.