The History of Saltpeter - XVII

A few posts ago, we left off with the Portuguese discovering a sea route to India and Asia, followed by other European powers, notably the English East India Company, which started exporting saltpeter from India to England. In today's post, we will look into some of the history of how the English managed to secure their sources.

During the first few decades of European exploration in Asia, most countries were interested in trade mainly. In fact, most European countries were not interested in colonization until the late 18th century. The only reason that some of them started spending for military hardware initially was to protect their trading interests from their other European rivals. The one exception to this rule was the Dutch, who were already fighting a war in Europe against the Spanish and the Portuguese in the 1600s and attacked their overseas bases as well, aiming to destroy them and cut into their trading networks. Gradually, the Dutch took over most of the Portuguese bases in the East Indies and replaced them as the largest European traders in Asia.

Meanwhile, India was ruled by many rulers, each with his own small kingdom, and the English negotiated with many of them separately and established small trading posts in all their kingdoms. There were occasional diplomatic spats with some local rulers, but on the whole, peace reigned in about 30 different trading posts around India, and other European countries also had their trading posts in the same areas as well. Then, over in Europe, the War of Austrian Succession (a.k.a., the Seven Year War) started and France and England started attacking each others' overseas settlements as well. Over here in North America, the 3rd French and Indian war (a.k.a. King George's War) was part of this conflict. In India, the English didn't have much manpower at all (they had less than 2000 men distributed over 30 different trading posts in the entire country), and the French attacked and captured the British port of Madras in southern India without too much trouble, as it was defended by fewer than 100 Englishmen at that time. One of the English employees of the East India Company in Madras at that time was a young clerk named Robert Clive, who had only arrived a couple of years earlier. He managed to escape the French prison camp and headed off to another British post in the area. Remember that name, as we will hear of him again shortly: 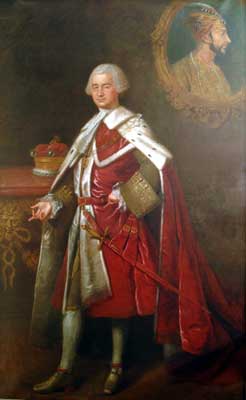 Soon afterwards, a local ruler, who was allied with the English, attempted to recapture Madras on their behalf. However, his large army of 10,000 men were easily defeated by the small French forces in a little known action called the Battle of Adyar River. This particular battle had some very important implications for the future. The French used 300 of their own soldiers and 700 soldiers recruited from the local Indian population and they used a classic European tactic of lining up three ranks of men to successively fire salvos of musket fire and charge up the field, quickly scattering the much larger enemy army facing them. Using local people alongside European soldiers was not a new concept as most European countries had done it already: the Portuguese and Dutch recruited the Ambonese in Indonesia and Spanish allied with the Pampangas in the Philippines, English and Dutch armies allied with Iroquois in North America, while the French did the same with the Huron, Shawnee, Ojibwe etc. Many also used native converts to Christianity and half-Europeans as well. However the main difference was that until this battle, these native troops fought with their own traditional tactics and weapons and were used as auxiliary troops rather than regulars. What the French had done for the first time was train local Indian soldiers to use European weapons, uniforms and tactics. In effect, they had shown that local people could be reliably trained with European tactics and were just as effective in battles, which reduced the burden of bringing over larger numbers of troops from Europe. Meanwhile, the English were watching and learning. Soon after, they started doing the same thing as well, forming units of Indian troops trained in European tactics. Meanwhile, in Europe, the Seven Year War ended with the treaty of Aix-la-Chapelle, whereupon the English returned Louisburg to the French in North America and the French returned Madras back to the English in India (much to the disgust of Joseph-Francois Dupleix, the French general in India at that time).

Over in Bengal, the English and the Dutch formed agreements around the 1720s, to buy saltpeter from Indians together as a single company, so that they wouldn't bid up against each other and drive up the prices. In 1735, the French showed up in the area as well, and the English and Dutch tried to convince the local ruler to restrict the amount of saltpeter to be sold to the French. Meanwhile, larger Indian traders got a whiff of what was going on in Europe and started to move into the business as well.  Therefore, in 1736, the three countries agreed that no Indian traders in their area would be allowed by buy saltpeter around the town of Chapra, where they had their bases. However, in 1740, a rich Indian merchant named Omichund (also spelled as Omichand, Umichand, Omychand and Amir Chand (probably his real name) in some documents) was involved in some intrigue, which resulted in the English and the Dutch in Chapra supporting two opposing local factions and as a result, started bidding for saltpeter separately, contributing to a rise in the price. Moreover, this Omichund had a brother named Deepchund, who became the local big-wig in Chapra by 1745 and forced the local suppliers of saltpeter to sell their stocks to him alone. This meant that the English and Dutch were forced to buy from the brothers. Another saltpeter merchant king of that area was an Armenian named Khwaja Wajid, who had started as an agent of Deepchund. Between the three of them, they manipulated the saltpeter market to their benefit. The English did not forget this easily.

By 1756, the local ruler of Bengal began to have some disagreements with the English and captured Calcutta. The young former clerk, Robert Clive (remember him from above), had risen in the ranks of the East India Company to become an able commander and he was tasked with recapturing it. Meanwhile, the French and English were at war in Europe again and therefore, their bases in India were also at war with each other. After recapturing Calcutta, Clive headed off to the nearby French port of Chandernagore to try and capture it, along with Admiral Watson. Naturally, the ruler of Bengal, Siraj-ul-Dullah, attempted to come to the aid of the French, as he was opposed to the British at that time. Meanwhile, his commander-in-chief, a man named Mir Jafar, planned to depose him and rounded up a few fellow conspirators and started negotiating with the English for their support in this plan. Clive sent a local trader to negotiate between Mir Jafar and the English and the person he sent was (surprise, surprise) Omichund! As it turns out, this Omichund tried to work out a deal for himself, threatening to reveal the whole plot to Siraj-ul-Dullah unless the agreement included a clause for a substantial payment to him. To dupe him, Clive prepared a second document with this extra clause included in it, which he signed (but Admiral Watson flatly refused to). Clive then led a mixed army of 1100 English and 2200 Indian soldiers (they had learned well from the French that native troops could be effectively trained to fight with European tactics) against the ruler of Bengal in the Battle of Plassey. Mir Jafar and two other traitorous commanders ordered the soldiers under their commands to stay away from the battlefield, allowing the English to win the battle and depose Siraj-ul-Dullah. This allowed Mir Jafar to become the new ruler of Bengal. He stuck to his bargain and soon afterwards, the East India Company were granted much more favorable trading rights than their European competitors in the Bengal region (remember, this is the part of India that had the best quality saltpeter production in the world). They also managed to cut out Omichund, his brother Deepchund and the Armenian merchant, Wazid, out of the saltpeter trade altogether. This was the beginning of the British getting involved in political matters in India.

A few years later, the British deposed Mir Jafar and took over the whole of Bengal and started to spread their influence throughout India, but it was the one-time clerk, Robert Clive, who kicked off the whole thing. Robert Clive amassed a fortune and became a Lord in England (though he had to admit the embarrassing situation of forging the document that he showed Omichund to the English parliament later in life) and the rest, as they say, is history.

As the British gradually started extending their influence through India, they could now dictate to the saltpeter suppliers to not sell it to anyone else. And since Indian saltpeter was cheaper than anywhere else in the world, they could effectively price competitors out of the market as well. Soon, they had a monopoly and used it to supply their allies (Sweden, Portugal etc.), while keeping it out of the hands of their enemies (French, Russians etc.). During the US Civil War, they were able to supply saltpeter to both sides and control the action. In fact, a diplomatic spat between the Union and Britain during the Civil war, caused the British to delay a gigantic order of thousands of tons of saltpeter to be sitting at the docks, instead of being shipped to America. This caused C.H. Davis of the US Bureau of Ordnance, Navy Department, to draft a letter to the US Congress in 1862, urging them to fund exploration to find their own sources of saltpeter.

In our next post, we will look at the refinement process of saltpeter in England at the Royal Mills at Waltham.