In our last post, we saw how the Chinese extracted sulfur from pyrites (fool's gold) and used it in gunpowder. In some parts of the world though, particularly in regions containing hot springs and volcanoes, elemental sulfur occurs naturally on the surface of the earth. Some famous locations are Sicily in southern Italy, the Romagna region in northern Italy, some islands in Japan (Iwo Jima, for one), the Ijen volcano complex in Indonesia etc. Today, we will study how sulfur was extracted from these regions in the past centuries. 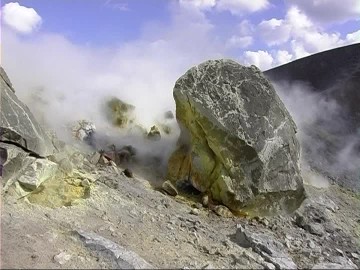 Naturally occurring sulfur at the edge of a crater on Vulcano Island, Sicily, Italy. 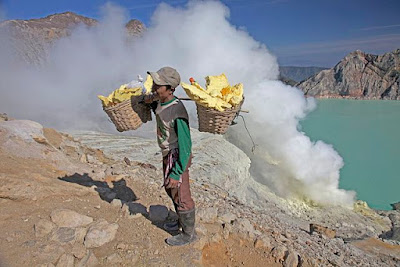 A miner carrying away blocks of sulfur on Kawah Ijen, Indonesia. Click on the image to enlarge.
Image licensed under a Creative Commons license
By Jean-Marie Hullot - originally posted to Flickr as Kawah Ijen, CC BY-SA 2.0, https://commons.wikimedia.org/w/index.php?curid=8753232

Mining for sulfur from Sicily and Romagna regions in Italy dates back to at least Roman times. After the 14th century, as gunpowder technology began to develop throughout Europe, the demand of sulfur began to increase. Several gunpowder mills began to appear near the sulfur mines. In the 19th century, 75% of the world's sulfur production came from Sicily alone, and 5% more from the Romagna region. This meant that Italy accounted for both the 1st and 2nd largest producers of sulfur in the world in the 19th century.

The traditional way of extracting sulfur during the Roman times to the middle ages was to melt it in open pits. Sulfur from Sicilian deposits generally contained from 12% to 50% sulfur, with the other impurities being mainly gypsum and limestone. However, to melt the sulfur, fuel is needed and wood was a luxury in those volcanic regions. Hence, sulfur was used as a fuel as well and was used to melt itself! The earliest recovery technique consisted of placing the crude sulfur in conical mounds over and open pit and covering it with earth. The bottom of the sulfur was set on fire, melting the rest of what remained on the pile, which could be extracted. However, this process wasted a good portion of the sulfur (about 33% was recovered and 67% was wasted) and over the centuries, miners exhausted the sulfur deposits on the surface and had to start digging tunnels into the hillsides to extract the sulfur deposits.

During the Middle Ages, a better technique emerged, using clay pots to distill the sulfur. There was at least two pots employed, called Doppioni (which means "double" in Italian), which were connected by a clay pipe. The crude sulfur was placed in one pot, which was heated on a fire using wood or coke as a fuel. The sulfur would evaporate and the fumes would be led into the other pot via the pipe, where it would condense and be poured into wooden moulds. Meanwhile, the slag remaining in the first pot would be unloaded. Later on, the pots were produced using cast iron. This technique was mainly used in the Romagna region and not in Sicily, because of the way that land mining rights laws were in the two regions.

Instead, in 19th century Sicily, they simply improved on the melting techniques and came up with melting furnaces called Calcarelli and Calcaroni. The main difference between these two was that the Calcaroni was a larger furnace and soil was added to the top of the sulfur heap inside it, to control the combustion.

It consists of a round open-topped furnace, lined with firebrick, with an inclined floor. Calcarelli furnaces tended to be smaller and were typically about 2 meters (6.6 feet) in diameter, whereas Calcaroni type furnaces were larger and about 10-30 meters (about 33-100 feet) in diameter. A cone-shaped pile of sulfur was built up, and in the case of the Calcaroni furnace, a cover plug of soil was put on top of the sulfur. A flame was applied from the top and part of the sulfur burned away, which produced enough heat to melt the rest, which would then flow down the sloping floor and could be collected from a hole in the bottom (appropriately called morte, the Italian word for "death"). The Calcarelli type furnaces would yield about 1/3rd of the sulfur from the ore and took about 2 days to finish the process, only processing a few tons at a time. The larger Calcaroni type furnaces could extract about 50-65% of the sulfur and took about 60-90 days to complete, producing about 200 tons of sulfur per batch. Nevertheless, these were highly polluting furnaces and the sulfur dioxide fumes would destroy any vegetation in the neighborhood, which is why Italian laws prohibited building these furnaces less than 3 km. (2 miles) from any town and only allowed these furnaces to run at certain times of the year so that they wouldn't interfere with growing crops. These furnaces were more inefficient than the Doppioni, but were widely used in Sicily because they allowed large scale processing for cheap. 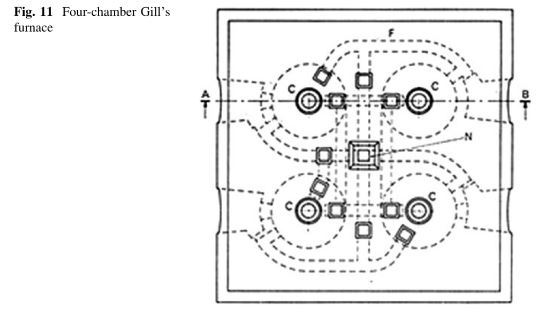 The main innovation of this type of furnace was to reuse the combustion gases from one chamber to heat the next chamber and so on, which reduced the amount of sulfur fumes, allowing a Gill furnace to work continuously through the year. Typical wastage was only around 7-10% of the sulfur and this furnace was widely adopted in Italy -- by 1890, Gill's furnace was used in about 12% of Sicily's production, but by 1905, it was used for about 65% of the sulfur produced by Sicily.

The sulfur produced varied in quality and was generally exported to other distilleries, primarily to Marseilles, France, but also to smaller refineries owned by gunpowder mills, such as Waltham Abbey, where it could be further refined. At Waltham Abbey, best quality Sicilian sulfur came in with about 3-5% of impurities. It was distilled in a large iron pot, provided with two tubes at right angles to each other: The larger tube (about 15 inches diameter) communicated to a large dome-shaped subliming chamber, the smaller tube (about 5 inches diameter) entered an iron pot, which received the distilled sulfur. This tube was surrounded a jacket cooled with water. Valves could be opened or closed in the tubes to connect to or cut off the distilling vessel. The distilling vessel was heated till the sulfur boiled and the valves were initially manipulated so that vapors were sent to the subliming chamber, where the sulfur would deposit on the interior surface as small crystals (called the "flowers of sulfur"). After a while, the other valve would be opened and the vapors sent through the condenser, which would then liquify the sulfur. The liquid sulfur would be allowed to cool a bit, but not enough to solidify. Then it would be ladled into moist wooden molds to solidify into "stick sulfur". The "flowers of sulfur" contained a small percentage of sulfuric acid, formed by the action of the air on the sulfur and therefore, wasn't suitable for the manufacture of gunpowder. The "stick sulfur", on the other hand, was very pure and only needed to be ground up into powder to be used in gunpowder.

The Sicilian monopoly on sulfur production slowly started to decrease at the end of the 19th century, due to an invention by a German-born American chemist in Louisiana. We will study his process in our next post.