In our last post, we saw how Sicily was slowly losing dominance in the sulfur trade and how Britain became a major sulfur producer using the Claus process. In today's post, we will look at how the United States started dominating the business of sulfur production.

In the mid-1800s, the United States was producing sulfur, but only in small quantities. There were sulfur mines found in the Western United States, in Wyoming, Colorado, Texas, Utah, Nevada and California, but the total production of these mines couldn't keep up with demand and therefore, the US also imported a lot of sulfur from Sicily. Then, in 1867, a large sulfur deposit was discovered in Calcaseiu Parish, Louisiana by workers employed by the Lousiana Petroleum and Coal Oil Company (LPCO). Unlike the other places in the US, where the sulfur was found on the surface or close to it, this particular sulfur deposit was buried deep underground in a salt dome, covered by a layer of quicksand. Two years later, a geologist, Professor Eugene Hilgard, from the University of Mississippi, was brought in to study this deposit and he realized that this deposit was large enough to offer an alternative to sulfur imported from Sicily, although mining it would be a challenge. Professor Hilgard later moved to the University of California, Berkeley in 1875 and became Professor of Agricultural chemistry there, where he later studied wine making and his research was responsible for California becoming a major wine maker in the world today.

Meanwhile, LPCO officials decided to go ahead and try to mine the sulfur out of their discovery, but they could not do it because they only had licenses to mine coal and oil, not sulfur. Therefore, they sold their rights to another company, which sold it to another and so on. The problem was that while everyone knew that the sulfur deposit was there, no one knew how to get it out of the ground. Unlike the other sulfur mines, this one was located deep underground and there was a layer of quicksand in between and pockets of deadly hydrogen sulfide gas, that made mining the sulfur underneath impossible. Numerous attempts made in the 1870s and 1880s failed with the loss of many lives.

The solution to getting to this deposit was discovered in 1890 by Herman Frasch, a German-born American chemist. 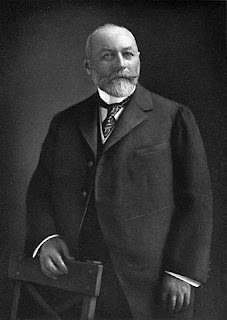 Herman Frasch was born in Oberrot bei Gaildorf, Wurttemberg, Germany in 1851. At the age of sixteen, he migrated to the United States in 1868 and arrived in Philadelphia, where he joined the College of Pharmacy and began increasing his knowledge of chemistry. One of his first inventions was discovering how to separate tin from steel cans. Previously, tin had to be imported from Britain and the cost was passed down to anyone who bought a tin can. Later, he got interested in the field of industrial chemistry, specifically driven by the oil industry. He came up with a process of purifying paraffin wax, which was a waste by-product in oil refining until then, and after his invention, it could be used in many industries, such as waterproofing, candle manufacturing, preserving food etc.

Then in 1885, he came up with a process to remove excess sulfur from oil. Oil with a large amount of sulfur in it was called "skunk oil" or "sour oil" because of its smell and poor burning characteristics, which made it unusable and very hard to sell. As it happened, the Standard Oil Company owned by John D. Rockefeller had found a large oil field in Ohio, where the oil had a lot of sulfur content in it, therefore he brought Herman Frasch in to solve the issue. The Frasch process he developed in 1888 to extract the sulfur from the oil was a huge success on an industrial scale. Previously, Rockefeller could only get about 16 cents per barrel, but after using the process developed by Frasch, he could sell it for over $1 per barrel. Considering that there were millions of barrels of oil sold, this made Rockefeller very rich. As Herman Frasch was also paid in shares of Standard Oil, he became very rich as well!

However, Herman Frasch wasn't done yet. He set his sights on the sulfur deposit that was found in Louisiana back in 1867 and bought some land there. But as luck would have it, the area containing the sulfur was not on his property. He took out multiple patents for his newly developed Frasch process in 1890 and 1891, formed the Union Sulfur Company in 1892 and then signed a contract with his neighbors to mine sulfur from their land. In 1894, the sulfur was successfully brought to the surface for the first time. 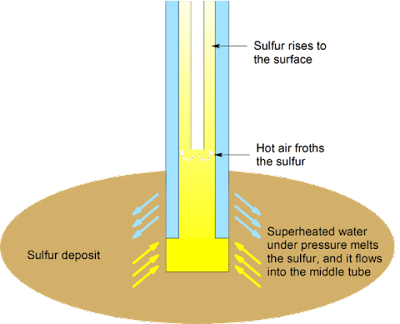 The Frasch Process. Click on the image to enlarge. Public domain image.

The Frasch process consists of using three concentric tubes, which are drilled through the earth into the sulfur deposit. The walls of the outer tube keep the quicksand from collapsing into the hole. Water is heated under pressure to produce superheated water (about 340 °F or 171 °C), which is then pumped in through the outer tube under high pressure. This heat is enough to melt the sulfur, which has a melting point of around 240 °F (or 115 °C). The molten sulfur flows through the middle tube, but since sulfur has a greater density than water, the water pressure is often insufficient to bring the sulfur to the surface. Therefore, hot air is pumped through the inner tube, which causes the molten sulfur to form a froth and reduces its density, which allows it to be pushed up towards the surface. All other substances have a higher melting point and remain underground. The sulfur obtained by this method is very pure (99.7% or greater) and needs no further refinement. The molten sulfur is then pumped into large containers and allowed to solidify in open air and the blocks are then broken up and directly loaded onto rail cars.

One major problem with this method was the cost of fuel for heating the water, but this problem was overcome in 1901 when oil was discovered a short distance away in Spindletop, Texas, which provided cheap fuel oil for the entire region and made the production of sulfur economically competitive with other sources. Due to the booming growth of sulfur mining, a small town was formed in the area around where Frasch built his mine, appropriately named Sulphur, Louisiana! The town of Sulphur still exists today and an elementary school there is named after Herman Frasch.

As a result of this process, the Union Sulfur Company became one of the top sulfur producing companies in the world and the United States displaced Italy as the world's leading sulfur producer. In 1903, Sicily had exported over 157,000 tons of sulfur to the US and 106,000 tons in 1904, but by 1906, they only exported 7000 tons, as the rest was made up by the Union Sulfur Company in America! The mighty Anglo-Sicilian Sulfur Company (ASSC) demanded that Union Sulfur stay out of Europe and demanded a share of the US market, but they didn't know Herman Frasch very well. His process gave him a huge manufacturing cost advantage over ASSC and Union Sulfur started dropping their price to the point where ASSC could not compete any more. By 1907, ASSC was out of business. In 1911, Frasch's patent for his process expired and other American companies in Texas and Louisiana started producing sulfur from salt domes all over the Gulf Coast of the United States.

The Frasch process dominated the world markets until about 1970 or so, when sulfur recovered as a by-product of oil refining and natural gas production (the Claus process we studied in our previous post) became significant again. The last US Frasch sulfur mine closed in 2000, but the process is still used in Mexico and Poland today.